by Brucey
however I suppose that the SPD system was the first system to use the now ubiquitous (in MTB and leisure shoes, at least) two-bolt recessed fitting.

by mnichols
Sorry if this has been covered, but it's a long thread. What is the best way to lube SPD pedals? I just give them a quick squirt with WD40 every so often and after every wet ride or bike wash. Is that ok?

mnichols wrote:Sorry if this has been covered, but it's a long thread. What is the best way to lube SPD pedals? I just give them a quick squirt with WD40 every so often and after every wet ride or bike wash. Is that ok?

Spray with GT85, if you have a compressor blast away, then a few drops of any medium-weight oil (I use my ubiquitous FinishLine Wet) just to keep rust at bay.
I guess that WD40 too can do the job as moisture-displacer, followed by light lubrication of the springs/adjuster. You want oil as it gose in between all the gaps, and will get washed away with time so won't attract an amount of dirt to be concerned of.

Over the years I had tried to regularly grease inside the bindings, with no particular benefit. Have to say that my bikes are always kept in order and is one of the reasons I don't get rust: my finances are not unlimited so my stuff has to last ----> keep it clean!

mnichols wrote:Sorry if this has been covered, but it's a long thread. What is the best way to lube SPD pedals? I just give them a quick squirt with WD40 every so often and after every wet ride or bike wash. Is that ok?

The bindings will work better when they are lubricated but

a) the main problems if you don't lube them are stiff operation and rust on the binding parts
b) the pedal bearings require maintenance (roughly annually for most users)
c) even if you lube the bindings and keep the bearings happy, eventually the jaws wear where they bear against the cleat. You can (with care) compensate for this, but eventually the pedals will wear out this way.

BTW the thread is long but the lead post contains advice on lubrication etc and I have tried to keep it updated as more information becomes available, so please read that.

by Brucey
I've been digging more into the slightly vexed subject of cleat compatibility. It is easy for all newer 'open binding' pedals (SM-SH51 or SM-SH56 only) but not so much if you have older cleats and/or older pedals. There is lots of information out there, and it doesn't help that some of it is wrong (either not correct or wrong by omission) for example this link is useful

but has omissions (even allowing for the date of publication) and contains errors such as suggesting that it is OK to use SM-SH55 cleats with PD-A520 pedals; it isn't. In fact it specifically tells you not to do this in the relevant SI techdoc.

This link is useful

There are two versions of SM-SH51 which I distinguish with v1 and v2 suffixes; this distinction is not made elsewhere. Some pedals which used SM-SH51v1 cleats originally suffer much reduced float when used with v2 cleats. 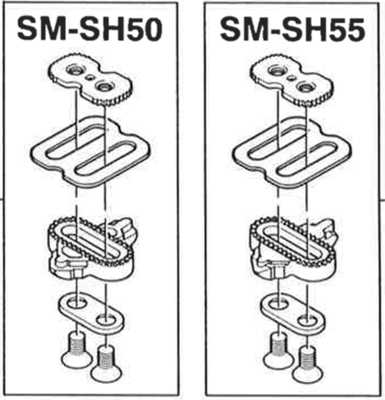 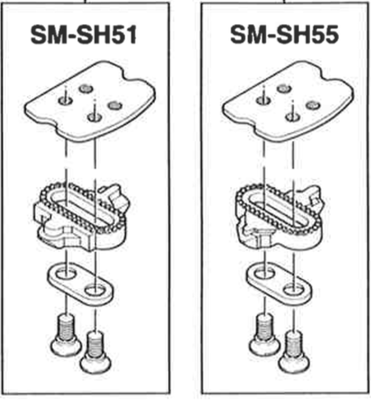 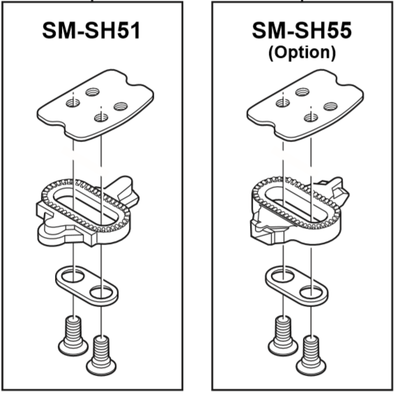 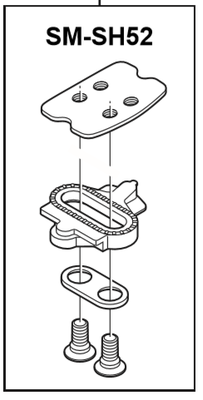 Group D. Applies to PD-M858. No other cleats may be used with PD-858. However SM-SH52 cleats will work with Group C pedals and may also work (but imperfectly) with group B and group A pedals. 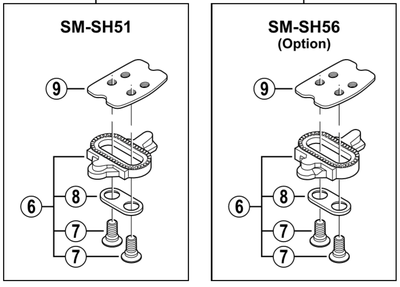 Group E. Applies to all 'open binding' SPD pedals, i.e. all other SPD pedals not mentioned above, using MTB-style cleats, with the exception of PD-7410 and PD-6500 (which use SM-SH70 and SM-SH71). Group E pedals are prohibited from using SM-SH50, SM-SH-52, SM-SH55 cleats. Models PD-M520, PD-M540 and PD-M959 all predated the sale of SM-SH56 cleats so only SM-SH51(v2) is mentioned in the EV techdocs. However the SI techdocs for these pedals were subsequently revised to permit use of SM-SH56 cleats.

The final group E combination represents the only SPD cleats which are recommended for use with pretty much all 'new model' SPD pedals launched since ~2003, which share a common 'open' binding design with PD-M520. So cleat selection for these pedals is easy. Pretty much the only exception (from this century) is PD-M858.

by rogerzilla
I've recently found that some of the earliest SPDs (M525 in particular) have a "V" shaped notch in the rear binding plate, as opposed to the half-moon cutout used on current (and most historic) pedals. This gives zero float with either SH50 or SH51 cleats.

M525 (what MTBers used to call the "DX SPD", M737 being the "XT SPD") may be an oddity anyway; it uses 1/8" ball bearings, not 3/32", and you need an annoyingly-sized 11mm thin spanner (plus an 8mm) to adjust the cone. The 11mm thin spanner is most easily available as a Shimano fishing reel tool!

Most SPDs require 7mm and 10mm spanners, except Dura-Ace SPD-SL pedals with external adjustment, which require 20mm and 17mm. If you want to strip down the latter, SMALL external circlip pliers are needed too.

M324 is the devil's work and has a deeply-recessed inboard race, making ball placement a real sleight of hand, as well as the recessed outboard race that requires the special tool to adjust. I've got M324 assembly down to 10 minutes now; the first one took me 2 hours until I found a very weakly magnetic pointer.

rogerzilla wrote:I've recently found that some of the earliest SPDs (M525 in particular) have a "V" shaped notch in the rear binding plate, as opposed to the half-moon cutout used on current (and most historic) pedals. This gives zero float with either SH50 or SH51 cleats....

With 'group B' pedals similar considerations apply; whilst with SM-SH51(v2) cleats the float is small, it may not quite be zero.

NB In any given pedal, any cleat with a narrow nose (NN) and/or narrow tail (NT) will be subject to more float and faster wear than the fat-nosed (FN) or fat-tailed (FT) cleats

Float in PD-7410 and PD-6500 is determined by the width of the cleat below the nose; see later post on this topic.

by Brucey
More on Cleat compatibility; the note below (from the SI techdoc for PD-A520) makes it clear that SPD with the 'open' binding design should only use SM-SH51 and SM-SH56 cleats. 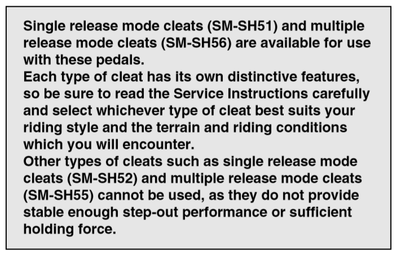 Not included in in any pedal 'group' in the recent post above are PD-7410 (Dura-Ace) and PD-6500 (Ultegra) pedals. These were Shimano's attempt at making a high quality race pedal using the 'small' SPD cleat format. Special cleats SM-SH70 (no float) and SM-SH71 (with float) are specific to these pedals. 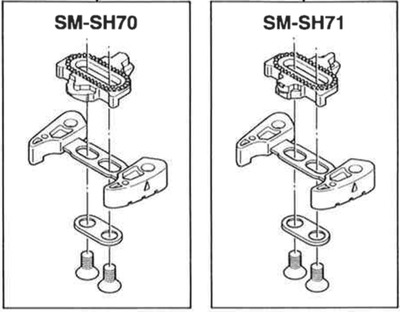 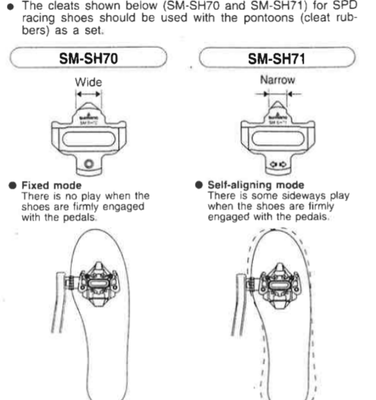 These cleats have 'big ears' so are wider than other SPD cleats and ought to be more stable in use; the pedal platform is also wider to make use of the wider cleat. The 'pontoons' are meant only to do anything much whilst walking; they shouldn't help stabilise the foot greatly when riding. The 70/71 cleats are also the only ones recommended for these pedals although they can work with some others e.g. group C pedals too, provided the bolt heads don't foul on the platform (see the pardo link for details). Shimano don't specify that these pedals can be used with other cleats, but it is desirable that they do; the correct cleats are hard to come by these days. I have tried SM-SH51(v2) and they worked but with reduced float.

As the illustration above shows, the lower part of the cleat nose varies in width (as well as the tail) and this allows differing amounts of float. Modifying SM-SH51 cleats by grinding the nose narrower may give more acceptable amounts of float.

As noted in an earlier post both PD-7410 and PD-6500 use a different centreline offset, so give about 5mm lower 'Q' measurement, at risk of shoes scuffing the cranks. Both pedal models have super bearings and are not too heavy, but likewise both models have pieces of plastic trim that are easily knocked off. Fortunately these trim pieces are not super-important. In truth these pedals are not that much different to use than PD-A515, which is a much less fussy pedal, which will work with any SPD cleat.

The only bad thing about PD-A515 is arguably the paint finish; blue paint isn't everyone's cup of tea, and it soon gets marked up.

by rogerzilla
Will bad things happen if I take the bindings and the alloy spring covers off an M737 body? Thinking of repainting them in the toughest black paint I can find.

by Brucey
I've never taken that model apart, but the EV techdoc

shows it all coming apart OK (although not the steel inserts in the jaws, even though they are held by screws). It even looks as if you can unscrew the binding tension adjuster completely and perhaps relieve the spring tension on the parts.

One comment I would make is that the long screws in SPD pedals don't always want to undo; in some I have taken apart the screws have been troublesome; in one pedal the heads came off the screws instead of them unscrewing. I think there must have been a fault with those screws, since they failed at low torque, giving a brittle fracture.

I wonder if they would look good polished? However if the paint is anything like the blue stuff on PD-A515, it won't be easy to remove; considering it scrapes off in use, it doesn't seem to come off at all easily when trying to strip them.

by rogerzilla
I vaguely remember a trend for stripping and polishing them back in the day, but it was pre-Internet so I can't confirm whether it was just a figment of my imagination. I know they always looked very "used" after one or two offroad rides.

by rogerzilla
Everyone called them the "DX" and "XT" models back then. Deore DX, the former second-string group, disappeared in, I think, 1994 and came back years later as a completely different set of components. By then XTR was well-established above XT.
All times are UTC+01:00
Page 5 of 6
Powered by phpBB® Forum Software © phpBB Limited
https://www.phpbb.com/