by rogerzilla
I rebuilt a couple of pairs of M737s from near-scrap condition (A525s are good parts donors as they are cheap, unwanted and less likely to have been dunked).

I replaced the old plastic lockbolts with SRP alloy ones, since the plastic was looking very grey and tired after 30 years.

by thelawnet
Interesting that they don't (so far as I know) seem to fake SPD's, while SPD-SLs are faked in very large numbers and second-hand SPD-SLs should be treated with great suspicion, and all new ones assumed to be fake unless purchased from a reputable retailer.

by rogerzilla
I've seen dubious clone SPD-SL cleats but not pedals. Are they different inside (e.g. bushes rather than proper bearings)? Do they try to clone the DA pedals with the three bearings and external adjustment?

by Brucey
is it worth starting a separate thread for discussion of fake stuff?

by Brucey
more on cleat compatibility, in relation to 'float'. Most current SPDs when used with current cleats give about five degrees of 'easy' float (i.e. before the jaws start to be forced further open). For some folk this isn't enough, and/or the 'easy' (five degree) float may not be free enough. 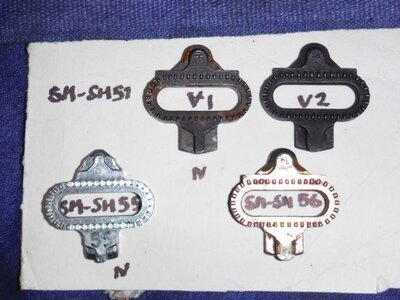 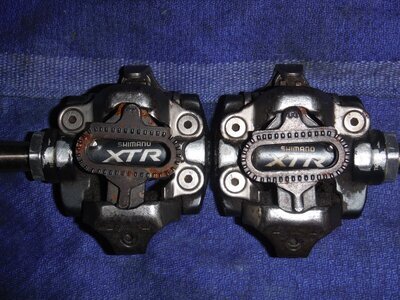 by The utility cyclist
I've been using various non system cleats with Shimano SPD for years.
Wellgo, VP and ETC , all subtly different to Shimano cleats but work just fine.
The pedals are pd-737 and 515s, the former were used the latter new.
Whilst the Shimano cleats aren't a huge amount i came into (a decade and more ago) some multiple lots of cleats plus a job lot of new non Shimano pedals with cleats and attached pedals to bike & kept the cleats.

by Brucey
I've not mentioned 'other' SPD-esque cleats much before now. Some are pretty faithful copies of the shimano cleats (not always copies of the same model...) and others are not. 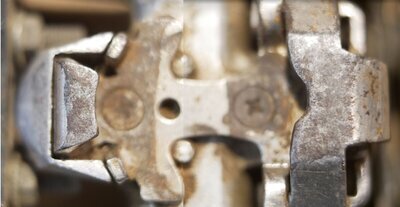 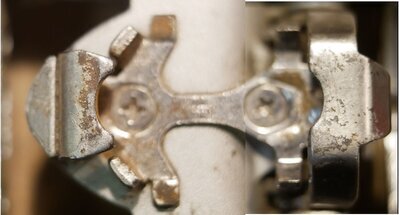 Now you would have thought that using new V2 cleats with your old V1 pedals would restrict the float, since on first consideration you would assume they were not really compatible. I recently got my old PD-M323s back on the road though and in practice they are fine with new cleats and have plenty of float .. certainly enough for me. So I thought I would lab-test this with a static test 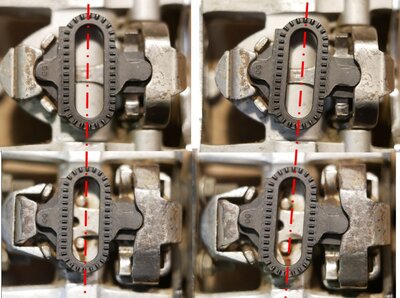 Really not much practical difference in float, at least for "heel in". The older pedal clearly allows less movement at the latch, however the flatter shape of the claw appears to compensate for this, at least to an extent. Obviously this could be a lot more scientific but when I lined up the photos as shown the "zero effort" deflection for "heel in" looked pretty similar on both. (The SM-SH51 cleats were brand new out of the bag, the pedals less new of course

by rogerzilla
New SH51 cleats work fine with original M737 pedals, giving a bit of float and feeling much the same as a new M540.

SH51 cleats in almost-original M525 pedals give zero float (the rear latching plate has a V-shaped cutout, not the usual rounded one).
All times are UTC
Page 6 of 7
Powered by phpBB® Forum Software © phpBB Limited
https://www.phpbb.com/