For discussions about bikes and equipment.
Post Reply
98 posts

A top find with the patents Brucey! Interesting stuff, and Andrew Ritchie's 1980 patent for the Brompton is there. Hours of reading

my small size black one measures 19.5" (CT) in the seat tube and 22-3/4" (CC) in the top tube. The forwards reach is not so great as you might expect because the (effective) seat angle is so slack.

Since I now have a large size black one too, I shall measure that and compare.

This may mean that the forward reach is actually slightly less with the larger frame. Bingo! This may means that it is an even better prospect for conversion to dropped handlebars than the small frame size.

the exact ages of these bikes seem to be unknown. In the UK there were black ones, white ones, and blue ones. I always assumed they were in that order too but have little evidence for this, other than that they were fitted with 3x6, 3x7, 3x7 (*) gearing respectively. The way the graphics are arranged suggests that white and black ones were in consecutive years and the rear dropouts etc are most similar between white and blue ones which suggests that they were also consecutive. None of this is hard evidence though.

[edit; it seems that some blue ones may have been fitted with 6s gearing. Also blue ones seemingly come with 'ovaltech' chainrings or 'roundtech' chainrings. So it is possible that there are two or more specifications possible with blue ones.]


However there are some date marks


My large black one; 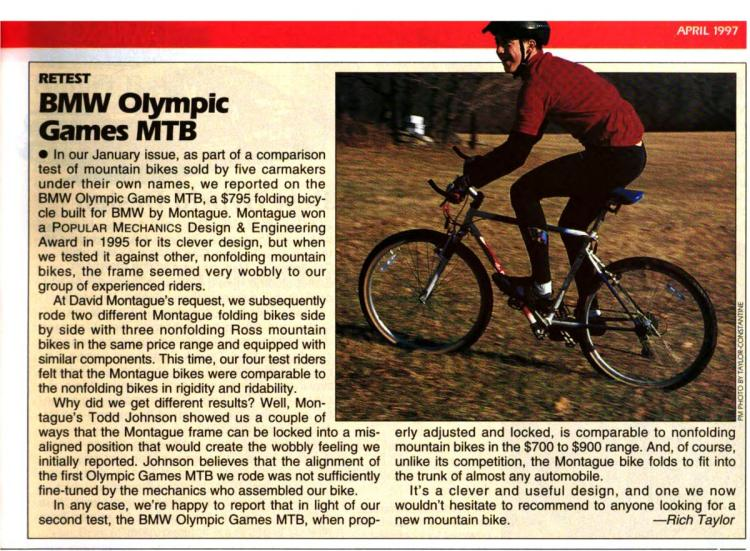 which is interesting. One could take it at face value but for one thing; unlike other similar-ish Montague/Rudge 'concentrus' type machines, the 'Olympic MTB' does not have nesting double seat tubes, and the single seat tube is part of the rear triangle, not the front part of the frame. This means that either

One of the reasons why the Montague/Rudge design is appealing to me is that the frame (with nested double seat tubes as found with all Rudge branded bikes) is as stiff as a conventional bike frame. A small weight penalty to make it fold seems OK to me; all folding bikes are a compromise somewhere, usually in the way they handle, or in wheel size. Note that with the nested double seat tubes, the torsional stiffness of the front part of the frame is maintained even if both clamps are not fully tightened, whereas with the 'Olympic' model, this is not the case.

I have not had the chance to try one made to the 'Olympic' design, but it seems very likely to me that the clamps would have to be 'unreasonably tight' (esp considering that they should be kept greased so they fold easily) if the bike is not to move around torsionally. With a single seat tube, the frame would retain the best torsional stiffness in use if that seat tube were part of the front of the frame, not the rear. However this would raise other issues eg to do with the fold and the BB shell placement.

I note with interest that Montague abandoned the original 'concentrus' diamond frame design not long after this date; all Montague bikes subsequently were build around a different fold design. The new design is lighter but (like every other folder out there more or less) also likely to not ride quite like a normal diamond frame does; another 'folding bike compromise'....

at one point the BiFrame bikes were marketed as 'Montague' branded, presumably either before Raleigh (Rudge) and Schwinn branded bikes were produced, or after. 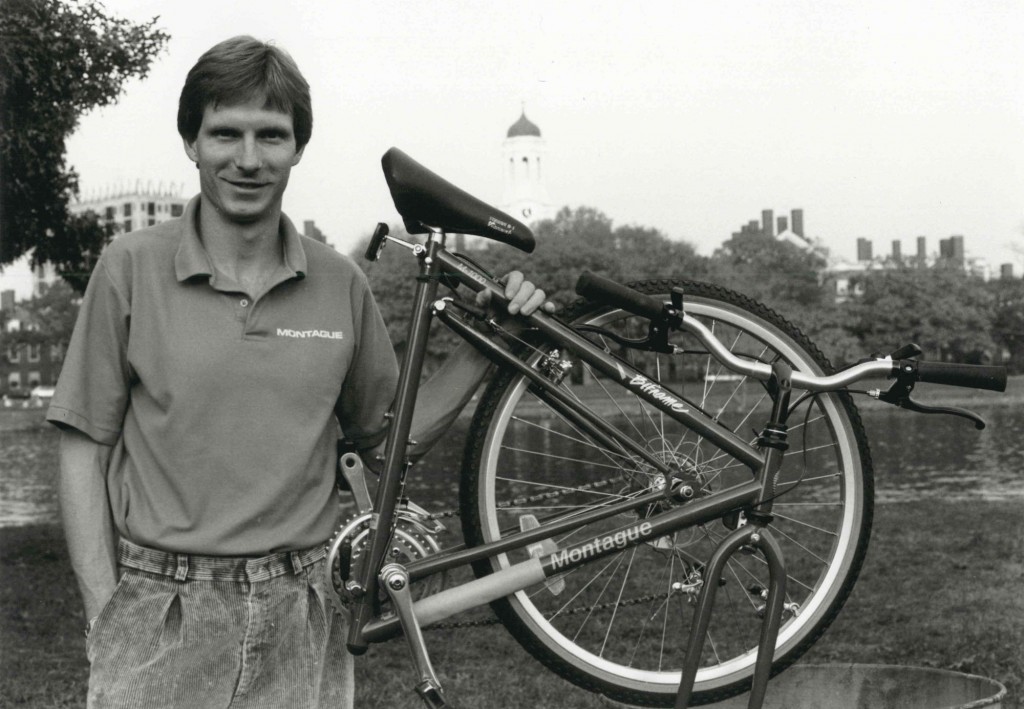 The spec of the parts looks a lot like those found on 'blue' rudges and the frame looks like a white or a blue rudge.

Interestingly on the 2 I have, neither (when checked with a straight edge) was set so both wheels ran in line, a small (and it was very small) adjustment of the grub-screw adjustment corrected it in both cases. Maybe these weren't set up in the factory? or was it a job left to the cycle retailers?
Top

I think that after the bike has been unfolded a few times, it doesn't matter if the grub screws were correctly adjusted or not; they will wear against the seating and the adjustment will need to be repeated, (in a similar way to how derailleur limit screws need attention from time to time).

Brucey wrote:I think that after the bike has been unfolded a few times, it doesn't matter if the grub screws were correctly adjusted or not; they will wear against the seating and the adjustment will need to be repeated, (in a similar way to how derailleur limit screws need attention from time to time).

Mine were both 'worn' the other way though

ie. needed unscrewing to get the correction. The bolt on one could be better aligned, but the other goes in /comes out easily.
Top

Whilst contemplating in the garage today I looked at the Rudge folder and realised.....
I eyeballed the frame with an angle gauge a while ago, lining up the centre of the bottom bracket to the centre of the top of the seat pin to arrive at the 'effective seat tube angle'. All well and good 70.6 degrees IIRC. But what struck me today was that with the Olympic model, having the bottom bracket shell centred on the seat tube (rather than behind as in all other models) makes the seat tube angle (in this case actual angle) something like 69.3 degrees.

judging from the photos they look to have made the seat angle steeper on the 'BMW olympic' models. In fact it looks as if the frame may not fold fully with the rear wheel out (see photo of folded machine on previous page). It also appears as if they have made the BB height quite low for an alleged offroad machine. It'd be interesting to see one in the flesh.

Hmm - difficult to say. It's a job to judge from a photo, but I agree it looks like the angle between seat tube and top tube is less acute, which would indicate a slightly steeper angle. Without seeing one in the metal, it's a mystery

and I think it is good value considering the condition it is in. You can easily pay £50 for a heap that needs at least £50 spent on it; this description applies to the last one I bought.....

I also noticed a 'BMW' 700C model for sale on gumtree recently, (IIRC in the Portsmouth area). This has fairly low-spec parts on it and one or two scratches in the paintwork, but had obviously hardly been used.

[edit; https://www.gumtree.com/p/bicycles/montague-bmw-folding-bike/1329623338 no affiliation to either seller of course.]

Given the unknown future of 559 rims/tyres, has anyone fitted 24in (507mm) wheels to a biframe or montague?

would it reduce the folded size much?

rim brakes wouldn't work any more and the BB would be very low. I don't think the wheel size makes much difference to the folded size; with one or both wheels still in, the reduction is going to be one whole inch. With the wheels out, they don't much affect the package size anyway. FWIW 507 rims and tyres have always been less common than 559 ones; I don't envisage that changing anytime soon.