For discussions about bikes and equipment.
Post Reply
100 posts

jb wrote: , WD type stuff is not oil but thin grease in suspension

WD40 is a light oil and a solvent carrier. It is not a grease. You can lubricate delicate mechanisms (like clocks) with it, where any viscous lubricant would just stop the thing in its tracks.

GT85 is mainly a colourless oil (somewhat thicker than WD40 residue), again in a solvent carrier. It also contains tiny flakes of solid PTFE. Goodness knows if they do any good or not, but they are easily seen under a microscope. I think TF2 is basically the same.

It is easy enough to tell what is in these aerosols; just spray some into the cap and leave it for a few minute/hours/days for any thing volatile to evaporate. That is what I did.

BTW I believe that talk of 'bonding PTFE' to surfaces by letting stuff out of a dropper bottle dry is mostly just marketing BS. If it were that easy, that good etc it wouldn't just wash off. You can make coatings that don't just wash off like that (even if they are still no good in a chain bushing) but it is a fair bit more difficult than that.

The stuff I had evaporated and left a thin greasy gloop in the container, I wouldn't recommend it for good clocks (though I have sprayed it on my old Grandfather clock just to keep it going until I have time to do it properly).

Marketing BS plays more than a little part in the world of lubricants especially if the part involved is not life threatening & potential customers aren't likely to dig to deep.
It may be significant that the only really successfully method employed on motorbikes was/is either complete sealing with o rings in the links or a constant trickle of new oil from such as the Scot oiler(or the Norton patent chain 'and' tyre oiler system

actually WD40 is derived from fish oil or something, I am told. It may vary slightly. Organically drived olls may not be chemically stable in the same way as some mineral oils are; e.g. many vegetable oils polymerise when exposed to air, which is why linseed oil is good on furniture and cricket bats.

However, a friend of mine repairs clocks and watches and he uses WD40 (sparingly) on those, to my great surprise.

Just come back from a 15mile ride.

There was a window in the weather, so off I went. Trouble was, 10minutes after leaving, the heavens opened! I came home drenched - bike too of course.

I'd lubed the chain this morning normally with WL dry lube, and just taken this photograph in the hall whilst the bike is drip-drying. You can see my wet fingers from the wet chain. The roads were filthy with mud off the fields and salt residue.

I'll take another shot later today when it's all dried out. Hopefully, there won't be any rust showing, but the camera never lies - so we'll see.
Click for a closer view. 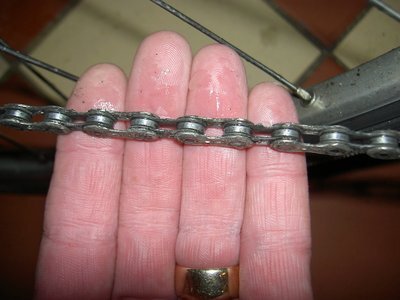 
The contents look like they are derived from crude-oil's refining products (I suppose one could argue that some geological oils are derived from squashed prehistoric fish), rather than oils extracted from living organisms.
Top

-obviously not from someone reliable then!

which bears little relationship to what I saw elsewhere, which seems to be absolute hokum! It has been used to hook some fish alright;... me....!

Prior to that I would have said unhesitatingly that everything in it was a distillery product. Looks like I was right the first time....

Apologies for the misinformation.

I've been using Profi Dry Lube on my (very long, recumbent) chain since August, cleaning and reapplying regularly. Tons of road salt about up here, and so far so good. But I am getting through a lot of it, and at c. £15 per 400 ml spray can including postage it's not cheap. It's recommended by my bike's makers, HPVelotechnik, perhaps because the chain tubes are Teflon-ified and Profi Lube contains Teflon too. Sounds like TF2 (at £5 per 400 ml spray can) might be a better bet - any thoughts, Mick?
Top

The thing with recumbent chains is that being so long each link will swivel on its pin under pressure far less per mile than for a normal short chain so the wear rate is going to be far less anyway. I always try to cram in as much chain as the dérailleur will accept for this very reason.
Cheers

Bike and chain are dry now, so took another shot as promised. 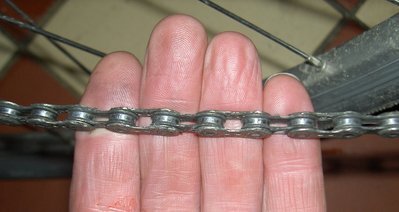 jb wrote:The thing with recumbent chains is that being so long each link will swivel on its pin under pressure far less per mile than for a normal short chain so the wear rate is going to be far less anyway. I always try to cram in as much chain as the dérailleur will accept for this very reason.

Agreed - I've always got very long chain life with my recumbents. I'm expecting even longer life with this one, as it has a Rohloff hub.

Any thoughts on how TF2 might compare with Profi Lube gratefully received...
Top

Mick, I wonder how much salt was left on the road this morning?

I checked the met office rainfall radar earlier on and near Plymouth, between 6am and 7am this morning, it rained for over an hour, at approximate intensities (they said) of between 1/4" and 1/2" per hour.

This is quite a lot of water! On an average single carriageway road, 1/4" of rainfall amounts to about 160 gallons per ten yards of road length, ie. 80 brim-full buckets of water. If asked to clean the road, I doubt many people would ever use that much! And that is before the water runs the length of the road, leave aside whatever pours onto the road from the fields and verges.

I would be surprised if there was very much salt left; asides from the temperature, I'd say there is every chance Micks ride was otherwise much like a wet summertime ride. There are quite a few lubes that will work well enough for this task if they are reapplied regularly i.e. after every wet ride.

By contrast I own a bike that sits outside (with a bare chain) in the rain. It can go for months of daily rain and not show a speck of rust on the chain, provided I use a decent lube (not WL wax- which might last one or two wet rides/days only, I have found). I used this bike a few days ago for a typical winter ride, where it was damp, and hadn't rained hard for several days, but the gritters had been out. I checked the chain this morning and it is (for the first time in nine months) going rusty, in speckles, where the salt has lain on it.

Had we had Mick's Morning Monsoon before, or even during my last ride on that bike, I am quite certain my chain wouldn't be so rusty now.

BTW, I used to put said bike under cover, but the chain rusted quicker if anything; on average, the rain helps to wash the salt off, if, as usual, I can't be bothered to.

The roads were wet. Very wet by the time I was on my way home.

You may be right about the salt being washed off, and no doubt down here in the balmy tropical SW we don't have as much salt as you lot Up North. However, I could see the salt - maybe only in the middle of the roads. Some grey/white, and some brown. It seems they mix and match it here.

I take your point though, but it's only on this thread that the subject of salted roads and dry wax lube has come up. Normally, people complain that wet weather and dry lubes don't go together. I beg to differ a little bit on that, but salted roads - if they are very salted, I cannot comment re WL.

BTW, I put all my filthy wet gear straight into the washing machine when I got home, and my shoes are still drying out. Bike is manky but dry, and may get a wash tomorrow.

I wonder if they use the same stuff in the SW as we get round here?

Round here they use what I think is straight rock salt; when it washes off it leaves no residue; when it isn't quite washed away (e.g. after drizzle, which happens often), then dries, it leaves off-white salty tide marks; no 'grit' per se.

I think in other places they may use different stuff, perhaps a mixture including gritty material where the grit part of the mixture doesn't dissolve per se, but does get washed away eventually. If so, I would suppose perhaps that there could be 'grit' on the road even after the salt in it has dissolved and washed away.


The contents look like they are derived from crude-oil's refining products (I suppose one could argue that some geological oils are derived from squashed prehistoric fish), rather than oils extracted from living organisms.

While he was on secondment to a company in Malvern, a guy rode with us who's job was a research chemist working for MOD. He told us there was little or no difference between WD40 and paraffin. I have no way of confirming that but they do smell similar.
There is your way. There is my way. But there is no "the way".
Top
Post Reply
100 posts