I very recently bought a set of faulty, non-functioning ST-6400 STIs as spares for my working set. I had intended to take these apart to see what makes them tick; something I have so far avoided doing.

However I discovered two things;

1) The defective units might be OK after all; after a clean and lube job they are presently doing a fine impersonation of working STIs. I can only hope that this continues....

2) There are several places on t'interweb where there are various write-ups on STI repair including photos already.

about a dozen or more good quality close-ups of RH 6400 internals.
http://www.flickr.com/photos/troysmith80/8394575672/in/photostream/
same photos in a thread plus other info here;
http://www.bikeforums.net/showthread.php/610670-8spd-Ultegra-STI-shifter-(original-style)-rebuild-guide/page2

Other STIs including later ultegras;

Sheldon Brown (plus other links)

If there is sufficient interest, I can post a few details of how these units work; understanding what should click and when, and the nature of the parts in question, can make the difference between (say) freeing off a sticky unit, and wasting hours on one where there is a broken part inside.

I hooked both shifters up to mechs and they seem to work now; they didn't very well when I started, mind; the left shifter was just sticky all through the range, and the right shifter was stiff on the upshift and sticky on the downshift. After much lubing and working both are much better but the RH shifter is still a lot stiffer on the upshift than my other ST-6400s are. Having studied the photos in the Flickr link I posted, I think I know which part is still stiff, but unless it gets a lot worse I'm not taking it apart just for that.

Of course the LH shifter will only do a shimano road double front mech anyway. It is a one click down, three clicks up shifter. So upwards, it is nudge click, shift click, nudge click.

What were the symptoms before?

loss of shifting at end of range
Top

Thanks for those links Brucey,there's a couple I wasn't aware of

is this not you in this thread, R2?

The Sora units look a lot like minature flat bar STIs inside; lots of inexpensive pressed steel parts. The Ultegra 6400 parts look very much more expensively made inside. I think the latter are intrinsically more durable, but then again are probably more likely to gum up if the grease dries out.

Brucey wrote:is this not you in this thread, R2?

Yes it is,but later,much later,I found that the unit wasn't at fault it was a broken strand near the nipple that caused all the trouble.I'd bought a newish pair of STI's from a forum member and didn't look at the offending article for sometime

The Sora units look a lot like minature flat bar STIs inside; lots of inexpensive pressed steel parts. The Ultegra 6400 parts look very much more expensively made inside. I think the latter are intrinsically more durable, but then again are probably more likely to gum up if the grease dries out.

I've never stripped one down......but very nearly did once

I have however managed to get a 9sp STI set up one click out and as we rarely use top,thought I had shifter problems as it would sometimes not want to stay in bottom the middle cogs were OK.
It went on for a few weeks when we were rarely using bottom until one hilly ride I'd had enough.
I stopped and in desperation undid the cable with it in 8th as I'd no more clicks left.My stupidity then dawned on me

I put it in 9th and reconnected the cable and voila!(or words to that effect)

I thought about throwing my old Shimano Ultegra 10 speed right hand shifter away yesterday. It had been hanging from a nail in the garage for over a ages and I regularly picked it up and tried it out, but nothing changed it was still jammed solid. About a year or so ago I was riding home and the cable broke off. On other occasions I was lucky enough to be able to fiddle about with the lever and index it back to remove the broken off nipple but this time my luck had run out. The item is considered irreparable due to the complexity of its construction. I remembered reading somewhere that someone had managed to extricate his broken cable by drilling a hole adjacent to the area where the nipple had stuck, so nothing gained nothing lost.

Using a new gear cable I pushed the cable into the STI indexing drum slot until resistance was felt, then using a permanent marker I marked the cable at the outer of the slot. Removing the cable I now had an approximate position of where the obstruction was situated. Pull the lever back slightly and using a strip of tape (green gaffer tape on the pic) this simulates the proximity of the slot from the top of the lever. Using another piece of tape run it parallel to the other one leaving a 3.5mm gap.

Measure the gear cable from the end to the mark produced by the permanent marker transfer this measurement to the parallel line starting at the cable entry position down the parallel line and place another mark at it's extreme.

Using a centre punch place a punch mark at this point ready for drilling. Using a vice or suitable clamp position the STI so that the hole can be drilled at right angles to the shifting drum under the alloy lever..Drill a 2.5 mm pilot hole being careful not to damage the drum once the drill breaks through. Open up the hole to 5mm then again to 6.5mm. If you have measured accurately you should be then able to se the offending cable nipple which can be withdrawn using a pair of very small pointed nose pliers or a pair of tweezers. However if you are as luck as me once the cable nipple was pushed home into its housing the indexing system worked again so the cable end could be pushed out at the correct assemble point.

Don't know why Shimano do not fit an inspection/maintenance slot in their STI units to allow for such occurrences, but maybe that is just the point, it would affect sales.

If the pics are a bit jumbled, don't worry as they sort of indicate what I undertook. Basically, establish a line which runs parallel to the drum slot, ascertain approx where the obstruction is, drill a small pilot hole then open it up to 6.5mm and if you are like me hey presto you can see the broken cable to remove. 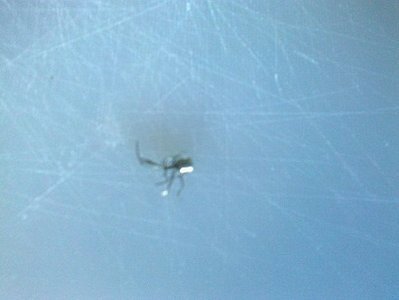 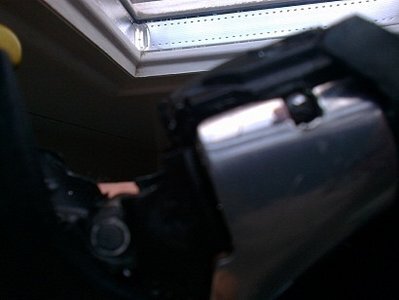 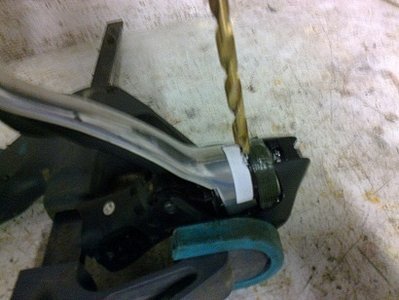 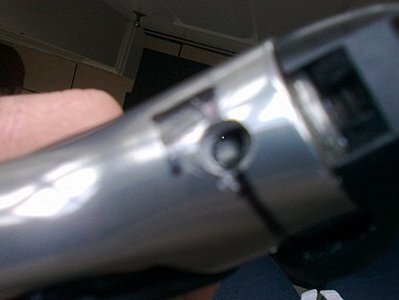