For discussions about bikes and equipment.
Post Reply
82 posts

Brucey wrote:@ cycleruk; a pint of mercury weighs about 7.7Kg BTW... but I guess you have just worked that out....

We used to carry mercury around in stainless steel "bottles" (made from 2" pipe).
If you put it in a large jam jar there was the risk of the bottom falling out.

We had the story of the guy who was pinching mercury by putting it in his bicycle frame.
Unfortunately he dropped the bike going out of the site gate. Problem was he couldn't pick it up.

You'll never know if you don't try it.
Top

mercury is OK in an Iron flask, but it dissolves aluminium.... so trying to pinch mercury inside an aluminium frame could have been interesting....

Brucey wrote:mercury is OK in an Iron flask, but it dissolves aluminium.... so trying to pinch mercury inside an aluminium frame could have been interesting....

I know we are veering somewhat off topic.
I don't know if aluminium frames had been invented then.

We scratched a piece of ali' sheet and put some mercury on it. I can't remember how long it took but little "feathers" started growing out from it.
We did things like this as apprentices - so probably the reason for having a hatters mentality.

You'll never know if you don't try it.
Top

I set up a decent compressor with a regulator on it to give a regulated pressure of 100psi on the (uncalibrated) gauge. I checked the regulated pressure using several gauges and it appeared to be consistent within 0.5psi, (seemingly varying slightly with feed pressure and recent discharge,) which isn't bad for a single stage regulator.

I checked as many gauges as I could get, plus a couple of suspension pumps and five track pumps. All gauges are of the Bourdon tube type (with 100psi near the range midpoint), unless indicated otherwise.

Here are the results I got;

(*) The Presta Valve accugage is one I borrowed from a friend. It is ~25 years old, and the seal is so worn that it isn't easy to take a reading on a threaded presta stem any more. Even so it appears to be in good calibration.

Overall the results are better than I had expected, and may reflect that these gauges may originally have been calibrated and checked at similar pressures, using a similar method. My suspicion is that several of the gauges show an offset error rather than a rate or linearity error. For example the digital gauge shows about the same offset vs the Accugages at ~100psi as at ~40psi.

The track pumps I think have been flattered here; I know that the Zefal pump can show pressures ~ 1bar higher than actual when it is used as a pump; I think that this is because the gauge mechanism is slightly sticky, and can show a different pressure on the way up (as in these tests) vs on the way down. Obviously when pumping, the gauge reads high during a pump stroke and then falls to read a steady pressure, so my test isn't quite representative.

I don't expect all the gauges to read the same pressures at higher and lower pressures than this; Previous tests have shown that the 'Pressographe' presta gauge can read ~120 psi when other gauges show 110 psi, for example.

Bourdon tube gauges have a drive quadrant that moves the needle round; the Bourdon tube end itself is attached to the quadrant with a simple linkage; the deflection of the Bourdon tube end should be linear with pressure (IIRC) but the mechanical advantage to the linkage is not linear except when the mechanism is at mid-travel, which is usually when the gauge is at half scale. Either side of the mechanism midpoint, progressively greater errors are to be expected. Occasionally you will see a gauge with a non-linear scale (at both ends) to try and allow for this but mostly the scale is linear and potentially misleading at the extremes as a consequence.

A common problem with track pump gauges (which might be what has happened to Mick's track pump gauge...?) is caused by temporary overpressuring. This can easily happen if a valve sticks closed; the first few pump strokes can send the gauge off-scale. If the gauge reads (say) 160 psi max, it will be OK to ~180 psi, but more that this (say 200psi), and the drive pinion on the needle spindle will reach the end of the quadrant and may slip round by one or more teeth. A good sign that this has happened is if the needle no longer returns to the zero stop in the same way, and stops short. The gauge will over-read once this has happened, (typically by 5-10% of the range per tooth slipped). Obviously very high pressures may permanently deform the bourdon tube, but the needle index fault can usually be rectified; the method is to ease the needle over the end stop (or remove it), then wind the drive off the other end of the quadrant, allowing it to slip back by one tooth. I have occasionally had to repair Bourdon tube gauges in this way.

Brucey wrote:A common problem with track pump gauges (which might be what has happened to Mick's track pump gauge...?) is caused by temporary overpressuring. This can easily happen if a valve sticks closed; the first few pump strokes can send the gauge off-scale.

Spot on! This can quite easily account for some/most of the differences in the two readings. It never went off scale, but it did read 150odd PSI once or twice. 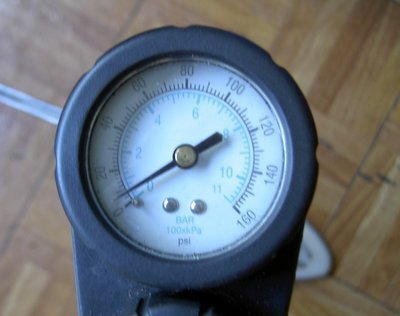 Presta valves can stick sometimes even if you blip some air through them after unscrewing the tip. Previous tubes I've used did this quite a bit, though now I use Schwalbe tubes and the quality of the Presta valves are better perhaps and it happens very rarely now.
Mick F. Cornwall
Top

I have seen several gauges that looked like like yours, and they had all slipped a tooth through overpressuring, every single one.

It takes half a second's overenthusiastic pumping (or perhaps an overshoot when connecting up at high pressure...?) to do it... very easy to do, without knowing.

I think that the gauge doesn't peg back to the stop at zero pressure is a big clue that the calibration may now be suspect....?!

Gonna have a fiddle today. I wonder if they can be stripped down .......
Mick F. Cornwall
Top

see my earlier post, but basically if you can get the face off, lift the needle over the end stop, then wind it backards a bit (i.e. in an ACW direction) you can usually fix it.

If not then a new gauge may work, but it might be the same cost to get a new pump. Living with it (e.g. by just making some marks on the gauge face where your chosen pressures are) might be just as good.

And....in any event you will still need to check the calibration... 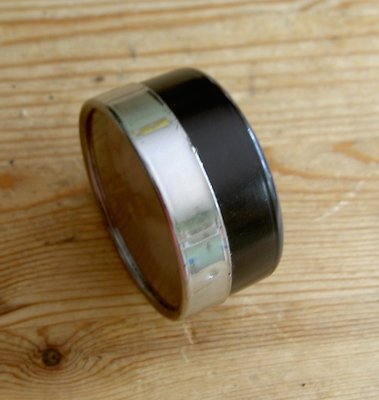 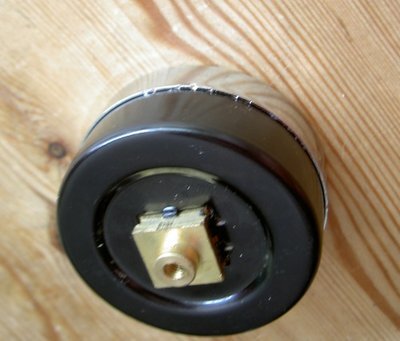 It came out easily enough, but for the life of me I can't get the front off. There appears to be no other way in.

The chrome ring seems to be swaged on - or at least squidged at four points to grip the body. You can see where I've tried to get a small screwdriver into the join to prise them apart.

Any ideas?
Probably the best idea is just to forget about it!
Mick F. Cornwall
Top

Yes the chrome "bezel" will be a tight fit.
Just gentle brute force to get it off.
If you jack the pointer off ( 2 screwdrivers under the centre of the pointer - careful or you will bend the pointer) then undo the two screws, the face will come off. This will reveal the workings..
The other option is to just remove and replace the pointer at zero and re-test. The drawback, if the quadrant has jumped a tooth, is the gauge may not have scale linearity. ie correct at zero, wrong at mid scale, correct at top scale.
This can be put right by resetting the quadrant teeth position.

Personally I would just start with the pointer zero and then test it.
If not linear then fiddle with the quadrant.

Gauges like these are now made in China (surprise) and can cost as little as £3.
You'll never know if you don't try it.
Top

cycleruk wrote:Yes the chrome "bezel" will be a tight fit.
Just gentle brute force to get it off.

I gave up, but I still haven't put the gauge back in, so I may have another go.

£3?
I wonder if I can get one that'll fit.
The pump is a Serfas FMP-200 (now discontinued) from USA - long story how I got one from there, but I didn't spend much on it or the P+P.
https://www.serfas.com/products/replace ... loor_pumps

If you can hold the connector block in a bench vice, you can pry up both sides, or use a small hammer and a block of wood to release the bezel. However if the rear cover is not well attached to the connector block (was there a clip?) , it could all go horribly wrong.

IME both the bezel and the pointer can become an incredibly tight fit over time, even if they were not that tight when they were first installed. I have several times given up trying to remove a pointer, because it was clear to me that something was going to break before it was going to come free as it should. Thus I have taken a view that lifting the pointer end over the stop and winding the mechanism backwards, resetting the sector gear by one tooth is less likely to cause damage in many cases. It is certainly easy enough to do once the gauge is opened.

Brute force with a small screwdriver and a big rubber mallet finally got the chrome bezel to move. With gentle persuasion I got it off.

I pulled the needle off easily enough, then spent a while putting it back on so it was a nice fit against the bottom (zero) stop. In order to get it right, I pressed it on with the needle on top of the stop - so it bent upwards slightly - and when the centre boss was in place, I flipped the needle to the zero point.

I inflated a spare wheel to an indicated 80psi - centre of the scale - then took the hose off. I then tried my digital pressure gauge at it - it read 72.8psi.

When I replace the track pump, it reads way low due to some internal valve system or other and I have to get the hose up to pressure and equalise pressure before the dial reads correctly(?) I bring it up to 80psi again, but the digital gauge is still reading 72 or so.

I wonder if the track pump lets some air out when it's taken off the tyre and therefore allows a lower working pressure.

I'm no better off!

If I inflate to 100psi and leave the pump connected, it stays at 100psi.
If I take the hose off, then replace it, the gauge reads 82psi.

If I repeat as many as six times, the tyre has deflated to below 40psi!

Therefore it's impossible to compare the track pump gauge readings with my digi gauge readings. Because the pump creates losses as it's connected and reconnected, its dial gives false readings.

Do all track pumps do this?
I used to have a Silca track pump but never compared its readings with anything.

the actual tyre pressure drops when the pump is reconnected, because you have to 'inflate' the hose from the limited volume of the tyre, thus dropping the pressure. Connecting and disconnectiing a (small volume) gauge shouldn't do the same thing. Thus if you use your gauge after your track pump, you will be comparing apples with apples, but not the other way round.