Apologies if this has been covered before. My bike is a mid 90's Terry Dolan 531 Pro with a 9 spped Campag groupset. Never been keen on the black Campag Mirage dual pivots so intend to swap them for Veloce or Chorus. The chorus are used and were from a 9 speed in silver. I can get a new pair of Veloce dual pivots in silver but these will be for a 10 speed set up.

My question is: Will the Veloce brakes operate with the correct efficiency with my 9 speed Chorus levers?
Top

Brake pull ratios are universal, with the exception of the latest Shimano Dura-Ace (and possibly also Ultegra) STI levers.
I should coco.
Top

Valbrona wrote:Brake pull ratios are universal, with the exception of the latest Shimano Dura-Ace (and possibly also Ultegra) STI levers.

well if you are talking DPs it used to be, but now... if only it were that simple... we had SLR, then super SLR, now new super SLR... and so it goes on. For compatibility in the current shimano range see this chart;

DeepdalePete wrote: I can get a new pair of Veloce dual pivots in silver but these will be for a 10 speed set up.


Since when do brakes have different speeds?

I get really irritated when I see STi and ErgoPower levers fitted with v-Brakes and the like. Braking is always lousy as the pull ratios are totally incompatible. The exceptions are the v-brake specific levers (I think Cane Creek and possibly some of the Shimano STis but I'd need to look that up ...).

Campag road brakes have been consistent for some time, having said that - the last brakes in the road bike range to run differing pull ratios were the Deltas (part of the reason for their poor rep. at the time was people using them with the wrong levers) and the current TT brakes all work better with the bar-end levers, outside of the road range.

Deep calipers by the nature of things may require, in an idealised world, an adjusted pull ratio as the block movement per unit of cable recovery is different as the blocks are displaced further away from the pivot points ... mechanical advantage lies not only in the lever, but also in the effective length of the brake caliper and to some extent in some designs, the rim to block distance when the caliper is "open" compared to when it is "closed".
Head Technician and Director, Velotech Cycling Ltd,
Nationwide modular mechanic's training in all bicycle types
Campagnolo's main factory-appointed UK Technical and Service Centre
Top

Campag road brakes have been consistent for some time, having said that - the last brakes in the road bike range to run differing pull ratios were the Deltas (part of the reason for their poor rep. at the time was people using them with the wrong levers) and the current TT brakes all work better with the bar-end levers, outside of the road range.

Surprised at this. I have Record carbon 9 Ergos on my Colnago Superissimo, with Deltas, and the setup is fantastic. Outright stopping power is immense (especially on my old Alloy Vento wheels from 1996), yet the brakes can also be finessed to a ridiculous degree. If I could afford 4 more sets of Deltas, I'd put them on all my bikes. The Deltas have also been used with Veloce / Centaur / Chorus Ergos with the same feel and stopping power. Quite simply the best brakes I've ever had.
Top

IIRC Deltas have the most variable MA of any brake commonly available.

The MA goes from 'not great' (on wide rims with new brake blocks) to 'absolutely epic' (on skinny rims and/or with worn blocks), and then to waay too much as the blocks wear more again.

Then (potentially quite suddenly) the brake can stop working because the linkage has run out of travel.

The comparatively small variations in MA between DP and old-school sidepull brake levers are arguably lost in the noise of the MA changes in the caliper through the stroke.

Sadly these brakes are IMHO probably best left for the sunny sunday afternoon bike; if you ride in the wet you can go through all three braking phases (and then into the final non-braking phase perhaps...) in a single long descent. If you use the bike in all weathers the same thing happens even in flat territory, it just takes a bit longer. Back in the day, a chum had Delta brakes and he came within a gnats of having no brakes whatsoever on several occasions. I showed him how to set them up (using what, a 3.5mm allen key...?)how to wrestle with and to cut the cables to length and deal with the mashed ends once you had used the pinch bolt once, and even when to go out and get new brake blocks but it didn't do much good. I explained to him that after numerous complaints about these brakes from professional riders, Campagnolo had quietly reintroduced their traditional side-pull brake and that this was what actually worked properly in the alps. Campag reintroduced the design (with mods calling it 'differential' or something) and it was theoretically available until 1992, but you didn't see that many pros using the brakes on wet mountain stages.

This pic shows the early (on the right) and later (on the left) styles of linkage; 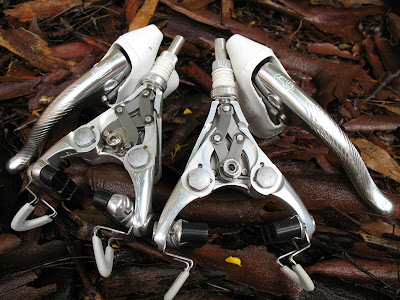 Jobst Brandt has been (with some justification perhaps) somewhat scathing about Deltas.

I think that JB's comments are more relevant to the earlier design. The later one still has a variable MA, but it mightn't be so inclined to kill you; no, I didn't feel tempted to experiment myself....

But Delta's were very pretty... mind you didn't stop me eBaying mine a good few years back!
Top
Post Reply
9 posts • Page 1 of 1