For discussions about bikes and equipment.
Post Reply
43 posts

My current winter bike has a cheap aluminium frame (Kinesis Racelight T2). It is ok round town but on longer rides it is like riding the proverbial plank (going slowly on it is fine but trying to ride faster is unrewarding). All my previous bikes (since I was about 12 anyway!) have either been lightweight steel or carbon and i think this will be my last aluminium bike. I now see that 'planing', in the Bicycle Quarterly parlance, is something I have always taken for granted and that I miss!

I'd like a new frame (or bike). The most reliable option to get a bike that rides nicely is probably an old steel frame of the 'clubman' type. I would quite like to be able to fit wider tyres. Can anyone recommend a new frame that:

1. Has a nice responsive ride

2. Has clearance for 35mm tyres and mudguards

3. Allows a reasonably 'long and low' riding position (I want to stay close to my summer racing position and like my saddle a good bit higher than the bars)

Salsa Vaya seems like an option but not sure if the front end would be too high?

Any help much appreciated.

I was in the market for something similar recently but on paper the Vaya was too high at the front for what I wanted. I went for a Disc Trucker, which is lower. The front is a little higher than my other bikes, and is as high as I want to go, but 10mm extra on the stem and all is well. For me it works well as a road bike; certainly a little less put-the-hammer-down speedy than the lighter ones but it could be build a few pounds lighter (especially the non-disc version) and with narrower tyres and the front end is reassuringly stiffer than its sibling Pacer. The Cross Check might suit you as well: a little lighter. Haven't personally tried any others of the same genre… 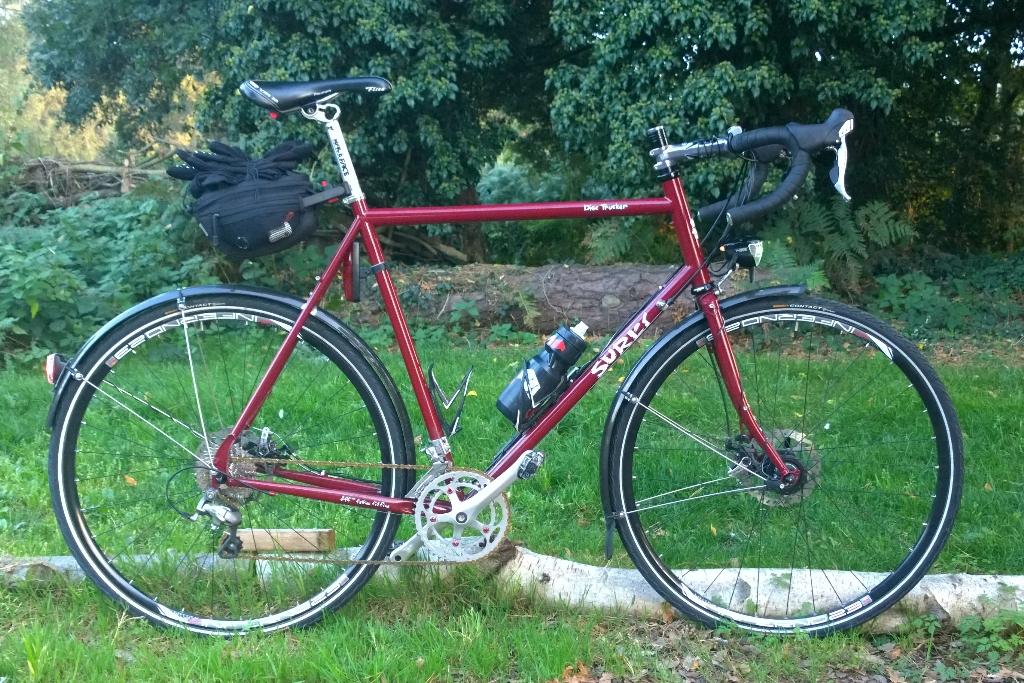 Kinesis ATR, or the Sabbath September AR1. Both rather pricy mind! Other than that, have a look at cyclocross bikes or a Surly Straggler.
http://www.onesti.co.uk
Top

Thanks all. Kinesis ATR is sadly a bit too dear!

Might struggle to get hold of a Vaya in the right size if you're not quick... Ison (previous importers) and Salsa aren't playing any more, so most dealers have stopped getting them. Though I think Charlie the Bikemonger is still getting hold of them. I am also 5' 11" and have a 56cm, which is a better fit than my previous 57cm, but that could be my arm/leg/torso proportions.

Kinesis Decade Tripster ATR is really quite fancy, but the one (and only, they seem rare) frame I saw looked a bit racier than tourish, and uses a tapered headset (is that an issue?). Geometry's here- http://www.kinesisbikes.co.uk/technical ... ipster-atr

As mentioned, the Surly Cross Check (Canti/V) and Straggler (Disc) can do all you ask and indeed are cheap, at least for a frameset. I was struggling recently to get mudguards on a Straggler, but it is the smallest (700c) size frame, and now I've moved the wheel back in the slots (and disc caliper), there's plenty of room (on 37mm tyres with tread). A larger size, as you'd want, would have tons of room.

There's even a 650b Straggler if you really want to emulate the BQ boys! http://surlybikes.com/bikes/straggler_650b/geometry
Top

I think the surly straggler is your best bet, as it has a shortish headtube and will take fat wheels.

The genesis croix de fer is another but I am not sure on how wide you can go with the tires.
Top

samsbike wrote:The genesis croix de fer is another but I am not sure on how wide you can go with the tires.

Steveo2020 wrote: I now see that 'planing', in the Bicycle Quarterly parlance, is something I have always taken for granted and that I miss!
Steve

I wouldn't be so hasty. The third rider in the double blind test couldn't tell any difference.
BQ says the diffrence is small, and the first two riders were attuned to what they are
allegedly looking for, ergo, it cannot be a meaningful double blind test in any reality.

The whole concept is extremely dubious, to say the least, and auto-suggestive.
I cannot see how it is taken for granted when riding carbon frames.

The idea is generally very poor, if thought through at all. There is no
"storage",which would be a relatively trivial feature to include on any
bike above a given torque in the rear hub via a spring arrangement.

Steveo2020 wrote: I now see that 'planing', in the Bicycle Quarterly parlance, is something I have always taken for granted and that I miss!
Steve

...The idea is generally very poor, if thought through at all. There is no
"storage",which would be a relatively trivial feature to include on any
bike above a given torque in the rear hub via a spring arrangement....

I think it is likely that you are being 'hasty' here.

If it were easy to prove or disprove notions like this I am sure that other people would have done it by now. You can argue that the riders were 'attuned' etc but would you expect to do any kind of valid tests using riders that had a poor or variable pedal stroke? Of course not....

ergo, they are bound to be 'attuned' to something.

From an engineering standpoint the basic idea is no more complicated than a trampoline is, and you can't bounce up and down on one of those without knowing what you are doing either. If you had a trampolinist blindfold and asked them exactly how high they were bouncing on different trampolines they wouldn't know for sure within a few percent either, and to expect otherwise is completely unrealistic.

In your simplistic condemnation, you are of course neglecting the fact that a good portion of the load on the pedal near the bottom of the stroke arises inertially; the leg slows down (in the vertical plane) and therefore there is a downwards force on the pedal which you get 'for free'. [In another link I posted recently (which you also condemned for no good reason) there are results that deconvolute the pedal stroke into muscular and inertial components.] It is at this time near the bottom of the pedal stroke that the frame can unwind and it costs you nothing to let it do so.

If the frame is not an efficient spring, then any 'unwinding' action won't be efficient either. People have built 'spring-in-hub' contraptions and they have claimed that they see more power at the back wheel. My take on that is that there may be something real there (needs more tests), but it may be a less efficient (the mechanism will be damped by the bearings whether you like it or not) and more complicated way of doing something that you can do more simply using the frameset anyway. And like any other variant of a bicycle, you might only get the most out of it if you are 'attuned' or habituated to it.

I don't think for a second that it is any coincidence that on the one hand, most experienced cyclists have owned or ridden a few bikes that felt mysteriously 'dead' , and on the other hand the bikes that people enjoy riding most (and go best on) are almost exclusively made of materials that are inherently efficient as springs. [Oddly enough the same thing goes for golf clubs; the longest shots do not come from the stiffest shafts, and materials that are not efficient as springs are not at all favoured for shaft construction.]

Pedal strokes vary quite a lot; at the extremes there are people with 'uncultured' pedal strokes, who just mash the pedals round at all times, (who probably just need a stiff frame really), and at the other extreme there are people who pedal very fluidly, almost beautifully, even when they are pressing on somewhat. Some of these riders pedal so well that it seems like they would pedal perfect circles even in their sleep.

One of my ideas (which I don't think has been investigated elsewhere) is that pedalling consistently well is actually rather difficult to do; certainly I notice that when tired or when plunging into oxygen debt, I am often just not pedalling as smoothly as I would like. It would be easy to waste your effort in a bad pedal stroke like this; often I can just concentrate a little more on my pedal stroke and immediately go a little better for a little less effort. I think that some frames (which flex in a known manner) give you a different feedback through your proprioception system (how does the trampoline feel? Would the trampolinist be able to do what they do if they felt nothing?) and that this may help you pedal better, more of the time. Like many other things, it would be difficult to measure this effect.

I am trying to work that out from the geometry R2; http://salsacycles.com/bikes/vaya/2015_vaya_2/geometry/
Seems to me the reach is more with the longer bike of course, but the only reason you'd get more drop to the bars is by pulling up more seatpost, and the headtube is equally short as the seat tube. What am I missing?

I think my arms are relatively short, but on the 57, I never rode on the drops despite changing stems, spacers and so on to get a better fit, whilst on the 56, they're quite useable.
Top

I dont get it either. The difference in reach is only about 2mm, its the stack that is more by 10mm (to be expected). I am surprised you could not reach the drops with the larger bike, I wonder if the fact it would just feel bigger, made you more uncomfortable e.g. having the toptube that much closer to you, even with a shorter stem.
Top
Post Reply
43 posts