Shimano have long made pretty decent hubs; IME even their budget hubs can work pretty well, and it is really only the lack of seals that compromises them for hard touring/commuting use. So rear hubs such as FH-RM30, FH-RM40, FH-RM50 etc have been adequate OEM parts on a lot of bikes, but they do suffer in our winters, given typical levels of neglect.

Well imagine my surprise when I opened up the latest RM series freehub, the FH-RM70; Good Lord! there are seals, both on the hub bearings and the freehub body!

On the minus side there is also a new body spline, so the RM66/RM70 freehub body doesn't interchange with much else. The spline itself looks the same as the current XT one (edit; in fact, it isn't... the RM70 has a 15T spline and the XT one has a 12T spline....), but the bolt up the middle is a different size, so no budget XT rebuilds either... 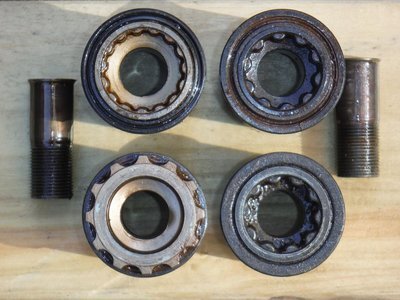 the 'old' spline is seen on the right (versions with and without a seal), the bottom left shows the old RM series spline, and the top left shows the new RM66/RM70 spline. The RM66/RM70 freehub body seats onto a steel washer.

When you open up the hub there is a 'ring in a groove' type seal on the RH side, like this; The RM66 (disc hub version) axle shown above has the same seal both ends. The RM70 has a large external conical contact seal on the left side, with a labyrinth behind that; this system is well proven on Shimano MTB hubs.

The cones are not ground and polished like posher shimano hubs, but experience suggests that these cones will 'run in' and become smoother as time goes on, given a modicum of adjustment and maintenance.

The freehub body itself has a plastic seal piece that comes out relatively easily; and behind that the freehub adjusting cup has four notches in it, like it is all designed to be maintained. This is arguably a significant improvement over many budget freehubs made in recent years, in that the steel dustcap that is usually found in such freehub bodies can be a swine to remove and replace without damage.

Provided the freehub body seal has not yet worn, it is possible to lubricate the freehub body with oil when overhauling the hub bearings, and this should keep things sweet for a long time. Once the seal is a little worn, or there is much play in the bearings, the freehub body will need to be lubricated with something a bit stickier ( like a semi-fluid grease; oil will come out too quickly) and will be more vulnerable to water ingress. But until then this hub should be adequately sealed for UK use, and a regrease once or twice a year should see it last well even in fairly horrible conditions.

Obviously like all cup and cone hubs, the bearings need to be set so that they have a little play in them that disappears when the QR is tightened; if adjusted too tight they won't last.

So there you go; the FH-RM70 model hub (or equivalent RM66 centrelock disc hub) looks to me like a top choice for a budget wheel; sealed freehub bodies like this have until now been the province of more expensive freehubs. Check the model number to be sure, but FH-RM70 is variously sold as 'Acera' or 'Alivio', and costs about £16-£20 for a complete hub.

Hi,
I never looked back after "Freehubs"

So best left alone considering how long they last.

The majority of us with probably just replace the freehub and carry on.

But I have my home made freehub cone tool now......I just cant resist taking it apart

After reassembling the darn thing several times as it languishes in the garage, I am now under the opinion that the shim(s) are stuffed with a bur and therein lies the "notch" every rev.

Having handfuls of freehubs taken from skip bikes, I think my stock will see me out yet.

So who came first on the external spline freehub

I have a copy but no shimano stuff.
NA Thinks Just End 2 End Return + Bivvy
You'll Still Find Me At The Top Of A Hill
Please forgive the poor Grammar I blame it on my mobile and phat thinkers.
Top

NATURAL ANKLING wrote: But I have my home made freehub cone tool now......I just cant resist taking it apart

.....After reassembling the darn thing several times as it languishes in the garage, I am now under the opinion that the shim(s) are stuffed with a bur and therein lies the "notch" every rev...

once you have the tool, it is tempting...

If there is a tight spot it can indeed be a shim issue; the thinnest shim (or the wrong shim from another freehub type; many look similar but are not, quite...) can move sideways and foul the bearings. The other thing that can do it is (of course) a tiny piece of debris. The same piece of debris before (i.e. in a freehub with slack in the bearings) won't cause the same tight spot at all...

A Brucey bin-diving top tip; if you liberate an (oily, with worn sprockets) old freewheel from the LBS scrap bin, and there is no sign that water ever got inside it, you have a very inexpensive source of good quality 1/8" ball bearings. IME they can wear themselves both rounder and closer (in any one race) in size to one another inside an oily freewheel; these bearings are potentially better than any you can buy in a little plastic bag.... Just keep the ones from any one race together. One old freewheel = enough balls to rebuild a freehub body, plus spares.