How much of it is off road/child friendly? Where’s best to park?
Aimlessly Twittering
Top

The majority is off road, a large proportion being tarmaced, any roads you do cycle on are quiet mainly. There is a couple of mile stretch that goes on a path alongside the A583 dual carriageway until you do a left which takes you on a bridge across
it. If you are going to do the whole route I would do it clockwise, there is a steep climb on a cobbley section where the signage says to dismount, easier to push down this rather than up (at Brockholes I think). I think there's a car park at Brockholes just before the hill I mentioned (if you were going anti-clockwise). If you went clockwise from there it takes you alongside the Ribble through water meadows and past a lovely park (Avenham and Miller) and up to the docks, all off road virtually, with a couple of busy roads to cross with light controlled pedestrian crossing, if you didn't want to do it all, that's where I would start.
I join it at Broadgate (see map) as that's my route in from home by bike, it looks like there's plenty of parking in the streets round there, it depends where you're coming from for parking. Here's a link to a ride with a car park as a starting place.
https://www.letsride.co.uk/rides/a-nice ... ld-wheel-7
I've found it a really enjoyable ride , though I've managed to get lost a couple of times even though the path is well marked by signs or 'GW' painted markings on the path itself. Take a map !
Top

Thanks, that’s really useful. I’d probably go to Brockholes as I know there.
Aimlessly Twittering
Top

Top of the cobbled bit , and half way down it looking back up the hill.
20% cobbley slope, under trees what could possibly go wrong ! 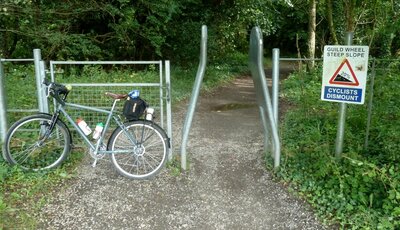 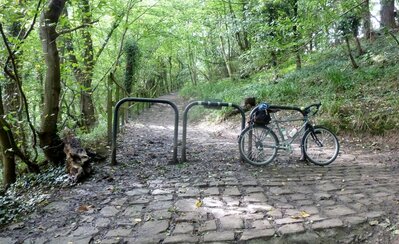 This is my regular circuit. I must say the mention of the hellish bit through Brockholes made me laugh... It's like suddenly you're thrown into some kind of extreme mountain biking hell. Not pleasant on a more civilised variety of cycle, in fact impossible.

I would recommend anyone do the wheel clockwise to at least keep this section as downhill rather than trudging up there pushing their bike especially if it's remotely damp.

Great ride though, but yes the signposting is not foolproof by any means though pretty good.
Top
Post Reply
5 posts • Page 1 of 1