by burroc
I found out yesterday that the Wye Valley Greenway walking/cycle route has opened. From Tintern to Chepstow, including one fairly long tunnel. Apparently it was opened without any publicity early in April to avoid attracting a surge of visitors during these trying times. About 5 miles in length. Perhaps one day it might even connect up to the Pereguine trail from Monmouth to Symonds Yat which would be good.

by rotavator
I walked along part of it last week including the newly reopened former railway tunnel. The tunnel has very dim lighting and you are told not to use lights because it may disturb the roosting bats; at least that means that I was not bothered by cyclists using retina-burning lights. The tunnel is gated and these are locked overnight and over winter but a diversion is signposted.

I found out about from another bike website. I rated it dull as a walk but it would be better on a bike.

by mattsccm
Many of my mates have done it but it has it's limitations I am told repeatedly.
The lack of lighting (bats) means that it can be rather dangerous at busy times. Families with kids cycling seem to be the main issue as the lighting is low and on one side only. It is more use as a tourism gimick than a viable comute as its opening hours are limited and will be less/zero in the winter. The Chepstow end is not ideal but links into Chepstow without busy roads are limited. Tintern is a sort of dead end unless you take to the roads or climb out of the valley.
All in all, great for a touristy day out with the kids.
Extending it up the valley could be possible but there is a lot of private land with no RoW to deal with. I have cycled from Tintern up into the Forest vi Lydbrook but mostly unofficially.
It is a start if such a thing is a good idea.

by rjb
Its worth the climb up to the Devil's Pulpit for the view of Tintern from above. Glad the cycleway is open. It's been talked about for almost as long as the Tutshill sluice crossing over the river Yeo in Somerset which is due to start construction work shortly.

by mattsccm
Better view in the winter I reckon. Less trees. Really cold winter morning when the valley is misted in is great.9

by puffin
Here's a photo I took in the tunnel in June. The camera has made it a bit lighter than my eyes did. The lights are about 3 foot high.

by Tilley
I have ridden the track on a full sus recumbent trike and it is good, but the tunnel lighting will severely limit your speed, and the surface is variable. There are sections which are tarmaced, there are sections which are compacted dust, and there are some sections which appear to be little more than well compacted soil. Nowhere was there any deep mud or washed out ruts. However in the unsurfaced sections the track was dirty, slippery, and uneven, very similar to the towpath beneath the Clifton suspension bridge in Bristol. In this current heatwave the shade offered by the route would be very welcome and it is a ride I plan to do again. I just wouldn't recommend it on a cold wet day.

by essexian
"Paul and Rebecca" have done a Youtube video on the route: https://www.youtube.com/watch?v=YuHJgvQ2ZG8

by Bmblbzzz
I rode it back in the spring, can't remember exactly when but it was an extremely wet day. The path gets very muddy in places. I haven't walked it but I think it might actually work better as a walk, due to the mud and the dark tunnel. I agree it doesn't make an obvious commuting route, as much due to the mud as anything else, though I'm sure some from Tintern area will find it a useful link into Chepstow, but it does make a good route from Chepstow to Tintern avoiding the A466 and its draggy climb.

by john.newell
Please don't forget that the path closes for the winter at the end of September each year.
Even during the summer the opening and closing times for the gates at the tunnel entrance change depending upon the month.
Check the website for details.

by Bmblbzzz
When you say "the path closes" presumably that's the tunnel? I don't see how they could close the rest of the path. Or do they? Or is this to be determined?

Bmblbzzz wrote: ↑14 Sep 2021, 8:29am When you say "the path closes" presumably that's the tunnel? I don't see how they could close the rest of the path. Or do they? Or is this to be determined?

Just the tunnel, there is an alternative cycling route marked in blue on the attached map, also pic of the tunnel opening times. The tunnel is good fun to pass through what with the low level lighting and dripping water, very atmospheric! 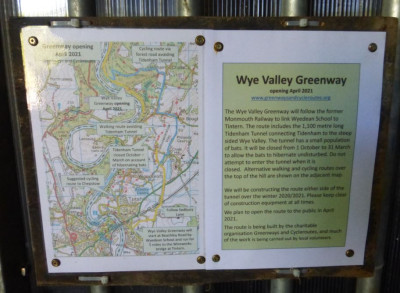 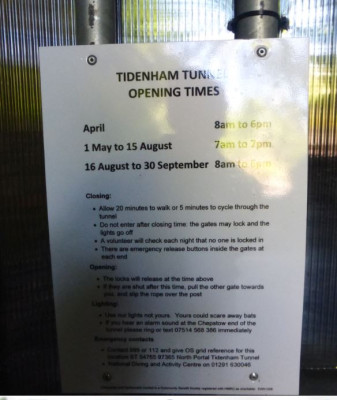