Could be much better worded however.
Top

I shall not be signing

Accelerating out of trouble? Maybe the faster e-bikes could be required to use the road not cycleways
The increase mentioned is quite small, might not change much

Maybe one day motors could be limited to x and cyclists to y (x<y)
Entertainer, kidult, curmudgeon
Cycling-of course, but it is far better on a Gillott
We love safety cameras, we love life "597"
Top

Not interested. My ebike is electric assist. Helps me up hills. I'm quite happy to find my own way above 15.6mph.
John
Top

Oldjohnw wrote:Not interested. My ebike is electric assist. Helps me up hills. I'm quite happy to find my own way above 15.6mph.

Plus One
Entertainer, kidult, curmudgeon
Cycling-of course, but it is far better on a Gillott
We love safety cameras, we love life "597"
Top

Be careful what you wish for. With greater entitlements comes greater regulation, licensing and revenue generation.
Top

I'd support it. Why not? Why add an engine but set the cut off so low that it is only giving any extra speed on uphills? 20mph seems a decent compromise. Fast enough to keep up with traffic in inner cities with 20mph limits.

For what it's worth the statement on that petition is badly worded and inaccurate. It isn't a 20mph limit in the USA. I believe it varies from state to state. In California there are two limits. 20mph - allowed on bike paths , and 28mph road only. I test drove a 20mph version while I was on tour in California. Absolutely brilliant - effortless 19mph on the flat. If we are going to get non cyclists using them 20mph seems reasonable. 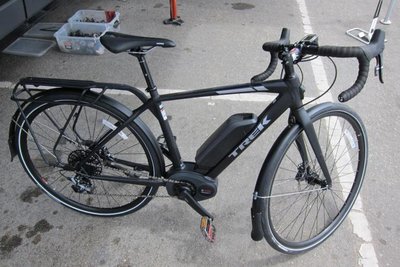 It's not a motorbike. You need to pedal. On a test drive I could use max assist without worrying about battery life even so I was pedaling briskly to get 19mph.

IMO UK e-bikes don't offer enough of a benefit over cycles. That extra 5 mph would help. It's a lot easier taking the lane at 20mph than 15mph.

As for safety an ebike at 20mph has far less kinetic energy than a cyclist at 30.

If we want more bikes including e-bikes. and less cars then a faster cut-off is part of the answer. I would also make bikes and e-bikes VAT exempt.

Is it the case some cyclists just don't want e-bikes overtaking them?
Top

I think 15mph is fine if you're a tootler.
For decently fit cyclists who want to stretch their commute distance (i.e. me) then it's a non-starter.

Fortunately it's a doddle to circumvent.
Top

It's not a motorbike. You need to pedal. On a test drive I could use max assist without worrying about battery life even so I was pedaling briskly to get 19mph.

IMO UK e-bikes don't offer enough of a benefit over cycles. That extra 5 mph would help. It's a lot easier taking the lane at 20mph than 15mph.

As for safety an ebike at 20mph has far less kinetic energy than a cyclist at 30.

My experience of a longish ride on the ladywife's e-bike (a road bike of the endurance style with a 250W Fazua motor) was that it was exactly like a non-motorised bike other than adding strength to your legs. This is what it feels like - as thiough you yourself were fitter. It doesn't go without you inputting effort. The amount of help given by the motor is proportional to the amount of effort you yourself make, detected by strain gauges in the BB and increases or decreased with your own pedalling effort increase or decrease.

WHen out with the club or other riders, you naturally ride with them just as you would on a non-motorised bike, setting your efforts to match theirs - but with the motor adding a bit if your own is insufficient. You can obviously go faster than some who have a leg power less than your own + that of the motor. But that's the case when there are no motors involved but you are fitter than some others.

In short, an e-bike is just an ordinary bike that amplifies your own power a bit. If you apply none, neither does the motor.

*********
The 15.5mph limit does undermine the levels-us-out effect of a club or other group ride that has riders fit enough to go over that speed against the road, wind or slight rise. The e-bike rider will suddenly get weaker at 15.5mph and get dropped.

Many group rides do average a bit above 15.5mph. It would be better if the e-bike gave assistance to a higher speed. Effectively, this is just continuing to amplify your own leg strength for a greater range of speed. It wouldn't suddenly turn the rider into a speed demon anymore than the 15.5mph limit does.

Some claim that e-bike speeds of 20mph are "too fast" or somehow dangerous to the rider and others. Why would this be, since many non-motorised cyclists regularly go at 20mph and well above in safety?

In practice, many e-bikes are a little bit safer than an ordinary bike of the same configuration as they have a lower centre of gravity, making them a bit more stable. The ladywife's Focus Parlane2 goes down hills and 'round corners very well indeed. The extra 5kg of the bike is neither here nor there when it comes to braking, given the weight variation between riders of different body sizes and types.

*****
Many don't really grasp what the e-bike is. It isn't a moped. There's no throttle to send you accelerating and speeding dangerously. It's just a bicycle with a leg-amplifier in it.

I agree with IRC,Kwackers and Cugel
The bike needs to be pedaled to operate it,a pedelec isn't a motorcycle as it doesn't have an independent motor driving it as stated up thread.
The 15.6mph speed IMO is slow for moving with city traffic and as IRC points out 20mph would be more in tune.
The problem is one of responsibility of the rider,though if anyone cares to observe the responsibility or lack of it,of drivers it soon becomes apparent threre's an element of idiots driving cars.These irresponsible drivers cause far more deaths and injury on UK roads than an increase of 5mph of pedelecs ever would.
Yes there may initially be more RTI's with pedelecs but not appreciably IMO,and if they were to prise more people out of their cars for short journeys it can only be a good thing.
As others have stated,the petition is badly worded.

reohn2 wrote:(snip)
There are some people who think the bicycle in it's many unassisted forms is sacrosanct and pure and as such should be kept that way and that any kind assistance for the rider is somehow sullying the bicycle's purity.IMO that maybe OK for them personally,but on our the modern traffic congested roads it isn't that simple,not everyone is in an enthusiastic cyclist or in love with the bicycle in the same way they maybe.
As such some people simply want to get from A to B efficiently,quickly and with less effort,pedelecs offer that,and 20mph pedelecs offer that more so.

People get silly about the semantics, taxonomies and classification in general. We sometimes can't seem to understand that every individual thing is .... individual. A machine that looks like a bike (was based on a bike, even) with an electric motor in it, is what it is. Wot, we can't call it aa bike name (e-bike) because Mr Purist will become upset about the semantics? Pah!

The issue is really: what laws, restrictions and methods of control should be applied to this class of things we've defined as e-bikes. There's confusion about whether to apply bicycle regulations or motorbike regulations. But the answer is easy in that the motor doesn't change an e-bike from behaving exactly like a bicyle. It doesn't make the machine behave in any way, shape or form that is of consequence to the regulatory needs, such that the laws applied to motorbikes should apply.

As you intimate, an e-bike is (like an ordinary bike under the feet of a fitter person) sutable for getting from A to B efficiently and quickly - even if one is not fit. Moreover, it consumes far less resource than does a car. It's also a lot safer and far less dangerous to others. It's an obvious solution to the current transport woes engendered by the car.

So why not make it as efficient a possible without taking away from any of that? It isn't going to make it less safe to give assistance to 20 or even 25mph. No less safe than is an ordinary non-motorised bicycle now.

****
One issue is the cost of e-bikes. They're over-priced. Compare the amount of stuff, and effort to make, to those involved with a car. E-bikes should cost a fraction of what they are now. Some e-bikes are relatively rare, cutting edge or new enough in design/manufacture to need recovery of the R&D. But others are sold in their millions and should be hundreds not thousands of pounds. Why aren't they, one wonders?

Many e-bikes are in the hundreds of pounds (and many non-e-bikes in the thousands), and some of those are perfectly decent bikes (for example http://wooshbikes.co.uk/, but there are plenty of others). The battery is a substantial proportion of the cost of those bikes. We all look forward to cheaper and larger capacity batteries.

Back to the cut off speed. 15mph is plenty for my wife and I, that doesn't make it so for everyone. There are lots safe cyclists riding around at 20 or 25mph without the help of motors, but sadly there are lots of dangerous ones too. I fear putting up the cut off speed would increase that number.
I suspect (completely unproved) that the effort involved in getting to a high speed increases concentration.
Top
Post Reply
14 posts • Page 1 of 1