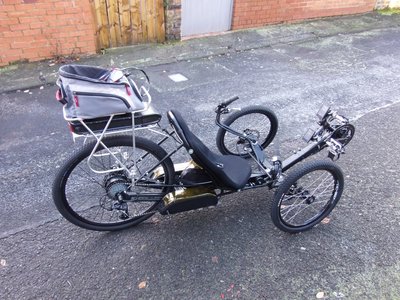 its a strange one, kmx recumbent. twin kits. 36v 250w rear for potering about. and a 48v 750w mid drive for fun and for real fun switch them on together. single 36v rack battery and twin 48v batteries for the big kit.
big Bafang fan lol
Top

How does the transmission get on with all that power to deal with ?
Top

ive done 750w before and KMXs seem to hadle it fine, the secret is to wind it up rather than full blast. the chain will need an upgrade to something stronger. i have tourque roads fitted on the crank and the rear for extra safty.
big Bafang fan lol
Top

Not only that but it has one too many wheels

i like playing with builds, next is a large wind breaker screen. i was tempted to ut a 1000w hd on the front. but recumant chains would struggle i think. with all the weight and the two systems it should be a great hill climber as recumbants can struggle with that. the big issue with doing a recumbent is everything has to be lenthend as ebike kits arnt made to fit. even fitting the screens and making the battery platforms can be a pain.
big Bafang fan lol
Top

also if i really want to i can carry without to much effort, about 2500wh of battery power. even more if i really want as the bag is also made with a lead to hold 2 more soft packs, but if i load it up your talking all told 12kg of batteries, but imagine the range.
big Bafang fan lol
Top

I love it! What's the max speed you can get out of it? Can you carry loads? I've been t humming and hawing about something along these lines for my shopping trips, could easy replace the car.
Top

You don't need over powered illegal bikes/trikes for shopping or hauling whether using panniers or a trailer.
A good 250w motor (esp hub) with a higher amperage controller 20 - 25a and a battery capable of 25a/30a continuous output will easily do the job, which is what I use.
Top

so first i would say that a 250w hub motor with a higher amperage controller 20 - 25a, is not going to push out the power of a 750 bafang mid drive.

but and heres the important but, first if you push 25 to 30a through any true 250w motor, first the motor life will be short, as its not made for it. second really it would be a true 250w motor any more, its like over clocking a computor chip. now at this time theres no way of checking motor watts. but 8a constand draw and 36v is 300w. so lets be honest your 250w at 25a is really a 750, just with a 250w badge. so unless restrict to 15.5 mph still illigal.

peepes view on legaility seems strange. if you want legality then it has to be a 250w motor and really 10a as anything more than that the motors running at more than 250w and 15mph. at some stage mr law will cotton on that many 250w arnt really 250w at all.

now getting to the question on the trike, yes i would think weight wouldnt be an issue. i used the kmx as there heavy built trikes. i also did the 2 kits for good reason. the 250w kit (wheel) will still push it along fine on public roads and because they are 2 seperate kits, should be fully legal on public roads. as to speed, well when i get the creen it will be high. but this was not built for stop speed, it was built for hill climbing power, espesaily of road. recumbent have trouble climbing hills. so all the weight and power on the rear avoids that.
big Bafang fan lol
Top

I agree with Hemo. The main risk with high power controllers will be if you allow high amps when the motor is only spinning fairly slowly. The motor will be operating very inefficiently at low revs, and much of the extra power will be converted to heat which the motor may or may not be good at dissipating.

If you look at https://www.ebikes.ca/tools/simulator.html you can set low speeds and see things like
Overheat In 18 minutes
Final Temp 224 °C
You can set it up for different motors, controllers,speeds, etc
Top

As long as your motor is rated 250w and marked the police can't doing anything as it is legal, a motor marked otherwise (higher) is in law illegal. Unlikely you will be fined or prosecuted though you may be given a warning or bike confiscated if caught, unless involved in an accident and the police involved then things will be likely be different.
Temporary excess power is allowed at 250w, what isn't is permanent power (> 250w constantly), if a manufacturer marks said motor as 250w this is deemed legal.
Only experts and a court of law can determine illegality and for this to occur you would have to seriously hurt someone with you bike or possibly be involved in an accident.
Top

at this moment there, getting round it by rating the motor at 250w, as yes legal. for now as it will be contened on to. if you can push it up to 700w then its not a 250w rated motor. peak power is sopose to be 250w, when the test and rate electric motor bikes, the rated on there peak power so the can rate them agains an exiverlant cc petrol engine.

i would sooner be running a 750 with a false badge that is made to run a 750w than a 250w thats boasted to run higher. either way if they cause an accident and are tested you will be hammered. troble is not the watts, and power. its the top speed thats the big issue. you run a 750w restricted and keep the power for hills, chances are you wont be bothered. pop along the road at 35mph on a mountain bike and you will be pulled.