Any happy (or otherwise) owners here?
TBH when I started thinking about getting some assistance the neatness of the Swytch offering caught my eye but I subsequently found that there are things that I don't much care for (business model - ok for a start-up, but...) and customer service reputation. The nano kit looks tidy but is expensive. The Woosh kit ccomes in at a price I'm comfy with but I'm not impressed with the way they have fitted it in their photos. The semi permanent loss of the front luggage mount might be ok for a dedicated commuting steed but riders venturing further afield would be needing a back pack just to carry their sarnies, not to mention shopping...
I would clearly be looking to pack most of it into a Brompton bag, one of which I already possess. I don't have any objections at all to having to put a bit of work into getting things "Just So" - but has anyone already had a go? Got any tips?
Did the new wheel and its torque arms fit properly out of the box? (apparently an issue with some other sellers)
How do you feel about it generally?
Trying to retain enough fitness to grow old disgracefully... That hasn't changed!
Top

The Woosh kit is purely based on commute purposes and not for touring about.
Top

I'm not looking at it for touring!
Bikes get used for all sorts - popping out for a loaf, going for a spin on a nice day (preferably with drink and snack) or going to work (look around on a bus or train - you won't see many empty handed commuters). If the bike can't carry it then your options boil down to doing without, wearing a backpack or hanging a carrier bag on your bars. Tried all three and would prefer it on the bike in future

Honestly - monopolising the Bromptons main luggage point in this way can't be described as a selling point!
Trying to retain enough fitness to grow old disgracefully... That hasn't changed!
Top

The nano kit looks tidy but is expensive.

I've been a happy nano user since June 2017. I have literally not had to touch anything on it, other than brake-blocks & one chain, since then. The cycle has performed flawlessly, as my main commuter and round-town bike since then - I'm even still on the original battery, a 36V Bosch as per their garden tools... In that respect, I deem it good value for money.
The battery occupies space in the Ortlieb O bag, as pictured, but there's still room for tools, phone, water-bottle and a top. 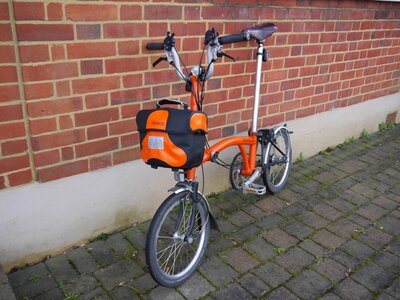 not my bike but gives sense of scale

Yes, I was quite favourably impressed actually, just fighting shy of approaching The Comptroller

Apart from the technical stuff I felt that their own pics showing it on a bike with luggage showed a grasp of reality and that using power tool batteries was an interesting strategy. Can't get away from the cash aspect though!

Do you have the battery installed for every trip? I can reach my local shops unaided so would prefer to have the space available but I realise that there would be loose ends to consider.
Trying to retain enough fitness to grow old disgracefully... That hasn't changed!
Top

Can't get away from the cash aspect though!

Every now & then, I've found I've got what I've paid for... the nano conversion is one example. It's rare indeed that I splash-top-cash for something and it's flawless, as the Brompton nano conversion has been (for me...). Two examples that do not follow that rule that I can think of are Moulton's TSR bikes and Quad's electrostatic speakers - would that they did!!
The excellent & charming Tony Castle did my nano conversion, out of a stable near Marlborough. Tony did a lot of the R&D that ended up on the Brompton 'leccy jobby - even dearer than a nano. He's a great chap for a chat and did a splendid job on my Brompton. I was going to get one of my Moultons done, too, but took another tack, that is to say, am getting fitter (lucky me!) instead. The Brompton was converted a) to get me back into riding after a 5 year gap and b) to do service as commuter/round town transport. As such, I'm toying with the idea of a 'leccy scooter... not that I commute any more.
To answer your Q, I often ride the Brompton unpowered - it feels little different from it's previous plain vanilla un-converted self - in fact the heavy front hub has a slight damping effect on the notoriously skittish Brompton steering, which is to my taste. The Ortlieb bag comes with my most trips, sans battery, as the junction-plug and its tail are a permanent fit in the bag, meaning the battery is slipped into place as & when. The bag is a ready, drop-on, fit and has enough space to cater for most needs - knick-nacks, tools, water, clothing. It is not however anywhere big enough for a shopping trip - other arrangements are made. I still have my original Dutch-made Brompton S bag, which I may get around to tweaking as per the O bag - it's not technically very difficult. Now that would be big enough for a modest shop.
If you want further info., I can send you a review of my Brompton / nano I wrote for the Moulton club mag..
(rides: Brompton nano & ever-changing Moultons)
Top

Apologies for not getting back to you, I've been a bit tied up over the weekend. It could be a form of financial suicide, but it would be interesting to read an owners review - most of the ones I see are from people who have had no more than a fleeting encounter and as an owner you might well touch on considerations that I hadn't previously considered. Come to think of it, I'm sure I'm not alone in that, had you thought of posting it?
I have been contemplating alternative installation plans which , if nothing else, has left me increasingly appreciative of just how well sorted the nano package is. All my own bright ideas, to date, have been flawed - can't find quite the right bits and pieces - I don't mind getting creative, but if you need weather resistant your options are somewhat restricted.