When I first saw this article on the BBC website I was somewhat annoyed by the driver’s actions and to be honest felt like the book should be thrown at the driver. No injuries resulted from the assault but there was a degree of luck to that and the drivers actions indicate a degree of intent to injure, there is also some question as to whether the vehicle was driven within the law.

The CPS and Wiltshire Police have much else to worry about and doubtless scant resources, in this case I think that whilst the driver might regret his actions there is a public interest case for at least a private prosecution (led by say Cycling U.K.). If aggression against cyclists is to be stopped then cases like this should be followed up and the weight of the law brought down on the guilty. We always need to be careful about making examples of people but a bit more justice in this case, and for it being seen to be done, doesn’t seem to be inappropriate.
Top

PS Is there another version of the relevant vid somewhere, especially one showing the earlier part of the incident? I'm unclear whether some posters have seen more than I have or whether they are speculating
Top

For the assault part the caution isn't really much out of line with a comparable incident in other circumstances.

This is just another example to me of the problem of trying to wrap up the privilege to drive with the criminal justice system. A separate, civil, process should be used to determine whether he is a safety hazard to the public behind the wheel. A couple of years in the driving sin bin plus a retest would seem reasonable to me. No exceptional circumstances rubbish of course.
The contents of this post, unless otherwise stated, are opinions of the author and may actually be complete codswallop
Top

Let's remember that the only options available to the court are in line with current law.
Top

biketips666 wrote: ↑17 Sep 2021, 2:50pm Effect of a caution, if the caution the driver accepted was the same as being discussed in this article:

So it may have an effect on his life, depending what his work is. And might make him exercise a bit of self control in future.

It will depend on the individual. If they have had no brushes with the law up to this point it could be a shock to be on the receiving end of a caution, and they may have a rethink about anger management issues and their attitude to others. But if they are in trouble all the time they will see this as no punishment.

"Ady sent the footage of the incident to the police and was later told the driver had admitted what he did, said he’d overreacted and expressed remorse. "
Swindon Advertiser.

Which is good. A willingness to admit a mistake, and change, is always a positive outcome.
Top

Jdsk wrote: ↑17 Sep 2021, 12:12pm Do we know what happened apart from that article? And especially the wording of the caution?

The victim is reportedly considering appealing against the police's decision.

I'd missed this with the much longer vid. IMO, It's much more useful than the edited version published by the BBC in the OP's item.
Top

That’s true, however in this case the actions have been reported in the National Press and the culprit got off too lightly with a caution for stupid and life threatening actions. To be honest and IMHO it was a no-brainier to accept a caution rather than go to Court. Remorse can be at least equally expressed in Court and considered as and when penalties are handed out. I believe that prosecution of the actions in Court is an appropriate and balanced response for the actions as reported.
Top

I'm many years out-of-date, but I think its right to say that a prosecution for its own sake is not in-line with government policies going back many years but with regular tweaks. AIUI, the caution here was a "simple caution" and unless there's been a more recent tweak, here's the current policy for simple cautions.

Incidentally, this case seems to me to show how this forum has changed over the years in that once upon a time, if a vid of any sort of incident came up in a thread, every turn of the pedals would be the subject of comment, often critical.

One change to the guidelines since "my day" is that most simple cautions can now be dealt with by custody officers - usually police sergeants - where once it was an inspector thing. This is probably something to do with the reduction in inspectors.

Anyway, in the absence of any further action, that's it in this case. If I've read the current rules right, then the only way the victim of the assault can take this forward is either by a complaint about police conduct or a private prosecution. The latter is expensive but crowd-funding is always a possibility. Skip the ads and watch this version of the vid and let's hear it from anybody prepared to pay up.

I would say that a complaint about police conduct here would result in a much more thorough review of all the evidence.
Top

Jdsk wrote: ↑17 Sep 2021, 12:12pm Do we know what happened apart from that article? And especially the wording of the caution?

The victim is reportedly considering appealing against the police's decision. (My emphasis)

It's my impression that most of those comments are based on what's been reported rather than actually watching the vid - perhaps because that Swindon Advertiser link means either first completing a bogus survey about smoking or waiting ages for it to disappear. In the apparent absence of independent witlesses (pace Ivor Tintging) the vid is the next best thing. There's another version on youtube although it's unfortunately without the sound which, on the Swindon Advertiser version is mainly the tyre noise from the bike carrying the camera: I can't hear any horn blowing and little (unintelligible) shouting. It's worth mentioning that the vid is from a rear-mounted camera so it obviously shows nothing of the road ahead.

I'm not clear why this escalated into something which might have resulted in serious injury or worse. I've printed some of the significant moments reproduced below, from this youtube version https://www.youtube.com/watch?v=KCjzH9z6dHA

There's a section at the beginning where we see an apparently uneventful several seconds showing part of a group of riders riding normally. There's a glimpse of following traffic but nothing significant and in particular, none of the riders appears to react to anything happening behind. What I take to be THE car overtakes on the other side of the centre line 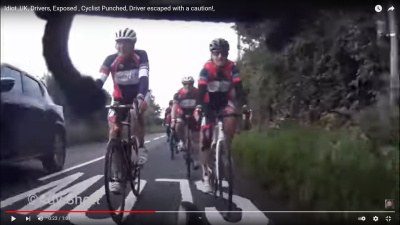 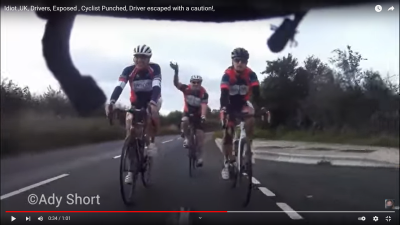 I presume that the car had been held up and was eventually caught by the riders who all begin to overtake it. One rider interacts with the car driver who raises a single-fingered salute 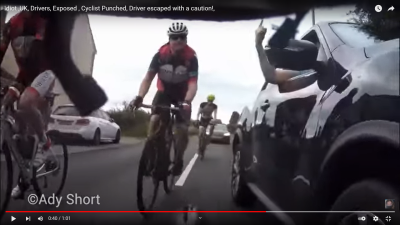 A rider takes hold of the door mirror briefly 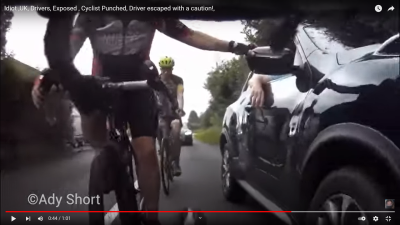 The rider moves away, then takes hold again when the driver appears to try to dislodge the rider's hand then strikes him, causing him to fall as seen in earlier posts. 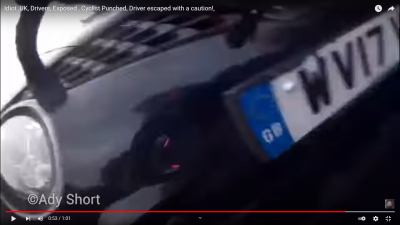 I'll stress that the screenshots were spread over some time, not rapidfire as may appear from the way I have presented them
Top

I think the driver is pointing with his index finger, not saluting with another digit, and my impression on viewing the footage several times was that the 4th rider's wave was directed forwards towards the driver but otherwise I think that's a summary of the footage I agree with.
Top

As in reinforcing a telling off of the rider?
Top

Setting aside the confrontation, am I alone in thinking that holding a wing mirror (or any other part of a moving vehicle) while riding a bike is a dangerous and incredibly stupid thing to do?
Top

As in reinforcing a telling off of the rider?

I've no idea, but I don't issue 'salutes' with an index finger, it's just bad form and could lead to all sorts of directional confusion

slowster wrote: ↑24 Sep 2021, 4:44pm Setting aside the confrontation, am I alone in thinking that holding a wing mirror (or any other part of a moving vehicle) while riding a bike is a dangerous and incredibly stupid thing to do?

I'd go with unwise, especially in the circumstances.
Top

The HC has this:

However, the relevant legislation is more specific:-


26 Holding or getting on to vehicle in order to be towed or carried.