I have a question, what does everyone think is a reasonable maximum speed on a shared path for pedestrians and cyclists?

Walking 4mph, jogging 6mph I would have thought
Please do not use this post in Cycle magazine
Top

I have one I can get up to 28mph on my trike, OK it's down hill and I can see at least 150 yard in front, most of the time around 8-12mph and if I see anyone I slow right down to walking speed
Alias Numbnuts
Top

Hi,
However slow you go there is always one who thinks you are too fast or have bad manners.

Any speed that's safe for other users is OK.
NA Thinks Just End 2 End Return + Bivvy
You'll Still Find Me At The Top Of A Hill
Please forgive the poor Grammar I blame it on my mobile and phat thinkers.
Top

It depends on too many factors to say, really. How wide it is, how busy it is, what's the surface (ie, how easy is it to brake on when necessary) are there concealed entrances to it....
Top

The speed of bike can be defined as "R".

Hitchhiker's Guide to the Galaxy wrote: "R is a velocity measure, defined as a reasonable speed of travel that is consistent with health, mental wellbeing, and not being more than, say, five minutes late. It is therefore clearly an almost infinitely variable figure according to circumstances, since the first two factors vary not only with speed taken as an absolute, but also with awareness of the third factor. Unless handled with tranquility, this equation can result in considerable stress, ulcers, and even death."

Walk along the path yourself, and note the speed at which passing cyclists make you feel like you have to hug the edge of the path in a perfectly straight line for fear of being flattened from behind. Go slower than that. This may require you to slow all the way down to walking speed on narrow paths.
https://mrevil.asvachin.eu/cycling/FF-303/
Top

There can be no maximum speed. At their best and quietest they can be no different to single-track roads. At their worst or busiest, dismounting may be necessary. Bear in mind that pedestrians walking towards you can see you coming. If they have clearly noticed you, it might be possible to pass reasonably quickly if there is enough space to not pass closely. Those walking away can not and may be surprised by even a relatively wide pass at speed. I would not pass somebody from behind at much more than walking pace unless the path was unusually wide and it was possible to pass at a great distance.
Top

Flinders wrote:It depends on too many factors to say, really. How wide it is, how busy it is, what's the surface (ie, how easy is it to brake on when necessary) are there concealed entrances to it....

I was toiling uphill on Cycle Track at a few mph when a pedestrian emerged from the bushes right in front of me. Vigorous avoiding action needed. Concealed access can be almost anywhere.
Top

20mph but keep your wits about you and slow for hazards (including wandering walkers), which cycle track design really ought to minimise where possible. See attachment for the sort of cycle track I'm talking about there, but at 20mph, I want 20 metres clear space ahead and about 2.5m to each side.

Adnepos wrote:I was toiling uphill on Cycle Track at a few mph when a pedestrian emerged from the bushes right in front of me. Vigorous avoiding action needed. Concealed access can be almost anywhere.

Keep clear of the edges! It's similar on roads: even if there's no visible gap in the hedge, a deer may still emerge from it (and it has to me). I've also had rabbits leap from the verge and seen a fox run out and drop a dead chicken in front of another rider - no crashes from such things yet, though!

I sometimes wonder about writing up some tips about cycling on cycle tracks as there are a few situations which I handle differently to on carriageways... and some I handle the same, such as junctions and driveways where I basically don't trust emerging traffic any more than I must, even if I have priority, which many riders seem to handle differently and some suffer as a result. 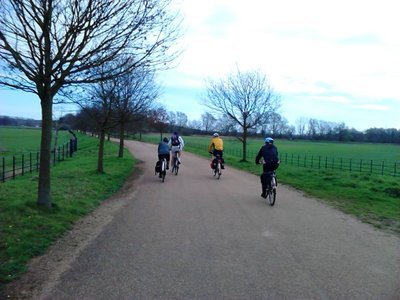 I'm talking about this sort of cycle track...

The maximum cycling speed on a shared use path should be the maximum safe speed. What that safe speed is will depend on circumstances. How far ahead can you see to be clear? Are there side entrances that other people might emerge from? How grippy is the surface if you need to slow down? I know of sections of track where 20mph would sometimes be safe if you had the track to yourself. And I know of other sections where 10mph would be about the limit even when there are not many people about. And circumstances can mean reducing your speed right down to zero.
Top

It depends greatly upon conditions.

In general? 15 mph or thereabouts. On a wide, empty path with good all around visibility (i.e. not a 2 metre wide track trhough the woods), faster is fine, as long as one slows down when there are others about.

In the presence of significant numbers of pedestrians, blind bends, and/or a risk of small children, dogs, etc. getting tangled in the wheels, much slower is necessary; no faster than walking / jogging pace.
“In some ways, it is easier to be a dissident, for then one is without responsibility.”
― Nelson Mandela, Long Walk to Freedom
Top

simonthepostie wrote:I have a question, what does everyone think is a reasonable maximum speed on a shared path for pedestrians and cyclists?

On shared roads for pedestrians, cyclists, motor traffic and other users (e.g. rural lanes) the legal maximum is often 60mph, or since dangerous driving is illegal the highest safe speed if that is lower (which it often is). Given that a 'path' where cycles can be ridden as of right is really a kind of road, ISTM the same applies.

We can ride as fast as is safe, and have exactly the same duty of care towards pedestrians that both we and motorists have towards them on general-purpose roads. I certainly see no support for the argument that pedestrians have any higher level of priority in relation to cyclists on a 'path' than they do on any other road, or that a cyclist on a 'path' is expected to show a higher level of care for, or deference towards, pedestrians than a driver should on a road. Similarly a pedestrian's rights to wander about without looking are exactly the same in both settings.

On roads or bridleways which date back to the era of the horse-drawn cart, historic features will often mean that motor traffic has to travel at relatively low speeds for safety, and the same may sometimes apply to cyclists. However I think there should be a policy that any newly-built or created 'shared path' should normally be designed so as to permit cyclists to safely maintain at least 15mph (preferably 20mph,and more in downhill sections) under normal traffic conditions, unless the path is to be specially designated as a low-speed leisure route and not treated as part of any transport network. Any route where in practice safety would often require cyclists to be riding at little above walking pace should not be being called a cycle route.
Top

That only applies to motorised vehicles. Of course, doing that speed on most cycle tracks designed for 20mph would be classed as furious/dangerous cycling anyway.

Apart from that that, I agree with much of that post.
MJR, mostly pedalling 3-speed roadsters. KL+West Norfolk BUG incl social easy rides http://www.klwnbug.co.uk
All the above is CC-By-SA and no other implied copyright license to Cycle magazine.
Top
Post Reply
62 posts