After our campaign (steady rider and me) 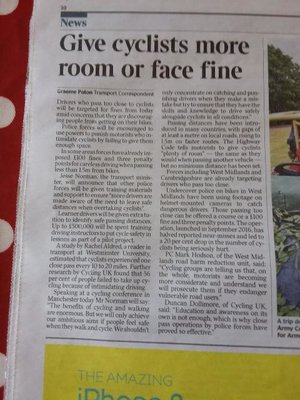 to get a close passing law onto the statute book and the wimpish unhelpful reaction of Cycling UK, looks what happening! You couldnt make it up…

Al
Last edited by Graham on 29 Jun 2018, 8:32am, edited 1 time in total.
Reason: Title
Touring on a bicycle is a great way to explore and appreciate the countryside and towns you pass through. Make a difference...
Top

At least twice previously, we've had something similar about close overtaking of cyclists and after a faint buzz of publicity it was back to normal.

The only surprise is the number of people who are taken in by this type of spin.
Top

You couldnt make it up…

You could & journalists often do (whether deliberately or not) ...

or at least give partial quotes that don't convey the same meaning as the person meant.

I also doubt that this was the entirety of what he said to the journalist and we don't know either exactly what was asked, possibly a leading question to get a particular response.
Top

al_yrpal wrote:After our campaign (steady rider and me) to get a close passing law onto the statute book and the wimpish unhelpful reaction of Cycling UK, looks what happening! You couldnt make it up…

The 2016 Motion called for a legal minimum passing clearance. Our Trutees responded to the Motion with the following:

CTC Council disagrees with this motion. Council agrees that close overtaking should be tackled. It’s hazardous for cyclists and extremely intimidating. However, Council remains reluctant to specify a ‘headline’ overtaking distance because (for example) even 1.5m may not be enough in some circumstances and we don’t want to risk giving drivers the impression that it is.

The Highway Code (rather than the law) is better placed to explain optimum overtaking distances because it could state a standard minimum distance, and explain the circumstances in which more space is needed, e.g. on fast roads, in bad weather, etc. When the next revision is announced, we will campaign for various amendments, including clearer advice to drivers on overtaking.

The Members backed the Trustees position.

The current Cycling UK position remains that close overtaking should be tackled and that the police should use their existing powers to deal with the issue. Cycling UK have welcomed the approach taken by the West Midlands Police and continue to encourage other forces to follow suit. Cycling UK campaign for various amendments to the Highway Code at its next revision.

There is no legal minimum passing clearance, the article reflects Cycling UK's stance of campaigning to get current laws enforced.

You appear to be suggesting that this has nothing to do with the lobbying work of Cycling UK, I think you may be making it up.

Maybe the title could be how to turn a positive story negative, you couldn't make it up.
Top

That's not happening though, is it? Seems like it's better guidance on interpretation of the law as it stands, better enforcement and education of drivers. Which is the correct approach imo. Time will tell how effective this is though.
Top

The point that many of us made at the time was entirely consistent: that the issue is one of willingness to prosecute, not ability to do so; that close passing can be prosecuted with existing legislation and that a distance-based law is not only unnecessary but poses a number of risks, which include a lesser ability to prosecute.
Top

Looking at this from another angle, it's now quite some time since a couple of keen traffic officers in the WMP set up their close pass initiative. IIRC, one of the suggested barriers to this being extended nationally was a shortage of money for individual police forces to buy close passing mats. That was resolved by some very generous people who crowd-funded £15,000 to buy every police force its own mat. To their credit, the WMP traffic officers have persisted with this - as well as introducing a system for gathering and using video evidence captured by members of the public - although this was dismissed by some on here. The results in terms of improved cycling conditions are unclear.

A ComRes survey of 2,039 British adults revealed that 52% weren’t aware that the Highway Code recommendation is to give cyclists at least as much space as you would a car when overtaking.

Not exactly a ringing endorsement of the result of the close pass initiative.
Top

1 metre in urban 30mph areas and 1.5 metres elsewhere like the French demand. Until there is a 'must' law and all drivers are made aware of it and abide by it cylists will continue to be injured or die in significant numbers. Top marks to the Police forces taking this seriously. Nul points for Cycling UKs Chairman for using lazy proxy votes in the pretence of democracy to block a common sense cycle safety motion.

al_yrpal wrote:1 metre in urban 30mph areas and 1.5 metres elsewhere like the French demand. Until there is a 'must' law and all drivers are made aware of it and abide by it cylists will continue to be injured or die in significant numbers.

Which police forces are campaigning for this to be made law? I'm certainly not aware of any, can you provide links?

al_yrpal wrote:Top marks to the Police forces taking this seriously.

As far as I can see you are suggesting top marks to the police forces who are enforcing existing traffic laws in a bid to keep cyclists safe on UK roads, which is the Trustees' position. I don't understand your continuing criticism of the Trustees on the matter.
Top

A feature on PM on R4 this evening too.
Top

I love the phrase "common sense". It tells you everything you need to know about someone's argument

al_yrpal wrote:After our campaign (steady rider and me) rps20180629_081850_495.jpgto get a close passing law onto the statute book and the wimpish unhelpful reaction of Cycling UK, looks what happening! You couldnt make it up…

Where was the article published?
Entertainer, juvenile, curmudgeon, PoB, 30120
Cycling-of course, but it is far better on a Gillott
We love safety cameras, we hate bullies
Top

The 2016 motion suggested specific legal minimum passing distances related to speed. The Highway Code does not specify minimum passing clearances so a lot of room exists for opinions. If set in legislation all drivers would soon become aware and it would have had an effect within a short time. If passed at the AGM it would have provided the base for detailed discussions with the DfT and discussions on changes to the HC. The police are willing to use mats with 1.5m to get there message across but Cycling UK Trustees failed to support the motion. I think they should have supported the motion and tried to take it forward. Cycling UK/Police/DfT may have arrived at precise wording suitable for legislation, Highway Code details and police guidance. Other people see it different and reply on legal points.
Top
Post Reply
120 posts