Yesterday I noticed new markings on one arm of the Saville Road-Stoke Hill traffic light junction in Bristol. Presumably done within about the last week as I pass there fairly frequently. Previously there were a cycle box, cycle line and stop line, certainly present in 2018 on the Google Earth satellite view, although the 2019 street view shows them all absent. I do not lament the absence of the cycle box, but the cycle lane was useful, if used carefully, and the absence of the stop line is puzzling. Presumably the rule about assuming a stop line between the light posts in the absence of other markings applies.

There may be more sensor lines cut across the road than before.

Does anyone recognise these markings and their purpose? Are they the latest innovative idea or has the council just sent out a crew with speed camera timing marking drawings in mistake for stop line markings?

The work appeared to be finished. The paint is dry and did not change between morning and evening. 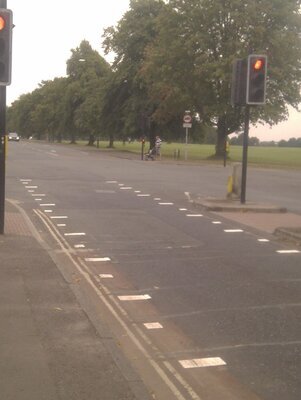 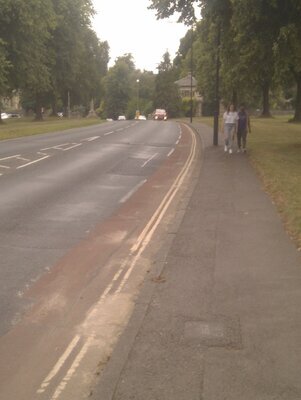 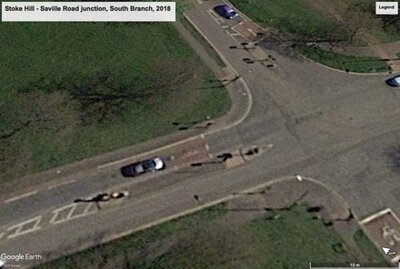 I noticed these a week or two ago. There is a camera there so I presume they are simply that: speed measurement markings (also functioning as a "brake sharply now" indicator). I presume the stop line is meant to be painted in as well, some time soon...
Top

My guess would be a traffic-light enforcement camera.
Top

That's been there for years. These markings seem to be new. Perhaps the camera's had speed capabilities activated recently.
Top

Perhaps it's to record RLJing and the speed at which it is done?
Top

Well, yes. That much is pretty clear.
Top

Bmblbzzz wrote:Well, yes. That much is pretty clear.

It's not clear to me. Another possibility is that the traffic lights are for the chop.
Top

I must confess to either never having noticed the camera, or having forgotten about it. I do not think I have seen speed camera markings lying across a stop line before. The general effect is of some sort of extension of that branch into the junction.

There may be some sort of rule about not superimposing two different road markings, for example, the way cycle lanes always stop where a bus stop is marked. The light controlled pedestrian crossing markings also appear to be suppressed. In fact the stop line has now moved legally forward to the line between the physical lights, whereas before if was further back, to allow for the pedestrian crossing, and the cycle box. In principle the crossing can now be legally blocked by unobservant drivers.
Top

wjhall wrote:In principle the crossing can now be legally blocked by unobservant drivers.

When was a driver last penalised (by the police or courts - not by a blind person beating hell out of their obstructive vehicle with their cane) for blocking a crossing when the lights changed?
MJR, mostly pedalling 3-speed roadsters. KL+West Norfolk BUG incl social easy rides http://www.klwnbug.co.uk
All the above is CC-By-SA and no other implied copyright license to Cycle magazine.
Top

I hope that somebody perhaps local knows or can find out and will post in due course.

Another Utopian possibility is that the ASL will eventually be re-instated and the camera will verify at what point a vehicle crossed the first stop line and ended up in the cyclists' waiting area.
Top

Bmblbzzz wrote:Well, yes. That much is pretty clear.

It's not clear to me. Another possibility is that the traffic lights are for the chop.

Possibly, but then there would probably be roadworks activity on all four arms of the junction. And the camera would presumably be removed.
Top
Post Reply
11 posts • Page 1 of 1