hamster wrote:It's early days but frankly I think drivers are a bit more courteous than a couple of years ago. Yes, there are plenty of impatient idiots out there, but nevertheless...

Interestingly it seems to be the over 55's who are worst. Young lads in hopped-up hatchbacks always seem to give me plenty of space.

Maybe the
younger drivers have been mountain biking in their youth, or are more aware of cycling due to the likes of Cavendish and Wiggins. The over 55s is the age bracket where when they were young they got into the mind set that, 'only failures cycled on the roads' (at any rate, according to a certain type of person I have seen commenting on various forums).
Top

Running a little late on the commute today when a car passed me. It was not a close pass but I recognised the car as belonging to Mad Dog Lady.

Mad Dog Lady is a woman who takes her three dogs for walkies along a shared use Sustrans path that I was heading towards. I knew she would get there first.

She insists upon leaving the dogs off the lead. In previous encounters she has told me that "they don't like cyclists" (they certainly don't like me and the feeling is mutual) and "I can't control them" (which she has often demonstrated to be the case). I don't enjoy our encounters.

Today she saw me approaching, took control of the dogs before I was near and I was able to say "thank you very much" as I rode by unmolested

.
There'll be tarmac over, the white cliffs of Dover ...
Top

It was a glorious weather today and I took the long way home.

Along with my partner in crime, Clare, we did our first 50 miler of the year on the tandem (Two Mills CTC Early Season Challenge).

Did my first 30+ mile ride since my kneecap split in two last year. A bit painful at times (note to self: don't chase roadies up hills), more than a bit tired but very content now.

Got hit by my first big bee of the year, and swallowed my first fly of the year....Summer's here (oh, is that the forecast for tomorrow...maybe not)
BNB Community Cycling
Top

Did my first 30+ mile ride since my kneecap split in two last year. A bit painful at times (note to self: don't chase roadies up hills), more than a bit tired but very content now.

Got hit by my first big bee of the year, and swallowed my first fly of the year....Summer's here (oh, is that the forecast for tomorrow...maybe not)

Nice one, I also did a 30 miler today. Gorgeous day, probably the warmest of the year so far.
http://keepcalmandcycle.blogspot.co.uk/
Top

Fed up with the dearth of decent cycle mags on the shelves (CTC magazine the exception of course), I've recently taken out a subscription to Aktiv Radfahren of Germany. A nice, broad magazine generally happy to report on a culture where cycling seems to be a way of life rather than a platform for full on fitness gains.

My limited, but acceptable German is admittedly being pushed to the limits, but importantly is being improved or at least maintained.... It also gives me good memories of various visits to the country over the years.

A good call, if I say so myself!

Nice evening as I write this, time for a quick (i.e. short - not particularly fast) ride out.

(OP: Good idea for such a thread by the way)
Top

Lots of other people out riding in the sunshine too.
There'll be tarmac over, the white cliffs of Dover ...
Top

Today we did a promotion for a new women's cycling scheme in a deprived inner city area that was predominantly made up of ethnic minorities. We had quite an amazing response - I can't remember doing a promo when people were so keen to get involved!

One woman made the point that despite there being as many women as men in the area there was virtually nothing for them to do (apart from house work and looking after kids), and that many of them had dreamed about the freedom and enjoyment that cycling might bring but had no idea how to get into it and no access to bikes.

It reminded me a little of this country in the latter half of the 19th century where cycling did it's own little bit to help emancipate women.

Yesterday, in another part of the city, we did a Ditch the Stabilisers session (well, three actually) and had lots of very happy children and parents at the end. A number of parents admitted that they'd been trying to get them to ride for ages with little success and then, after a short while with us (ably assisted by the wonderful Rachel from Sustrans) they were off and riding. It rained on them, it hailed on them....they didn't care they were just having so much fun!
BNB Community Cycling
Top

Just back from riding the Grand Canyon Rim - what a view! 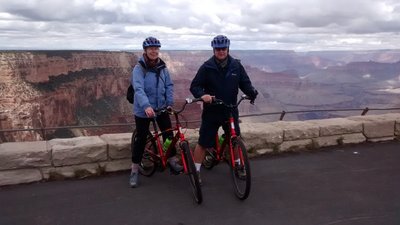 Spent the day on my allotment. Dozens and dozens of cyclists cycling past, more than ever. Dads out with toddlers on bikes too. It gets more popular every year! 'On yer bike' next weekend…

Wonderful commute in this morning.

Spring at last - miracle of carbon fibre technology beneath me, glorious sunshine, just a smidgeon of frost on the grass, lambs in the fields, makes me glad to be alive.
Top

Cycling through Derbyshire lanes on a beautiful spring morning, it's a Tuesday and I no longer have to go to work!
Saw, for me, the first swifts of the year, and many, many bluebells.
Top

I went to visit my Dad & went rummaging around in his very cluttered garage. Buried under a ladder & various other things, I found a bicycle! And it was my size!

It was a 1970ish store brand, but they were built by Puch in Austria, so I had a bit of a play, took a lame gel saddle cover off, adjusted the brakes and saddle, pumped up the tyres, and off we went....

There was still air in the tyres the next day, so I took a little longer ride. A couple of spokes were tinkling by the time I got back, but everything worked the way it was supposed to. And it was a beautiful day.

“In some ways, it is easier to be a dissident, for then one is without responsibility.”
― Nelson Mandela, Long Walk to Freedom
Top
Post Reply
836 posts