We're nearing the end of the year.

What was your most enjoyable ride of 2016?

A tour on the isle of Mull. Wet but a good few days,
Top

The "Flat and Fast" Sportive .... fantastic bunch of girls that thought my accent was "lovely" and when they realised the old guy could do his time at the front of the group stopped laughing, It was a great 100 miles ... it was flat ... not really that fast though ... great day out with people i had never met and probably will never meet again ... unless their at next years F&F ...
The pie and peas at the finish, nectar, Yorkshire caviar.
Jules was waiting for me and still chats to two of the girls on Faceberk ...
The Road Goes On Forever
Top

Mine was the ascent to Vetriolo Terme in the Dolomites with my three boys, it's about 900m climb I think.

I kept on telling my 11yo to take it easy as I feared he'd blow up trying to keep up with his older brothers.

It became apparent by half way I couldn't hold his wheel any longer. We met up at the summit.

The road around the Great Orme in Llandudno.

It is only a four mile ride but the scenery in wonderful.
Top

I don't usually go in for mass participation events but in April I did the http://www.etapelochness.com/. My one and only 'sportive'.

Thoroughly enjoyed it and for some inexplicable reason my average speed jumped from around 14mph upto 17.5mph!! I haven't managed to attain similar over any distance since. Must be purely psychological.

Nice ride anyhow, whether in a group or solo,

Picked blackberries on the way back. apple and blackberry crumble later that evening.
2020 : To redundancy ... and beyond!
Top

The last decent ride of the year in May before I was struck down by a kidney stone..... 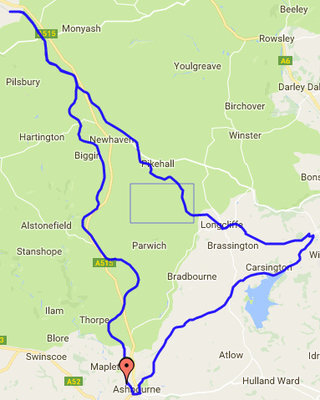 A slow, cold, evening ride around the less travelled parts of Digbeth and Nechells in Birmingham.....very much run down, deprived areas, lots of drugs and a fair bit of crime.

We started a 'Ride Active' class on Wednesday evenings in the summer, to get either new people riding or lapsed cyclists back into it. Our thoughts were that it would peter out once the weather turned and it got dark.

I remember one particular evening - probably in November - raining during the day, freezing cold at night, we waited at the meeting place ready to hand out bikes expecting no one to turn up....ended up being about 18 of us! All these people who'd never thought they'd be able to ride a bike, out in the dark in dodgy bits of inner-city Birmingham; a sight to behold with all the LEDs flashing away, much laughter and fun despite the weather, and lots of people on the pavements cheering us on and no motorists getting upset by having to wait for this 7mph convey to slowly wend it's way down the road. And every Wednesday they still keep on coming!

Just goes to show, you don't have to ride miles and miles or find exotic scenery - the joy of cycling can be had in the most incongruous places by sharing it with others.
BNB Community Cycling
Top 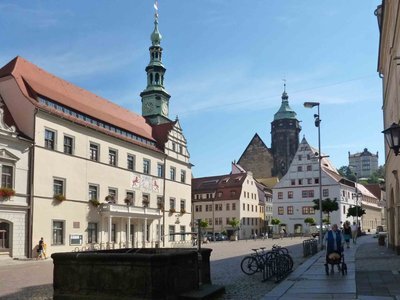 Tour up the Elbe ( bikes and accommodation c/o Augustus Tours). 180 or so miles of practically no traffic and varied scenery from flat and wooded (Beaver's Realm) to an impressive gorge as we approached the Czech border . 2 days were a bit short on the cycling but as we were staying those nights in Meissen and Dresden there was plenty to see. It was hot enough that cool art galleries were especially appreciated.
The picture is Pirna in the direction of which half the population of Dresden seemed to be cycling on a Sunday morning.
Last edited by PRL on 15 Dec 2016, 8:32pm, edited 1 time in total.
Top

Commute last night... moon was low and a gorgeous deep yellow - also in front of me for almost the whole route....

A few thin wisps of cloud to set it off, and as it rose (commute is a little under an hour) and shrank (illusion, I know) it kept me interested all the way.
A shortcut has to be a challenge, otherwise it would just be the way. No situation is so dire that panic cannot make it worse.
There are two kinds of people in this world: those can extrapolate from incomplete data.
Top

(click to enlarge)
Silverdale - RSPB Leighton Moss cafe.
My longest ride of this year.
There's no such thing as a tailwind.
It's either a headwind, or you're going well.
Top

I should coco.
Top

It was a long day in the saddle, it was hot, the roads closed to other traffic and I rode the last hour with a grin on my face. Being part of a 5000 strong peleton sweeping down the Oetztal, great scenery then descending at speeds close to 100kph. I'd been prepared for some walking but I managed to drag myself up even the 17% stretch on the Timmelsjoch after 200km and nearly 12 hours riding whilst others around did succumb to Shanksies was, for me, a major achievement.

Oh there have been other great days during the year - a few days later riding over the Groß Glöckner, setting a new PB for the Spreewald Radmarathon in April, the Eddy Merckx Classic near Salzburg in September and many more sometimes quick blasts on the local lanes that brought a grin to my face. But that day in August was the one that gave me the greatest pleasure, sense of achievement - oh I was tired afterwards but we'll happy!
Convention? what's that then?
Airnimal Chameleon touring, Orbit Pro hack, Orbit Photon audax, Focus Mares AX tour, Peugeot Carbon sportive, Owen Blower vintage race - all running Tulio's finest!
Top
Post Reply
24 posts