mumbojumbo wrote: compelled to take a test similar to drivers eg what do you do if you meet a cow on the road ?

I always stop and milk it.

Make quite sure it is not a bull

(after Helms cartoon)
Entertainer, juvenile, curmudgeon, PoB, 30120
Cycling-of course, but it is far better on a Gillott
We love safety cameras, we hate bullies
Top

Is there any empirical research or study on cyclists RLJing? And does it occur more frequently in some places than others? (I don't mean where there are more red lights!)

I very rarely see cyclists do it though it annoys me when l see cyclists slip onto the pavement, ride across the pedestrian crossing then slip back onto the road.

Very occasionally l go through red lights at roadworks but only after vainly trying to make the sensor 'read me' and actually change to green. There is a single carriageway lights controlled bridge not far from me where if a car parks close to the bridge at one end no amount of flailing about will make make it change for a cyclist at the other. So you have to run the red.
Top

I post on motoring forums too. I have no axe to grind either way, although it has been asserted by a poster on here that I am 'pro car'. I prefer to think that I'm in an unusual situation in that I have a foot in both 'camps', as it were.

I do see ignorant comments about cyclists in other places, but I can't recall a time when such views have not been challenged by others and called out for what they are. As a result I do think that there are many fewer than previously.

I reflect on CyclingUK where sweeping generalisations are made pretty routinely about 'motons' and other terms, and where attempts to present another perspective provoke accusations such as being pro car, as above.

Both types of forum are populated by enthusiasts, so perhaps not representative, but being honest, cyclists get a much better rap on, say, Pistonheads, than motorists do on here.

Just my observation, who knows whether the OP was trolling or not, but they were chased off pdq. Sometimes alternative perspectives are the best gift one can have.
Top

cyclists get a much better rap on, say, Pistonheads, than motorists do on here.

Which is somewhat strange as most of us are motorists ourselves.

I dont think that anybody was objecting to the OP being a motorist, they were objecting to a certain subset of motorists with an attitude of condemning ALL cyclists loudly (in their own domain) for petty misdemeanors of the few. While blatantly ignoring the more serious faults of the majority of the group which they are implicitly representing.

If on the other hand they come here and condemn red light jumpers as a whole they would get very little disagreement.
Yma o Hyd
Top

cyclists get a much better rap on, say, Pistonheads, than motorists do on here.

Which is somewhat strange as most of us are motorists ourselves.

Indeed it is.
Top

Yes but I'm one of the 90% of drivers who think they are above average.
Top

Illusory superiority exists in every population of humans, it's well understood and well documented. That of course includes drivers. It might even include the odd cyclist.

Chaddy wrote:Does anybody know why cyclists are oblivious to red traffic lights. They just saunter through with a total disregard for public safety. As a motorist i thought the highway code was for all road users. I didn't realise cyclists were exemp.

All road users?? Many motorists are exempt from stopping at traffic lights too.

crazydave789 wrote:I only hope brexit reduces the number of audi and bmw drivers tearing up the roads with their faulty indicators

Rather reminiscent of the post starting the conversation, though with a touch of humour.

BMWs and Audis DO drive along not bothering to indicate, just stand at any roundabout for a short while and you will have the evidence. Though if you observe other makes of cars as well you will notice that indicators have dropped out of fashion with drivers of all makes of car.
The good point with this is that a good deal of those with indicators flashing actually do a different manouvere to that indicated, so those who dont bother are often a blessing in disguise.

This bothers me much more as a motorist than as a cyclist.
Yma o Hyd
Top

Indeed. I never, but never rely on other people's indicators!
Top 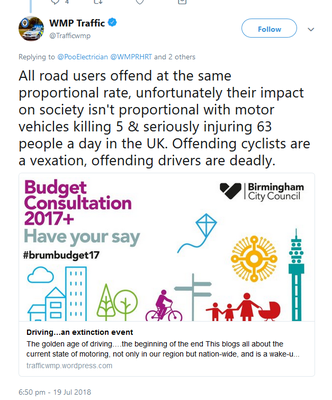 Indeed. Cyclists jumping red lights are usually just an irritation rather than a danger.

crazydave789 wrote:I only hope brexit reduces the number of audi and bmw drivers tearing up the roads with their faulty indicators

german cars will become rare in NewK, tariffs will make them very expensive, they will be replaced by ford "anglias"

wmp asserts that all road users offend at the same rate, really?
how many traffic offences do PoFs commit?
Entertainer, juvenile, curmudgeon, PoB, 30120
Cycling-of course, but it is far better on a Gillott
We love safety cameras, we hate bullies
Top
Post Reply
234 posts