I was cycling at 0630 on the morning of Friday 15th November along the Cambridge Guided Busway cyclepath from Impington to Cambridge North Station. (I have recently started this commute with a new job in Stevenage).

It was dark, cloudy and drizzling slightly, but I have a full light set on my bike. My cycling is confident, but cautious with the conditions and context. For instance, I had carefully navigated the “tin tunnel” under the A14 bridgeworks that morning which requires good front lights. I was doing a reasonable ~12mph at the time on a hybrid bike. I was not under the influence of drugs or alcohol (I had not had any drinks the previous night).

In short, I was cycling on a “shared use” cyclepath on my way to work: a normal thing for people to do.

However, on the final approach to the station I collided with a grey metal pole set into the cyclepath on the left about 100m before the station. It was completely invisible in my front lights, dipped slightly so as not to dazzle oncoming traffic. It is all backlit by the bright station lights. There was no time to take evasive action as it loomed up in the final split second.

This was a completely traumatic event. A head-on collision. I remained upright on my bike completely stunned. My bike helmet probably saved me from a head injury. The pole had struck my handlebars and my left shoulder carried the full force of the impact into the pole.

I was in severe shock and pain and eventually limped by taxi to Addenbrookes A&E. There followed xrays and simple diagnosis of an extremely painful left broken collar bone from where I struck the pole. It is a displaced fracture (ends way out of alignment) taking many months to resolve with cycling and driving ruled out for now.

So basically, is putting dull grey thin metal poles in the middle of cycle paths really a very good idea? 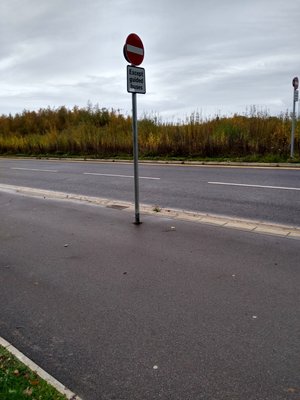 No entry to guided busway. Let's keep the poles away from bus wing mirrors. 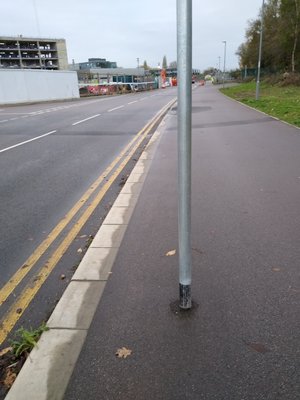 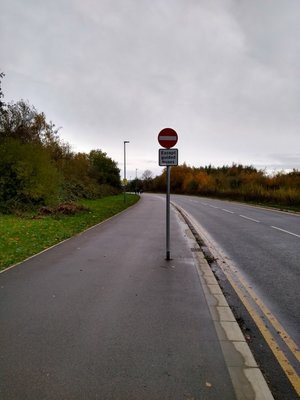 Nearest streetlights (dim) are miles away 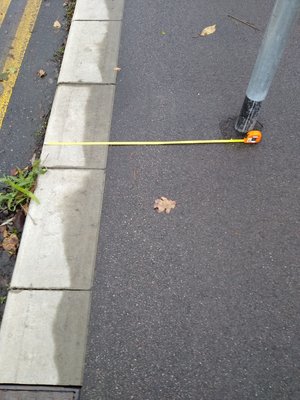 0.85m deep into cyclepath. No messing with this beast! 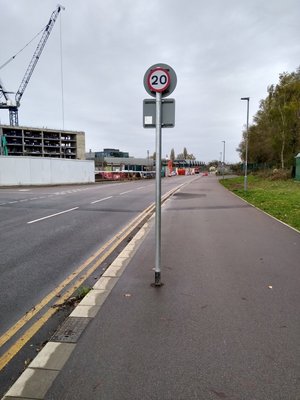 No white lines or reflective warning markers at bike level. One there for a ufo/drone maybe?

I'd consult an injury solicitor experienced with cycling, such as CUK's if you are a member. While you basically cycled into a pole, so there is an argument that you cycled into space that you could not see to be clear, I'm pretty sure that posts in cycleways like that should have reflective bands on - I think it may be in the Traffic Signs Manual - and I've persuaded Norfolk to move similar posts from new-built cycleways to the verge, so I suspect it's some sort of shared fault.

Also, I think other posts further west on the busway cycleway have painted diamonds around their bases to warn you not to cycle there, so someone at Cambs CC must think there's a danger worth warning about.

Government doesn't put such posts in motorways because it costs them too much (financially and politically). I wish they'd learn the lesson for cycleways too.

Please let us know how you get on. I'll let camcycle know.
MJR, mostly pedalling 3-speed roadsters. KL+West Norfolk BUG incl social easy rides http://www.klwnbug.co.uk
All the above is CC-By-SA and no other implied copyright license to Cycle magazine.
Top

mjr wrote:…
I'm pretty sure that posts in cycleways like that should have reflective bands on - I think it may be in the Traffic Signs Manual - and I've persuaded Norfolk to move similar posts from new-built cycleways to the verge, so I suspect it's some sort of shared fault.

I've never understood why it's acceptable to put posts in cycle ways when, as you say, They would never consider putting them in a road.

(Example: Colston Street, Bristol, going uphill; roadworks type signs, put carefully in the cycle lane so they don't block the footway or (the rest of) the roadway; requiring a cyclist to move out and round which absolutely infuriates Mr Toad following close behind).
Top

mjr wrote:Also, I think other posts further west on the busway cycleway have painted diamonds around their bases to warn you not to cycle there, so someone at Cambs CC must think there's a danger worth warning about.

Is the area to which the OP refers controlled by a different authority? Is that why there isn't a painted anything around the post they rode into?
Top

I think Cambs CC is the highway authority for both bits. Even if some highway powers are delegated to Cambridge City Council, Cambs will still be responsible for oversight and legally responsible.

brooksby wrote:I've never understood why it's acceptable to put posts in cycle ways when, as you say, They would never consider putting them in a road.

IMO, it's not, but it'll be easier to sue them for not even putting the usual excusing measures in than it will be to change the standards so excusing measures aren't allowed any more.
MJR, mostly pedalling 3-speed roadsters. KL+West Norfolk BUG incl social easy rides http://www.klwnbug.co.uk
All the above is CC-By-SA and no other implied copyright license to Cycle magazine.
Top

No doubt I'll cop flak from the cotton wool wrapped brigade here but the op needs to accept responsibility and take the blame here.
He/she crashed into a stationary object. The pole is set. It didn't jump out from it's position and start jumping around waiting for the first cyclist to come along to wallop.
Street furniture is everywhere. Quite a lot here in Bolton and likely other areas are being painted black so it looks nice and pretty even though this makes it all the more difficult to see, yet most people seem to be aware that it is there and know to look for and avoid it.
I'm not saying that sticking a big steel pole in the middle of a cycle lane isn't a stupid idea because it is (I see it frequently) and the UK has a long way to go in terms of lane planning and building and I can't deny walking into a pole whilst reading the paper when I was younger, but suing the council because you failed to notice said pole just isn't on.
Better lights and take more notice of your surroundings. Hope you heal well soon.
Bill

I fear Vantage is right, the pole should not have been there but it was
Getting compensation or help seems reasonable

Hope you recover soon
Entertainer, kidult, curmudgeon
Cycling-of course, but it is far better on a Gillott
We love safety cameras, we love life "597"
Top

Complete sympathies about this crash. IMHO Cambridgeshire CC or the relevant authority is negligent - no questions.

I was so appalled at Cranebridgeshire CC having no cycle design standards (Oxfordshire CC does) that I decided to write my own standard to try to goad them into producing a cycle design standard. I have presented this standard (it is called Non-STOP) to Cambridgeshire CC cycle team and have received an email acknowledgement that they have received this document. I have also had verbal feedback from cycle officers at Cambridgeshire CC that they could no have their own standard because then they would have to be compliant with this standard. This to me is acknowledgment that their own network is unsafe.

* There should be no upstand (pole, light column etc) on a Greenway ever
* Existing upstands (prior to removal) should have reflective bands and or straw bales

If you PM me then very happy to email my spec. and would be happy to meet and discuss this. I know Cranebridge well.
Top

I thought that there'd be a "you should have cycled at 4mph with million candlepower front lights pointing 45 degrees upwards" voice (as if from a 4 Yorkshireman Monty Python Sketch about riding unicycles over minefields)...
I'd point out the following
* this is a premium grade cyclepath between the a10 and the new cambridge north station; 1000 metres maybe
* this is the only pole set deep into the tarmac on this side of the path
* the paint is grey, non-reflecting and impossible to see until the last moment, in darkness and rain. A round surface mathematically gives a point, or linear reflection as a cylindrical prism (pole). Most of the illumination is back-scattered FYI.
* cycling along with lights which don't blind other users is responsible. as I say, I'd tackled the intricacies of the tin tunnel under the A14 which is predicated on having good lights.
* my behaviour was consummately reasonable. the same cannot be said of the traffic engineers, I'd argue.
Regards
D
Last edited by with2ells on 20 Nov 2019, 12:23pm, edited 2 times in total.
Top

Mmmm! 110% with Vantage in this one, it was a stationary pole!!! I got abuse recently for a similar response to a post re potholes. I’ve got every sympathy with anyone getting hurt by anything, but..... one response was, that cyclist shouldn’t have to keep looking at the road in front of them!! Why on earth not? Everyone’s quite happy to criticise motorists for the same failing.
Never attribute to malice that which is adequately explained by stupidity
Top

Sorry about your crash.

I don't know if it will help your case at all, but laws / design requirements in other countries such as the Netherlands, Denmark, and Norway limit where cycle path obstructions can be placed and require either lighting or reflective surfaces on such obstructions. If it helps, I'd be happy to provide a translated copy of the relevant sections of Norwegian guidelines for cycle path design.

For Vantage and the others saying the OP should accept the blame, would you be saying the same if it was a wire stretched across the path? How invisible does something have to be to make the difference between their fault & shockingly bad design practice?
“In some ways, it is easier to be a dissident, for then one is without responsibility.”
― Nelson Mandela, Long Walk to Freedom
Top

I hope you get somewhere, not just for your own sake, but also so that there's a precedent which others can point to when fighting similarly negligent installations.
cycle.travel - maps, journey-planner, route guides and city guides
Top

Stationary, but extremely hard to see in time without walking pace and antisocially aimed blinding bike lights. I see why people buy retina-burners now. Make other people's eyeballs start to smoke, but get to destination in one piece!
Top

Any civil case is tested on which of the two parties had the greatest substantive contributory negligence. Yes, I was cycling and not walking. Yes, I didn't have trillion candlepower front lights pointing up at 45 degrees. Doing those two things would have increased the probability of not colliding with the death pole. Silly me. If only I had done those two obvious things...
Top