To the roadie on the Bath-Bristol path this afternoon travelling at speed in the vicinity of Saltford, shouting at other cyclists to 'Keep Left! Keep Left!' . . .

. . . I really hope you had nothing to do with the child I encountered shortly after, in the direction from which you had come, limping, crying, and nursing a grazed elbow . . .
Top

Seems to be the norm on there. I once witnessed a young lad out cycling with his mum near Mangotsfield being knocked off by a twenty-something on a racing bike blatting along at silly speeds. The path is far too busy with walkers and families for any sort of speed.
Top

Used and enjoyed that path since its inception, back in the late '80s... the descending section between the Speedwell tunnel and Easton is now unpleasant. I get the deal - the gradient is gently & continuously downhill - see below. However, it's mixed use, from parents and toddlers, dog-walkers with their poorly-trained-pooches-on-elastic, pensioners on their way to get a cheap meal at Morrisons (I love their small brekkie, with toast & real butter...), as well as less savoury visitors, inc. a nasty group of teenagers responsible for a mini-crimewave a couple of years ago - I've even been shot at on that section (airgun obs.)! should mean that common sense dictates it's not a sensible place to try for your PB... however, standards of etiquette are not what they used to be - they even tried a mock zebra-crossing near Whitehall primary a few years ago to try to deal with the issue, which I viewed with very mixed feelings. 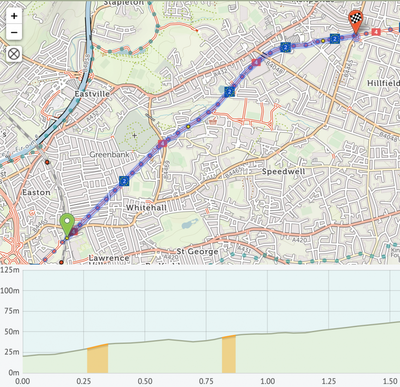 downhill section of the B2BCP...

The path is in a way a victim of its own success, but also and more importantly a victim of the failure of successive iterations of local authority in Bristol to make other places attractive for cycling.
Top

I'm always a bit dubious about mixed use paths - one of the reasons being cyclists who want to ride at a speed which IMO is too high for the conditions and the needs of other users.
I was riding on one such a couple of days ago - it's quite narrow - barely room to pass with two cyclists.
Part of it is on a slope - I was riding uphill and a young woman ( definitely not a "roadie") was coming down at speed shouting "watch out" - another near miss and I've experienced a few in these circumstances.
No wonder we get grief from walkers.
Top

recumbentpanda wrote:To the roadie on the Bath-Bristol path this afternoon travelling at speed in the vicinity of Saltford, shouting at other cyclists to 'Keep Left! Keep Left!' . . .

. . . I really hope you had nothing to do with the child I encountered shortly after, in the direction from which you had come, limping, crying, and nursing a grazed elbow . . .

I very much doubt it or it would be on the front page of the Bristol Post today.
Top

Can't remember the last time I rode the B2B path but do know in the past when I've got home and upoaded the rode to Strava I spent the next 30 minutes flagging all the segements along the path as hazardous. The downhill gradient from Morrisons to tempting but also too busy to speed on, I will get to Royate Hill bridge and then effectively roll down to Devon Road past the school crossing and even the I'll still trigger the slow down sign.
My Youtube library.
Top

I can't imagine what it'll be like when they eventually finish the Chocolate Factory project. There'll be 100-plus dwellings, with access that's proposed to give out directly onto the path. More swerving required, as the happy residents emerge on their clicky-clicky road bikes and super-silent e-scooters! Or will they all drive instead - I wonder?
I used to live in Easton, and was hoping that the flats would be ready sooner, so I could buy one, but ran out of patience & moved to Glos. cricket club instead. I live in a tent in the middle of the ground, which has its pluses - its very flat and nice & quiet, except on match days, when I have to up-sticks to one of the bars. obs - or used to. Since c19 it's all changed, of course... now the only time I have to move is when they want to mow the lawn!
Last edited by simonineaston on 26 Aug 2020, 1:50pm, edited 3 times in total.
byyeee,
SiE
Top

Speeding cyclists shouting “watch out” whilst not slowing down are akin to motorists pipping their horn at pedestrians crossing the road and not slowing down.
On the road, cyclists complain about motorists not giving enough space to cyclists. Cyclists should try and always give the courtesy and respect they want from others. On mixed use paths slow down, consider others. If a cyclist wants to speed along, then make sure it is done where it is safe.
I have seen similar incidents on the Trans Pennine Trail, cyclists “in the zone” bombing on seemingly without a care for anyone else. More often than not it is when they are travelling west to east, almost down hill all the way from the Pennines to the east coast.
We seem to be more and more a society of me first, me second and me last.
Top

Quite so. That action assumes a right of way, which is not the case. Additonally, it indicates an unwllingness to cooperate or see the world from another's point of view. Adrenaline and selfishness doesn't make a good mix on a public road and transferring it to a shared footpath / leisure environment doesn't improve things... what a shame.
byyeee,
SiE
Top

simonineaston wrote:transferring it to a shared footpath / leisure environment doesn't improve things... what a shame.

I think this is a problem with all such routes. Some want to use them as a leisure facility with the freedom to wander left and right with no care in the world, whereas another group want to use it as a means of going somewhere with rules such as keeping left etc.

I lived in Bristol when the original path was opened. At that time the surface was not good and I only tried it once or twice, the roads being more satisfactory - at least in those days (early 80s). These days I avoid such routes unless I am happy to avoid dog walkers, families spread out full width etc i.e those using them for leisure - and of course I do slow right down and call a cheery "good morning" etc.

I think this is a constant problem for Sustrans etc - are they putting together a leisure facility or a commuter route? Where I live now there is a case for a route between two towns. The logical (commuter route) would be straight along the main road, but all the Sustrans efforts have been towards a meandering lanes route.

These problems are not limited to the UK. 20 years ago, for a few years I lived in the USA. There was a 30 mile loop of reclaimed railway through/round part of the city. The same issues were present, but there was a 15mph speed limit - whether enforced or not I do not know.
Top

Quite so. That action assumes a right of way, which is not the case. Additonally, it indicates an unwllingness to cooperate or see the world from another's point of view. Adrenaline and selfishness doesn't make a good mix on a public road and transferring it to a shared footpath / leisure environment doesn't improve things... what a shame.

It might be adrenaline and selfishness, but I think that often it will be ignorance of how to ride (whether on a mixed use path, in the company of other cyclists, or on the road).

A couple of years ago I was riding uphill well over to the left on a 3m wide gravel mixed use path, and a large family group was riding downhill towards me. The family group was strung out, with a couple of adult males going somewhat recklessly fast at the front, and two women brought up the rear of the group 50m further back who were extremely cautiously dragging their brakes all the way down the hill. One of the riders in the middle of the group was a girl aged ~16 years old, who was on the same side of the path as me and coming directly towards me at speed. Instead of being in control of the bike and her speed, she was gripping the bars for dear life. When she saw me, she didn't brake and instead moved over to the other side of the path, only for the bike to slide out from underneath her as she hit a patch of loose gravel while turning the bars.

Like that family group, many cyclists who might be considered selfish or unsafe have probably simply never learned - and never been taught - how to ride a bike, and just don't know any better. What would probably make the biggest difference to improving the behaviour and the risks posed by such cyclists to themselves and others, is lots more people on bikes.

So called 'critical mass' of cycling will not just influence drivers, it will also influence cyclists. Once the density of cyclists on a path reaches a certain level, it forces riders to fit in and ride as part of the general flow. Inexperienced cyclists will benefit from this, because it gives them the opportunity to learn simply by being forced to copy what everyone else is doing.
Top

How can anyone be so ignorant as to not realise riding too fast on a mixed use path for safety is not right way to behave ?

I think writing off bad behaviour as being ignorant of the way to ride is treating them as infants without the understanding of right and wrong. Doing that kind of lets them out of being responsible for their own actions. If you're not responsible for your own actions then you're not fit to be there riding a bike without supervision.

IMHO it is simple. Riding too fast on mixed use paths is wrong. No excuse for the majority of those idiots who do it!
Top

No excuse for the majority of those idiots who do it!

But at the time, it's a done deal! There'll be a small group of sweaty, muscley * guys whizzz past at 20mph plus, gone in a trice, never to be seen again (well, not 'till next week-end, that is!), in a flash of carbon-fibre and wobbly lycra. Before the more steady-moving parties of the unfolding theatre have worked out they're there, they've gone!!
* Don't get me wrong - I'm not anti "sweaty muscley cyclists" per se - it's all about time & place.
byyeee,
SiE
Top

It happens but there's no excuse for it. It's within their control to stop that behaviour.
Top
Post Reply
27 posts