I've been doing some research over the last few weeks and am certain that there are thirty crossing over the river.

The Tamar forms the majority of the border between Cornwall and England, and I did all the bridges (or at least most of them) some years ago before I had GPS or thought about Google satellite images and online OS mapping, so decided to do it again, but properly this time.

Numbering the crossings from the north, I did 1 to 14 inclusive yesterday.
Drove up to a big layby just south of Kilkhampton and parked up, then set off for a 40mile ride. I've just about completed riding all the roads in Cornwall, so I took in a few of the last ones as well.

Here's a map of my route with the crossings numbered, and a complete list too. 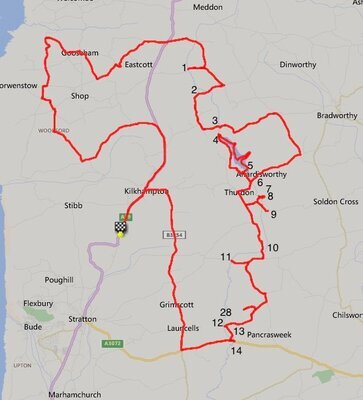 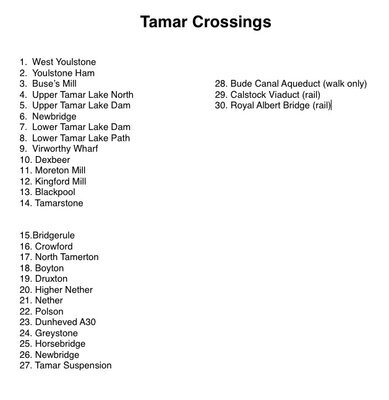 I tried to get to 28 Bude Canal Aqueduct but there's big signs up forbidding cycling and horse riding, plus there were walkers about so didn't want to flout the rules. When I realised it was a aqueduct, I aborted my walk. Initially, I thought it was a normal bridge but found a plaque telling all about the Bude Canal ............ aqueducts and railway bridges don't count for a cyclist wanting to ride over them!

When I've done all 27, I may drive up to the canal and walk it with Doggie. Meanwhile, Calstock Viaduct is easily done on the Gunnislake train, and it's only a matter of getting a return to Saltash to cross the Royal Albert Bridge.

Tamar Suspension Bridge (27) will have to wait until next year as the cycle/pedestrian part is closed and not do to be finished until April (I understand).

Next outing will be driving to Launceston to take in 15 - 21 for another 40mile ride. 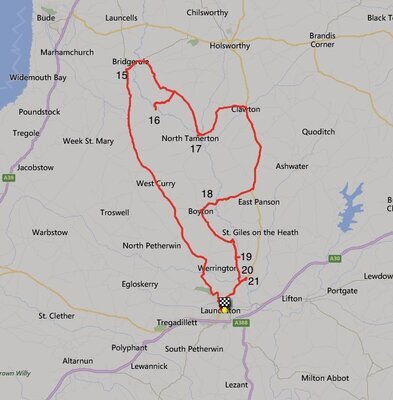 Do you get a badge or anything when you've crossed every bridge Mick F?
The River Penk starts near here and flows into the River Sow at Stafford, says on Wikipedia its 22 miles long but I've just looked at my OS map and there are 3 railway lines that cross it, both the M54 and the M6 motorways cross it and there is a bridge on the private estate of Somerford Hall as well.......so it's a none starter!
Bit disappointed really, I could have done it tomorrow.
Top 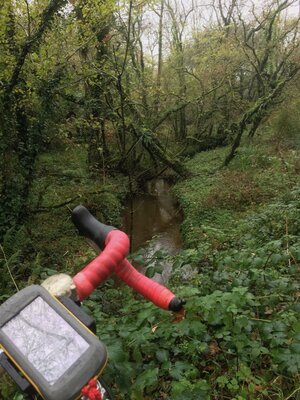 Are there any otters about on that river Mick F?
Top

Did you use the tree as a ski slope to ride across.

I like rides with a theme, even more so when you come up with the theme yourself rather than following someone else's (Though I'm happy to do both)
Top

Yes, a theme gets me spurred on to ride these days.

Otters?
I actually don't know. The river there is maybe 6ft wide at Crossing No 1.
Further down at Crossing No 3, it was more wide.
By the time you get to No 4, the river is wider and more full-flowing. Lots of streams coming in.
At the Gunnislake area Crossings 25 and 26 we have kingfishers and otters.

Crossing No 4
Upper Tamar Lake (North) Crossing No 4 cycle track and footpath right round the lake. 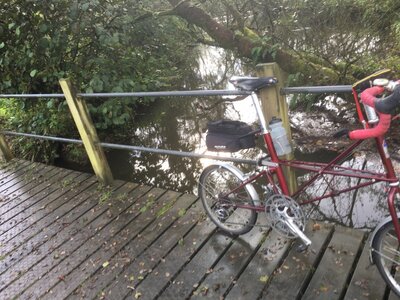 May the river be forded too? When did you last ride your Mercian?
Entertainer, juvenile, curmudgeon, PoB, 30120
Cycling-of course, but it is far better on a Gillott
We love safety cameras, we hate bullies
Top

What's wrong with it?
Don't you like red?
Are you one of those people who only like black bikes?

Yes, it is a great concept. I like a reason to cycle these days, so concepts work for me.
I think my days of "just going out for a ride" have gone now. I need a destination or a reason.

Cyril Haearn wrote:May the river be forded too? When did you last ride your Mercian?

There is only one ford and that's at Latchley not far from here.
Been down to it a few time over the years but it's only safe to cross when the river is low, and only then in an off-road vehicle.
Wading across in wellies may be ok, but cycling? No thanks!
https://www.geograph.org.uk/photo/2422888
https://www.google.co.uk/maps/place/Lat ... -4.2460521

Mercian?
Last ridden Oct 11th, though my mileages on both bikes are so well down this year that I suspect it'll be half what it was at the lowest recorded year since I got back to cycling in 2004.

1,231miles so far since the turn of the year. Pitiful really, but I am walking perhaps 20miles a week doing the dog-walking!
Mick F. Cornwall
Top

PS.
You can see the ford across the river to Lamerhooe. 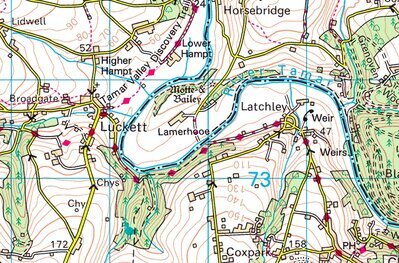 When does the challenge between Mick F and fossala take place, or have both entered the hill-climb at Streatley today?
Entertainer, juvenile, curmudgeon, PoB, 30120
Cycling-of course, but it is far better on a Gillott
We love safety cameras, we hate bullies
Top

Something about your Tamar-crossing project made me think of this! A version with twenty-inch wheels, please Mick