Page 8 of 9
by eileithyia
Mick only just caught up with this post, sorry about your accident and glad to see you are back on the road.
by Mick F
Thanks.

How's your shoulder?
by Mick F
Received a letter from the solicitors this morning.

Basically, Cornwall County Council have used the "Section 58 Defence". Sect 58 of the Highways Act refers to a duty of care and the inspection routine of the roads. They state that that stretch of highway is under a heightened scrutiny and they check it every month. In fact they checked it only 4 days before my accident and found no fault.

Consequently, the solicitors are dropping the claim.

I've emailed them to ask them not to. Here's what I've said (paraphrased)

I'm rather sad about your decision not to proceed with the case but I do fully understand your reasons. CCC have not breached their duty of care - but have they?

They knew full well about the spring, and also that the road had holed in the recent past, that's why it was on a monthly inspection routine, and they also knew well that the heavy rains we'd had at the end on July would have caused the hole to re-appear with a vengeance. They should have been out to the site immediately after the rains and at the very least they should erected warning signs. It seems strange to me, that they wait for a member of the public to report a problem before they do anything at all. A matter of hours after my accident, the hole had a patch - there seems to be no record in your enclosures from CCC mentioning the temporary patch being fitted that very afternoon. No doubt my Policeman reported the hole, and it was acted upon. The hole wasn't filled, according to the records, until 4th August. Strange.

The site is still a problem with the road still not properly repaired nearly 5 months later. Do they wait for another accident, or even a fatality before they do anything? My accident could very easily have resulted in my death or serious injury.

I think that CCC have come straight out with the Section 58 Defence in the hope that the claim would be dropped.

I request that you don't drop my claim without a struggle.

We'll see what happens next.
Wish me luck.
by patricktaylor
Good luck.

Who's paying for the struggle, and does it make any difference (to who pays) if you go against the solicitors' advice?
by Mick F
The CTC approved solicitors - Russel Jones and Walker - specialise in cycling claims and they also do a no-win-no-fee system.

They have dropped the claim, but have no objection to my getting a second opinion or employing a solicitor on a fee-pay basis.

I'll see how they reply to my email, and take it from there.
I have 3 years to act on my claim before it legally is null and void.

The damage to my bike wasn't terminal, and everything is fine now. I'm scarred on my thigh and my elbow (which still hurts from time-to-time) but other than that, I'm fine too.

Part of me wants to just drop the whole subject. It's easier that way.
by pigman
Mick
Im not surprised at CCC's response. As a defendant, its what we all might do. A number of years ago, I had an accident, got the excuses, but perservered and it paid off.
What I am surprised at is the solicitors response. They appear to be highly regarded on this forum, and as they act for CTC members have some 50k members interests at heart. Maybe its the wrong time of year to do some work, maybe your case isnt worth anything to them, I dunno. You make it seem like they just rolled over without talking to you. But dont give up. If you feel CCC arent playing fair, then up the anti yourself and start playing on the injuries aspect. Counter their unfair play with your unfair play till you get what you consider to be a just settlement.

It might be worth pointing them to this forum in a businesslike manner to let them know that their way of working (or not) reaches a wider audience than the phone line between you and them.
by GeoffL

Mick F wrote:We'll see what happens next.
Wish me luck.


I wish you luck!

Just in case you haven't seen section 58, here it is. However, I don't know whether that text has been subject to further amendment.

I'd say that their only defences under section 58 are 58(2)(e) - but only if there are signs warning of uneven road surface and/or floods, and 58(2)(d). IMO (but IANAL), the latter should be defeated if you can show they knew there was a high probability that potholing would occur after heavy rains. However, a court would need to decide whether the degree of knowledge was sufficient for the CCC to "reasonably be expected to know that the condition of the road was likely to cause danger to users of the highway".

Mick F wrote:They have dropped the claim, but have no objection to my getting a second opinion or employing a solicitor on a fee-pay basis.
I'll see how they reply to my email, and take it from there.
I have 3 years to act on my claim before it legally is null and void.

Firstly I'm not a lawyer so my opinions are just my opinions. I would be reluctant to employ a lawyer to pursue a case that Russell Jones had assessed as borderline as fees could mount up very quickly.

An alternative if you want to pursue it without significant financial risk is to use the small claims procedure to claim against the council yourself. A cyclist in Glasgow did this successfully for a pothole. I can't find the news report now unfortunately.

The big advantage of the small claims procedure (as I understand it) is that neither side can claim legal expenses from the other. So if the council choose to use hours of lawyers time defending a claim they will not get that money back. They might decide to pay at some point before the hearing. Worst case scenario you lose at court and are out of pocket for the court fees. I think you have a chance of winning. As you have said repeated repairs and monthly inspection suggests an underlying problem perhaps with drainage which they have ignored.

Worth a look are

Reading the forums on potholes.co.uk I saw an interesting suggestion. A Freedom of Information request to the council asking for info on inspections carried out on the road in question over the past year. How many were carried out. How they were carried out. If by vehicle at what speed. How many people in the vehicle. What faults were recorded.

An FOI request is free and should be answered within a month. It may or may not give useful info but is worth a go. For example it might show less than monthly inspections. It might show that "inspections" rarely identify any faults. And so on.

Also maybe worth asking for is complaints the council received about the road from 3rd parties just on the off chance the pothole was reported before your accident.

An FOI request can be made in any written form so for the time taken to compose an e-mail why not. Most councils have a FOI page on their website. I've made a request to my council and it got the fastest response I've ever had from them as there are legal time limits they need to comply with.
by Mick F
Just been chatting to the solicitors on the phone.

They're carrying on with my claim!

It just seems that some of the Council's disclosure information doesn't quite add up. also some stuff that was asked for hasn't been produced.

The solicitor would like more photographs from the scene to get a handle on the geography and the state of the stream and drainage systems. I'll get out there in the next few days.

No promises, and it will be a difficult claim, but all is not dead yet.
by Simon L6
Mick - that is pleasing.

by Mick F
One year down the line. Scars healed, Bike fine. I've till got the broken stuff and ripped clothes for evidence.

If the rain ceases a little, I'm going down the hill again for old times sake! See if my pot-hole has opened up again, we've had torrential rain these past few weeks - just like last year!

Anyway, nowt heard from the solicitors since I sent off some pictures of the scene to them in January. I may send an email this week to ask what's going on.

These things take time, I suppose.

by braz
Mick, I wonder if you 'just think' every time you descend the hill towards the bridge - it's bad enough trying to stop in a car sometimes when it's wet (and motorists coming the other way ignore the 'single lane priority' signs) - and as you say the weather recently has been less than good.

Howver - I though I might cheer you up becasue from where I'm sitting (still in front of a pile of tissues) and somewhat to the west of you, the wind has taken a very starnge direction this morning - it's coming from the North West, which is almost unheard of! It means that the rain has stopped, even a touch of ''blue' in the sky - so go get the M out quickly!

The Lawyers - will do little, or attach little priority, unless you harass them - politely, but regularly! Be proactive!

(why does this machine take some pictures and not others - I don't do nowt different!)

by braz
Sorry - clouded over - starting to rain.

That must have been summer.

by Mick F
Hi Braz. Thanks for that and get well soon!
I will be emailing the solicitors on Monday.

The weather cleared sufficiently, and I rode away for a good 40 miler. I climbed out of the valley and over to Callington, then down my hill and past my patches. The repairs seem to have held ok despite the recent downpours.

This is a shot of the dredging work that was done last winter: 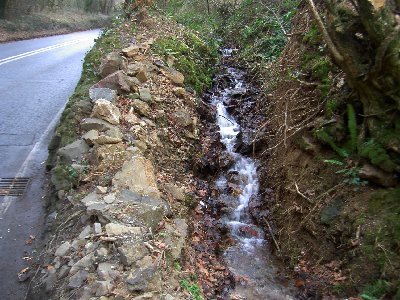 You can see the clean stones and the exposed roots.

This is a shot of the patchwork repairs: 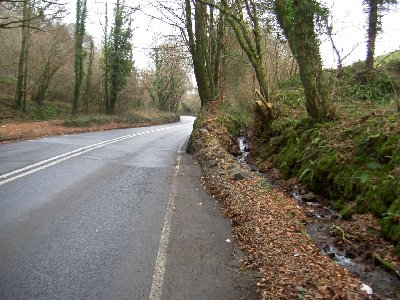 
Any road up, I gingerly made my way down the hill and west into St Ive, then north through Pensilva, over the top to Congdons Shop, then through to Launceston. From there I turned south, over Greystones Bridge, through Milton Abbot and Lamerton, then turned right, and back towards home. A good ride, and the latter stages were in sunshine!

I survived my "anniversary" all in one piece and completely unscathed.

Just read your report so sorry to learn of you accident.Hope you are progressing ok.