PRL wrote:Presumably the "Shared Road" sign which should exist but doesn't. Actually by analogy with the situation on shared paths it should go with a " give way to cyclists " sign.

Yup! I made it up.
See the attached illustration:
1. A sign in Haringey: the path goes through a park. It made me think how a similar sign (3.) is needed on most of our roads (a few million to remind motorists that we have a right to be on the road (I've had motorists shout at me "get on the pavement").
2. This is a French sign; I copied the logo for my new sign. I think it's much better than the UK cycle sign which only illustrates an inanimate object!
3. Of course there could be motorbike, lorry etc but it would make the sign very crowded (just like the roads), I just want to emphasise that cyclists do have a right to be respected
Gerry
(click on image to enlarge). 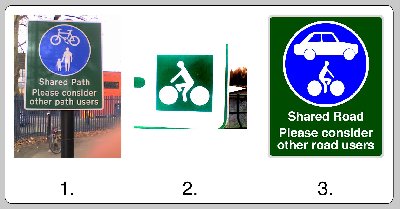 The sign I had not thought about when I started this thread would be for roads without pavements; ie. shared with pedestrians. Can anyone suggest a sign that currently exists (being a city boy I cannot think of one). 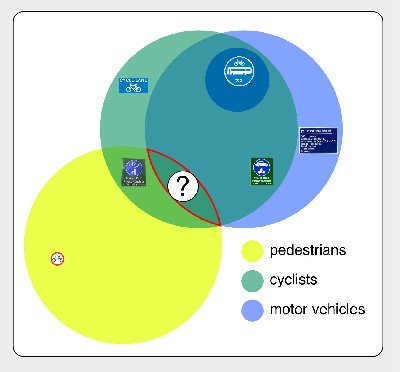 A road without at least one footway is indicated by the 'pedestrians' warning sign, people walking in a red trinagle, and the legend 'no footway for xx yards' but that's only if it's in a built up area where you might normally expect there to be a footway. Out on the open road, pedestrians mix it with everybody else, except in special situations.
Top

the most glaring error on the picture is that the no cycling sign is intended for roads on which cycling is prohibited - so that area should really be in the motor vehicle only section along with the motorways.

Though having said that, shared use with pedestrians is becoming so common, that it is increasingly and being used to indicate normal pavements, where cycling is in any case prohibited.
Top

anothereye wrote:3. Of course there could be motorbike, lorry etc but it would make the sign very crowded (just like the roads), I just want to emphasise that cyclists do have a right to be respected
Gerry
(click on image to enlarge).

Sign 3 would be a complete disaster. If it started to be used, then the implication would be that cyclists were not welcome on any roads without the sign.

it is also worth noting that Living Streets do not like the cycle/pedestrian sign, because of the incorrect implication of cyclist priority, by putting the bike above the pedestrians.
Top

irc wrote:This act does not appear to be online but there are references to this section ie

If any person shall wilfully ride upon any footpath or causeway by the side of any road made or set apart for the use or accommodation of foot passengers; or shall wilfully lead or drive any horse, ass sheep, mule, swine, cattle or carriage of any description, or any truck or sledge, upon any such footpath or causeway or tether any horse, ass, mule, swine or cattle on any highway so as to suffer or permit the tethered animal to be thereon.

Every person so offending in any of the cases aforesaid shall for each and every such offence forfeit and pay any sum not exceeding level 2 on the standard scale above the damage occasioned thereby.

"The prejudice against bicycles has all but disappeared in London; [...] people in general look with pleasure upon the flying wheels as they scud noiselessly along." - London Standard, Aug 1879
Top

Pete Owens wrote:Sign 3 would be a complete disaster. If it started to be used, then the implication would be that cyclists were not welcome on any roads without the sign.

I tend to agree; unless they on all roads that cyclists can use. But we already have cycle signs and road markings on some roads and not on others.

If I can just add to dan_b's helpful post about the Highways Act which is still the riding on the footway legislation after more than a century and a half, the decided cases have held that the legislators intended to ban riding / driving along the footway. Although it does forbid tethering of animals on the footway, it does not say, "thou shalt not parketh thy carriage there" and that is why it is so hard to deal with footway parking.
Top

They have these 'share the road' signs on roads frequented by cyclists around Tucson, Arizona, although I remember some of them (the signs) had been shot at.

asr wrote:They have these 'share the road' signs on roads frequented by cyclists around Tucson, Arizona, although I remember some of them (the signs) had been shot at.

Ah, so they'd been up for at least a day then

They have experimented with the "Shared Road" signs here in Devon. I think they are an excellent ideea, but would need to be used sparingly or we will just have a mass of new signs which motorists will learn to ignore.
See here for an image of the sign, and comments as to how it has been recieved -
http://www.devon.gov.uk/countrymile-newsfeb09.pdf
Top

dan_b wrote: The prejudice against bicycles has all but disappeared in London; [...] people in general look with pleasure upon the flying wheels as they scud noiselessly along." - London Standard, Aug 1879

...I look forward to quoting this during my next argument with a motorist.

In anothereye's venn diagram, the section in yellow shows the 'no cycling' sign, red ring, white center, plus picture of a bicycle. There is another sign 'no vehicles' which is a red ring and a blank white center with no picture in it. It is hardly ever used. I can only think of one location where I have seen it used and I struggled for quite a while to remember what it meant. My initial reaction was that is was a speed sign that had been vandalised by someone removing the numbers.

Regarding the 'no cycling' sign, you mostly see that on narrow footpaths and alleyways. If it were used on wide footpaths I am wondering if you wouldn't get someone trying to get their car down it

We have a good local cross-country cycle path from town to a village (completely away from any road). They've used a "No vehicles" sign at the end of that - which of course means theoretically that bikes shouldn't go down it. Funny, except that every kid going down there is being taught that that road sign doesn't apply to bikes.

"No cycling" signs are needed on alleyways because the general prohibition against pavement cycling applies only to footways alongside roads. It's perfectly reasonable to want to stop cycling down many narrow alleys, but Councils need to make orders to do that, and erect signs to show that they have done so.

Obviously there's a separate general prohibition against cycling on footpaths, in the sense of cross-country ones that walkers use.
Last edited by drossall on 10 Oct 2010, 12:05am, edited 2 times in total.
Top

In general, the no cycling sign is only officially used for what might be called urban footpaths, ginnels, alleyways and the like which do not run alongside a carriageway and so are not covered by the Highways Act and the council creates a byelaw.

The no vehicles sign usually has an explanatory plate - 'play street' used to be one but the idea of excluding motor vehicles from a street so children might play is not one that attracted a lot of support among people who would prefer to exclude playing children from the street to that they might safely park their own cars. The sign is used for pedestrian precncts and we have some around here which change with a sort of internal venetian blind at different times of the day

Since typing the above, I've done a streetview to have a look at them in central Leeds and I see the automatic ones now show the flying motorbike which only prohibits motor vehicles. It looks as though common sense has prevailed.

(I've probably posted along these lines before - these topics recur like lighting articles in autumn mags.)