Heltor Chasca wrote:I like my Lion Works bell. It has a long sustain in D

. It is loud but mellow and less aggressive than the little pingers. I can also whistle loudly and will also bellow if my blood sugar is low

c0d3x42 wrote:From what i understand, as you get older the ability to hear higher pitched sounds diminishes. Anecdotal evidence backs this up in my opinion, i've rung my pinger bell at 20-1m away and not been heard by the elderly. At which point i revert to an "hiya, can i get past please?"

Good point about hearing difficulties. I was told the same thing about my right ear that was affected after my stroke and how hearing upper tone range has been affected.

Cunobelin wrote:I have a Pashley Delibike with a big "Ice Cream Bell"

Funnily enough, there are a couple of ice cream vendors who ride up and down the prom and along the same section where the aforementioned incident took place. ("Ah..but they're not 'lycra-clad' racing cyclists like the rest of 'em!")

mjr wrote: I'm a big fan of brring and ding-dong bells, which have more range than a ping-ping.

[/quote]
I think the pitch and sustain of the bell is important as the quoted comments suggest. When I used to use a simple pinger bell, the slightest sign of moisture in the air, such as mist or light rain , would render it almost inaudible reducing its 'ping' to a mere 'thud'.
I now use an old retro aluminium bell which has a mellower ring to it. I like those heavier brass bells with a double striker mechanism within - but they are a lot heavier and take up a fair bit of handlebar room.

Audax67 wrote: What p's me off is when a group of people splits at the sound of the bell, half each side, thus taking up far more room than they would if they all moved the same way. You're never sure, either, that one of them won't decide at the last moment to nip across to the other side; followed, an instant later, by the dog.

Yes! Also groups of walkers with a child/children that turns round, sees you approaching and stands holding out their arms blocking you from coming past, the parents of which made no effort to stop her but just carried on talking! This has happened to me twice now.
Top

I recently undertook a long challenge walk with a dozen or so people on a trail frequented by cyclists and was surprised by how he vast majority approached (from behind) without using a bell. In many cases we only knew they were there by a brake squeak or an 'excuse me'. I said to my companions why just they don't use a bell, be so much easier for everybody. Simples!.
Top

There's a local shared-use path which I use very regularly on foot (either running on my own or with others), and which I have used exactly twice on my bike. When I cycled along it, I rang my bell whenever I approached pedestrians from behind, usually from about 40 metres away, which was time enough for them to hear the bell, turn round and spot me, alert anyone else with them, and decide whether to walk single-file or stand at the side as they wished. Nobody seemed the least put out by the bell and a few people actually thanked me for ringing it.

When I run along the path I'd say about half of cyclists ring a bell when they pass, and the other half don't. I find that the half who do (or who say "hello!" or "two bikes coming up on your right!"... this last being especially helpful to avoid surprising people) generally pass more carefully than those that don't. I much prefer to hear a bell, or to otherwise be told that there's one or more cyclists, than simply to have them zip past me.

So yes, I've found good reason to ring a bell from both perspectives, and no reason not to.
Top

I rather like that one of the cyclists was described as having 'great hair'...

Not getting involved in the Groundhog Day that is the usual bell and footpath witterings. My fingers deserve better.
Top

mrjemm wrote:I rather like that one of the cyclists was described as having 'great hair'...

Not getting involved in the Groundhog Day that is the usual bell and footpath witterings. My fingers deserve better. 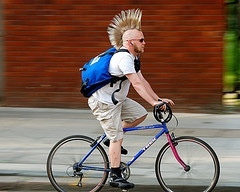 I find on lanes horse riders appreciate it if you ping a bell, preferably before you get too close. It gives them time to prepare for you passing. Dog walkers are much the same.
Top

Listen to these bells:
http://www.aviewfromthecyclepath.com/20 ... bells.html
I think the point about the note from pin bells not lasting is a good one.
Top

I was thinking about this thorny issue only this morning.
In my experience, operating my ping bell when approaching groups from behind nearly always results in confusion and indecision. I can so see why cyclists don't sound them - at least when you approach in silence you can read their body language to judge if the gap you're aiming at is likely to stay navigable!
I was wondering if I could think up a suitable non-confrontational phrase to shout, instead of using the bell - something like,"Excuse me my dear fellow/lady (delete where appropriate), I can't help but notice we are sharing some travel-space - I wonder if you wouldn't mind if I slipped past, to leave you to continue your journey in peace?" only perhaps pithier...
byyeee,
SiE
Top

One should sound the bell in a friendly way when still some distance from the people. Very often they are friendly when one cycles slowy by. A bike bell (dringaling) is a friendly noise. But one can never be sure if someone is not drunk or deaf or hearing loud musik on tiny headphones. Occasionally there are conflicts, joggers often refuse to single out.

The German cycling club has a solution for such conflicts, that cyclists should use the roads instead so that we have conflicts with truckers (terrorists) instead of walkers (people).

One could not make it up

(
Entertainer, juvenile, curmudgeon, PoB, 30120
Cycling-of course, but it is far better on a Gillott
We love safety cameras, we hate bullies
Top

Cyril Haearn wrote:The German cycling club has a solution for such conflicts, that cyclists should use the roads instead so that we have conflicts with truckers (terrorists) instead of walkers (people).

But FWIW I think there's no shortage of CTC members who will happily tell you that as soon as he wants to exceed walking pace, little Johnny should ride on the A1 instead of the adjacent cycleway.

But perhaps the more restrained of us would limit ourselves to saying that using the roads can sometimes be safer and more convenient if one wishes to travel at a decent speed, particularly if the adjacent 'cycleway' is just an adjacent 'footway' with blue signs on it

To be honest we can blame the uncivilised and ill mannered British cyclists and pedestrians all we want but no other nation has to contend with so many inappropriate shared use pathways acting as major cycle routes. If you bunged Dutch cyclists en masse onto narrow pavements and footpaths with no further reallocation of space then no doubt there would be confrontation. It is almost guaranteed by design. Expecting pedestrians to not wear headphones and diligently walk in die-straight lines wouldn't work anywhere in the world. A bicycle bell is a wonderful and necessary thing but it is sheer lunacy to design cycle routes so narrow that it is necessary to sound one every time we meet another person
Top

Yes, unreconstructed footway conversions are rarely good. However, it's better to say it should be rebuilt as a cycleway than to say people should ride on the carriageway.

While it may be "sheer lunacy to design cycle routes so narrow that it is necessary to sound [a bell] every time we meet another person", the Netherlands is not immune from it, as the attached picture of one rural stonedust cycleway shows. However, I'd agree that we use them in inappropriate locations far more often than the Dutch! Reallocation of space is one fine solution to many of them. 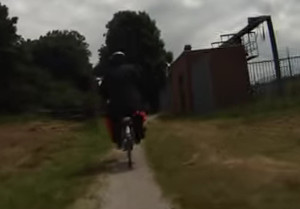 I think we agree.

For me avoiding rubbish farcilities is pragmatic rather than ideological. If they are a better option than the road I'll use them.

It isn't necessarily wrong to allow bikes to use narrow paths like you are showing. I'd probably draw a distinction between existing paths we wish to permit cyclists to use and routes intended for cyclists. Many towpaths and bridleways are similar in width to the path in your picture and can make great leisure routes as long as we are content to ride more slowly and submissively than on the roads. Where such paths are used for gentle leisure rides, where pedestrian usage is low, or where such paths make up a very small part of the journey this is no great problem. Where routes are promoted as cycle routes and used by commuters and utility cyclists as a genuine alternative to roads (or where there is high pedestrian usage) narrow shared use is totally inadequate and confrontation will likely occur
Top

pwa wrote:I find on lanes horse riders appreciate it if you ping a bell, preferably before you get too close. It gives them time to prepare for you passing. Dog walkers are much the same.

Off topic. I watched a horse go over a Pegasus crossing for the first time this week, and I do not envy them. far more skittish than any bike I have ever ridden...

BottomGear wrote:I recently undertook a long challenge walk with a dozen or so people on a trail frequented by cyclists and was surprised by how he vast majority approached (from behind) without using a bell. In many cases we only knew they were there by a brake squeak or an 'excuse me'. I said to my companions why just they don't use a bell, be so much easier for everybody. Simples!.

yep...this morning I gave a merry ding dong to a lady dog walker who responded:"Ah! A bell! You're the second cyclist to use one this morning - wonderful!" and she seemed genuinely pleased. I just grinned stupidly and said, 'You're welcome - thank you!.''
Top
Post Reply
90 posts