Hello,
Probably an age old Q but please what are the benefits of the full sus.
I am new to the mountain biking and am of a certain age.
I'm looking to do some serious off road riding in my forthcoming retirement.
I have a hard tail not used much but fancy a quality full sus.
I have seen some in the sales.
But wonder if it's worth my while as this could be a big outlay money wise..
Am I being seduced by style and the good looks of the bikes I am looking at.
Also please are there any decent trails in the East Riding /North York Moors area which warrant a full suspension bike.
Thank you,
Steve
Top

I have a hardtail resting in the shed.

Personally my thoughts are that a full-sus' will be heavier and need more maintenance attention.
Having never ridden a full-sus I would expect it to be better over rough ground when climbing and certainly when descending.
But for me I will stick with the hardtail.
There's no such thing as a tailwind.
It's either a headwind, or you're going well.
Top

Better on technical climbs and descents. Much more grip on climbs which saves your legs. More comfortable, more controlled and look better. More expensive and heavier.
Overall, it depends on your terrain. I have a 29er hardtail for fast tracks and a full suss for more twisty and technical trails. If I had to have one bike, it would be a lightweight 120mm full suss.
Top

A hardtails rear wheel will bounce over loose stones and sticks. On a climb you will loose grip and momentum in this situation. A really good full susser will handle that better. They are well worth it.

Al
Touring on a bicycle is a great way to explore and appreciate the countryside and towns you pass through. What do you do to make a difference?
Top

How many Cyclo - Cross riders use suspension .... ..
The Road Goes On Forever
Top

The big issue to me is how do you stop the rear triangle having side-to-side play in it?

I suppose the answer is get a decent one like an S-Works not one that was £260 for the whole bike new.

When two cyclists get married, they should throw anodized cable crimps instead of confetti.
Top

+1. Also IME you can use the saddle more without getting your back (side) hammered, so can use a more upright riding position (which suits my lower back).
"42"
Top

I ride fully rigid.
Sure, someone with the same skill level on a good full suss might be faster down any given section of trail, but seeing as I'm already capable of riding fast enough to scare myself I don't see it as an issue. Despite being more rubber ball shaped than I was 20 years ago I don't bounce as well!

And I get to spend more time riding and less time and money maintaining complex suspension systems.
If you really feel the need for some extra comfort then fatter tyres are the way to go IMHO.
Top

This is difficult to answer definitively as it is a matter of preference combined with where you live and what routes you intend to ride.

All other things being equal the full susser will be heavier, costlier and require more maintenance. Having owned one, I went back to hardtails and rigid singlespeeds. Mine was undoubtedly highly competent but as a result a little dull to ride - it could simply stomp over everything. It felt a little isolated and uninvolving. Now, if I rode trail centres and other things sculpted to flatter the thing then I'm sure it would be a different story. However I like all-day rides on bridleways etc. now two hours in baggy shorts being 'rad'.

It was also heavier and hard work climbing (29lbs all up, so not excessive) especially by comparison with my Orange P7 hardtail.

In the same way that a modern BMW diesel saloon will outperform an E-type Jag, a full susser will be more comfortable and capable over really rough terrain, especially downhill. I suggest you rent or borrow a few and make your mind up. I flogged mine on after 6 months.
Top

I need full suspension on the road with the state of our roads, nevermind on trails!

In fact I know of trails/bridleways that are smoother than our roads are.
When two cyclists get married, they should throw anodized cable crimps instead of confetti.
Top

Manc33 wrote:I need full suspension on the road with the state of our roads, nevermind on trails!

In fact I know of trails/bridleways that are smoother than our roads are.

Where do you live, Russia? Thank you for the posts.
So any recommendations for a hard tail with a £2 k budget.
I would like to use it for trails and some xc.
Not sure where as I am in the East Yorks area.
Thank you
Steve.
Top

You don't want to ask me because I will just say get a used metal S-Works frame for under £400 then get a mid range fork and all used XT/XTR parts... and create a bike that would cost £3000 for probably under £1,000.

Then take the other £1,000 and go on a nice holiday, thinking all the time about your XT/XTR equipped bike back home.

If you spend £2,000 on a full suspension bike, you'll almost certainly get a bike with wall to wall SLX stuff on it that will be worth about £600 in two years. Meanwhile if you go the used route and you're stingy/can wait/can build it yourself you'd actually be able to sell the bike in 5 years for more than you paid for it, or if that doesn't work strip it down and sell off the parts.

A nice shiny new bike just doesn't have any appeal to me at all when I know I can get used parts like Dura-Ace or XTR that are the best, for about the same cost as new XT/Ultegra. I always go for the top stuff these days if I can.

The only thing to avoid IMO is cranksets etc, who cares, you can get a half decent crankset with removable chainrings for about £25 posted from Rose. I don't know how they do it. So spending £300+ on a crankset is to me the silliest upgrade.

Then there's things that must be the top stuff, once you use it you can't go back to XT or SLX, like shifters, derailleurs and brakes.

In fact I would argue if you have got XTR shifters and both mechs, and the brakes are good ones like the BB7's then what upgrade really do you need to do beyond that?! I can't think of anything.
When two cyclists get married, they should throw anodized cable crimps instead of confetti.
Top

Hi,
You know you want to 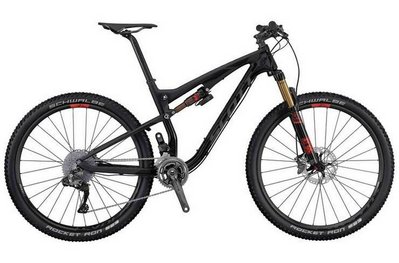 I used to ride a lot in the "Forest of Dean" (not the trails centre - the woods) with friends and we all rode hardtails. They were far better on the mainly dirt surface. The only time we used to think about full suspension was on worn out, rocky, rooty parts on the odd excursion in the "trail centre".
Full suspension if it's rocky and a hardtail if it's not I reckon. And a steel one is always better, as with any bike.