bisikletci wrote:Update for anyone that's interested - I live in Euroland but am paid in pounds

- so sadly the Vaya (which is way more expensive here than the other two) is definitely out...

It turns out that I may be able to get my hands on a reasonably-priced Vaya frame. Does anyone have an idea how much it would cost to kit one out? I realise that's a bit like asking how long's a piece of string, but let's say for components similar to the level on the complete build. reohn would it be rude to ask how much you spend building yours up? I'd need a mechanic/bike shop to help put it together, so that'd also need to be factored into the cost.

Well it depends as to how long you want the string to be,but a reasonable and durable build with a decent pair of wheels would be around:- £650 (possibly a little less if you shop around) on top of the cost of the frameset,for that you'd get Deore/Tiagra level kit,BB7 brakes,STI's and hand built wheels,plus labour to build it.
Add £30 for mudguards and a bottle cage.

The Vaya frame option fell through sadly (it was available at a good price but I couldn't get it in the right size).

I've struggled to get a test ride on any of the bikes and was leaning towards just buying an AWOL and hoping for the best. However I'm also now having a look at the Marin Four Corners, which is much cheaper again (more than £200), would be less of a hassle to get hold of and seems fairly similar to the AWOL (the brakes are worse, but I could upgrade to the same brakes on the AWOL for much less than the price difference). Unfortunately I can find very little in the way of reviews or reports about the bike, and can't get a test ride of it either (would need to be an internet purchase). Anyone have any insight into it? It has slightly less tire clearance than the AWOL (reported around 2-2.1", vs around 2.1" to 2.2" for the AWOL, though I seem to remember something saying that the base AWOL's derailleur left less than the reported room), which is a bit annoying as I'm increasingly looking at some pretty rough routes near where I live, but I'm not sure I can justify a difference of a couple of hundred pounds over one inch or so. Other than the brakes can anyone see any major differences between the two bikes?
Top

I've been riding for 25 years on MTBs with 2" tyres and often less. Frankly I doubt if the limitation on maximum tyre size will be noticeable unless you intend bombing down DH courses at over 30mph.
Top

See you can have your cake AND eat it . One bike CAN do it all.
Top

A conclusion to this thread:

In the end, I went for the Marin Four Corners, on which I got a very good deal online (about £200 less than I could get the AWOL, which was also on sale, for).

I got hold of it yesterday and took it for a 20k ride through the forest, including a few short bits of single track on which I wouldn't have taken my hybrid. Based on first impressions, I'm pleased with the bike, though I need to make some adjustments to it. I may come back with a review of it once everything's sorted out and I've had a few good rides on it.

I was ever so slightly gutted to see, just after I'd ordered the bike, that Salsa had launched a new, cheaper/lower-spec Vaya, which is actually priced the same (RRP) in the US as the full-priced Four Corners. However the FC was heavily discounted on its US RRP, whereas Vayas seem to sell for a lot more here than their US price, so in practice I could have ended up paying nearly twice the price for it as the FC, which I wouldn't have been willing to do; it also isn't actually available here yet and I wanted to get a bike before the end of the summer.

Pic of the Four Corners attached. Thanks again to everyone who replied. 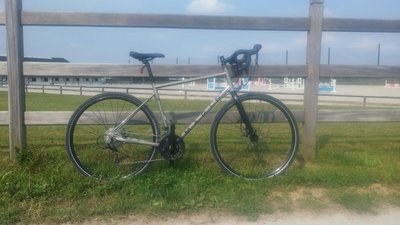 I believe that is what's known in these parts as The Business. Looks ace, really capable, look forward to hearing more about how you get on with it - have fun!