Please be fair and thoughtful in your opinions. No rants please.
Post Reply
32 posts

I travelled to Starbeck from Derby just over a fortnight ago to collect my new steel Spa Cycles Tourer. After months (no, years

) of dithering, the excellent review in Cycle and the positive comments on this forum swayed me from its rivals (predominantly Thorn and Surly). There was also the saving, which itself can be put towards the purchase of another frame for a future project.

It was my first visit to their premises and I wish I’d had longer to explore their Aladdin’s cave of bikes!

The bike was immaculately set up, and apart from slightly lowering the saddle, it was ready to ride when I got it back home.
First impressions are really good - a proper traditional touring bike good for day rides and longer expeditions. Hopefully this is the bike which will do LEJOG next year; and equally hopefully, by then the Nidd saddle will be broken in. I had been warned that they were hard (Australian hide) – they are!

I opted for bar end shifters to allow for a greater range of gearing options and to facilitate the use of standard V-Brakes which in turn would allow for wider tyres. I have been pleasantly surprised after years of STI how easy it was to revert to using these.
The handlebars help. I had not used shallow drop before and I’m really happy with them.

The whole process of ordering and collection was very well handled, just wish I’d had more time when I called in.
I did see the prototype disc brake equipped tourer which looked fantastic, and the steel version of the Adventure bike which I had not been aware of.

All in all, although it’s early days, I’m really happy with my choice of bike and can really recommend both it and Spa.

We NEED photos. It's good to hear a happy shopper....b 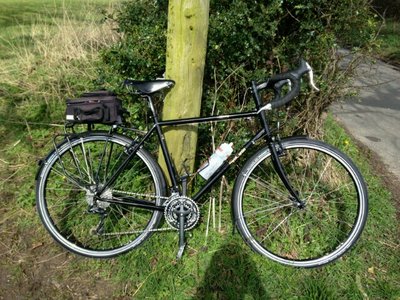 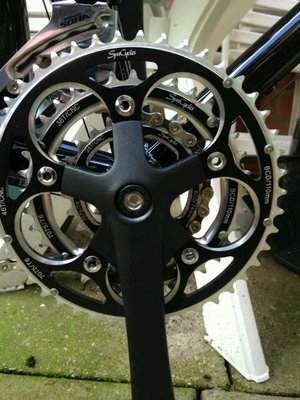 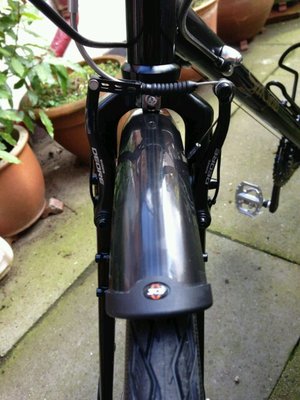 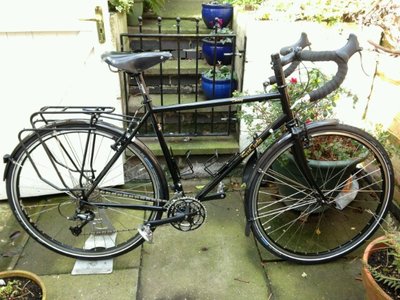 Looks good, will it be making an appearance with your local CTC group? It'll have good company with at least a couple of other Spa bikes.
Top

Alport: is it a 54 or 57?
When the pestilence strikes from the East, go far and breathe the cold air deeply. Ignore the sage, stay not indoors. Ho Ri Zon 12th Century Chinese philosopher
Top

Making the choice was definitely made easier by the geometry charts on Spa’s Web site, and in particular by 531Colin’s excellent guidance on this forum.

PH – I’ve seen the very occasional Spa Cycles bike around and about. I take your point, though, about making contact with the local group!
Top

Alport: many thanks for that and many thanks for sharing your experience on here. I think we are incredibly lucky with this forum being able to discuss every last detail of sizing, bike frame, components etc at our leisure. I feel sorry for someone who just walks into a bike shop and hopes to be well advised (it probably happens but not that much if we are to believe the horror stories on here).
When the pestilence strikes from the East, go far and breathe the cold air deeply. Ignore the sage, stay not indoors. Ho Ri Zon 12th Century Chinese philosopher
Top

Alport wrote:PH – I’ve seen the very occasional Spa Cycles bike around and about. I take your point, though, about making contact with the local group!

- in my case I had to get an aftermarket one from Rose in Germany as it was sent out with it cut down as far as possible ( why oh why do you do it Dawes?)
Top

Well done on buying the Spa tourer and I hope it gives you many pleasurable miles.

Th Nidd is hard but could I suggest loosening completely the cord which draws in the wings of the saddle and reducing the tension of the leather by using the Allen-headed bolt. This will speed up the breaking-in process by allowing the leather more movement and can be readjusted when the leather is more pliant. The leather being thick is unlikely to develop dimples aka the Brooks B17 but will be comfortable using the "hammock" principle similar to the Giles Berthoud range of saddles.
Top

Alport. Great pictures. Am considering buying a Spa Steel Tourer too. What size chainrings, cassette and tyres did you go for. And how have they performed?
Top

Hello
Sorry for the delay, only just caught up with your request.
The Tourer is still going strong and I can definitely recommend it.
Although not the lightest of bikes it is certainly my most comfortable, even with the Spa saddle which does take longer to break in than a Brooks.
I am glad I kept the steerer uncut, although I have not had to change anything to date, it does give me more options for the future.
I went for 46/36/24 Stronglight chainrings with a 12/36 cassette. My thinking was, and still is, that I would need those low gears! The tyres are standard Marathon 700 x 35. I have bought a pair of Supremes which I shall I put on after the winter. (I have Supremes on another bike and I really like them).
Spa Cycles were very helpful in making sure I got what I wanted, and the bike was spot on when I collected it from their shop.
I considered the Surly Trucker and Kona Sutra, but decided that the Spa Tourer offered better value for money, and although tempted by disc brakes I didn’t need them for what I would be doing. The CTC review by Chris Juden helped to seal the decision.
All in all a brilliant traditional touring bike!
Top

Some years ago I bought a Thorn Audax Mk3 (size 525) as a light tourer. I liked it but as my hand grip weakened with age and thumbs started to become painful I no longer had the strength to brake safely with the R450 DP sidepulls. Swapping them for R650s with SwissStop pads improved things but not enough for me to feel confident on steep descents.

Recently I bought a 51cm Spa steel tourer frame and moved all the bits over apart from the brakes which I replaced with mini Vs. I wondered if the chunkier forks would give a harder ride than the Thorn (mine had the forks with fittings for a front rack) but not at all - the Spa is very comfortable and mops up bad surfaces amazingly. Unloaded and with the same light-ish wheels it feels just as fast as the Thorn and handles even better - very responsive yet completely predictable. For a full-on camping load you would probably want stronger wheels and tyres. 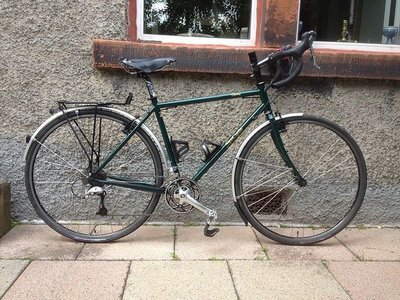 I may cut the steerer down a little - I asked for a long one to be on the safe side.

I did the same almost 2 months ago...frame and fork.
I went for the metallic green option as it was more 'sparkly'

Colin531 and I had a discussion about 700c wheels in small frames and how it was difficult to get the two to work. So when the Vantage finally bit the dust, I opted for their 26" wheeled 48cm version and Colin was right, my new Spa handles flawlessly. Like you, I think this is the best handling bike I've ever owned. Safe and predictable but no slouch either.
The one area that lets the bike down is in tyre clearance. The majority of 26" tyres are roughly 2" wide and this frame absolutely will not accept them without some serious rubbing on the chainstays.
My 50mm mudguards just about fit and the 1.75" Landcruisers just about fit under the guards and that's about the only nobbly tyre I can think of that will fit. Smooth road tyres that fit are very limited in choice also as basically, aside from maybe 1.5" City Jets, a few select Marathons and 1.75" Impac Streetpac (made by Schwalbe), no one else makes 26" tyres that small. If Schwalbe stop making these tyres I'm screwed.
Other than that niggle, brilliant brilliant fantastically brilliant bike. 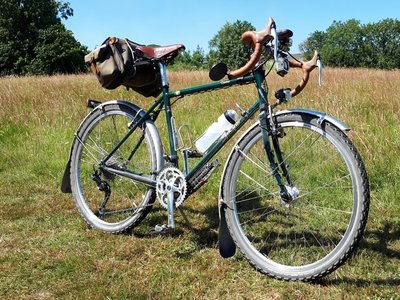 Vantage wrote:The one area that lets the bike down is in tyre clearance. The majority of 26" tyres are roughly 2" wide and this frame absolutely will not accept them without some serious rubbing on the chainstays.

I have the same problem with my Sardar. Basically you have to accept that it's a tourer not an MTB so 1.5 (even 1.75) is a reasonable width and you might not wish for more. The problem, as you point out, is choice (not the size per se).