For discussions about bikes and equipment.
Post Reply
44 posts

as posted in another thread, I wondered if this deserved a thread of its own.

I have a plan for a mad experiment; it is clearly possible to wear sprockets (a lot) by regularly changing chains whilst preserving the tooth profile well enough to run a new chain. Thus I have in mind a 'reverse-wearing procedure' for cassettes, which aims to resurrect sprockets that are already a little bit too worn to take a new chain.

It is predicated on the assumptions that,

a) at any stage, it is possible to fit and use a chain (without problems) that is ~0.2 or 0.3% less worn than the one that is currently fitted, and that
b) the sprockets will 'wear in' to the replacement chain fairly swiftly.

We've all done it; intended to change a chain a bit sooner than we actually did, and fitted a new one only to find that it skips on the worn sprockets. Occasionally I have 'fought the system' and run a new chain on slightly worn sprockets until everything beds in again. But it can take a while and there is always a risk of skipping under some load.

I've tried de-hooking sprockets (by grinding) and this is only a partial success; the problem being that once the sprocket is slightly hooked, the roller wants to sit in the hook, which is at a slightly larger PCD than with an unworn sprocket. As each tooth comes under load, the roller rides up a little ramp into the hook, and this affects how the other rollers sit in the sprocket too, such that even if the hook is removed, the chain may not feed cleanly onto the sprocket as it leaves the rear mech.

shows the wear ramps very clearly, although this is an extreme example. To make a worn sprocket work OK with a new chain, I think it is necessary to remove the hook and the ramp.

Lets say I run a chain out to 0.7% and a new chain skips on the cassette. I would then run the 0.4% chain (which ought not skip) for a while ( a few hundred miles). Then I'd run the 0.2% chain for a while, and finally the new chain ought to run OK perhaps.... The idea is that at each stage the chain isn't liable to skip, but the worn sprockets are gradually recovering their shape such that they will tolerate a new(er) chain.

Has anyone tried this sort of approach...?

I've only ever reversed sprockets to gain some extra life - uniglide ones. I have thought about filing hyper glide sprockets to allow reversal but not got there yet. BTW I have in the past recovered a worn chain which started slipping by using a tube and a hammer to tighten up the links.

It's the outer sprockets that wear the most for me, the ones with the smaller tooth count.
You can't reverse those, mind you, they only cost £3 or £4 each .............. providing they're Shimano.
Mick F. Cornwall
Top

We'll have to get together Mick as we wear the middle sprockets on the tandem - the small sprockets are almost new.

Brucey wasnt talking about reversing the sprockets a-la-Uniglide but about bringing them back into use with a normal chain by wearing the already worn faces back into usable condition through using a succession of chains each less worn than the previous one.

I have played at matching worn chainrings and cassettes (on a tandem with 86bcd chainrings and tandem freewheel, neither of which are easily found/afforded) with worn chains in order to try and keep using them while minimising further wear but never imagined they could be improved in this way.
Yma o Hyd
Top

meic wrote:Brucey wasnt talking about reversing the sprockets a-la-Uniglide but about bringing them back into use with a normal chain by wearing the already worn faces back into usable condition through using a succession of chains each less worn than the previous one....

indeedy. I have occasionally run a new chain with a cassette which contains one worn sprocket. After a while the skipping on that sprocket stops, presumably between the sprocket wearing and the chain enlongating, everything settles down.

However if my mad experiment works, there ought to be no skipping at any time during the 'reverse-wearing' procedure...

This thread chimes with something that i have wondered about occasionally over the years. 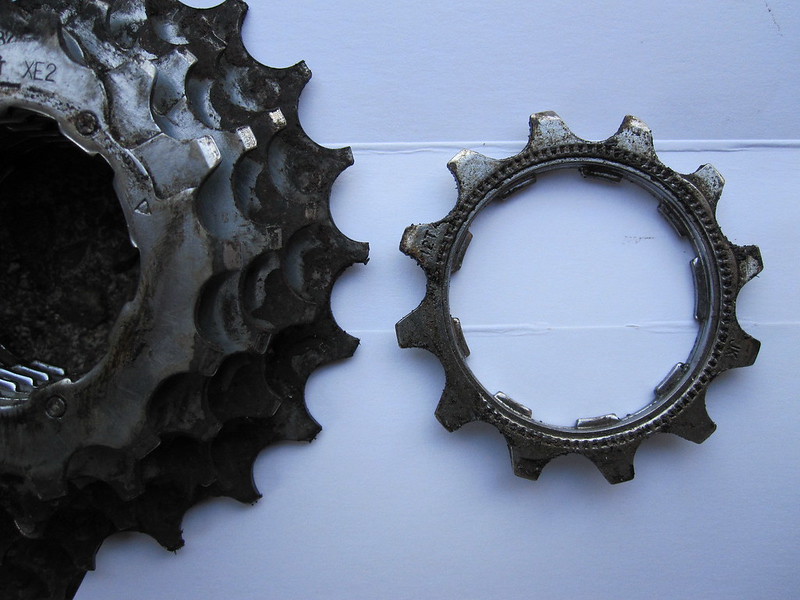 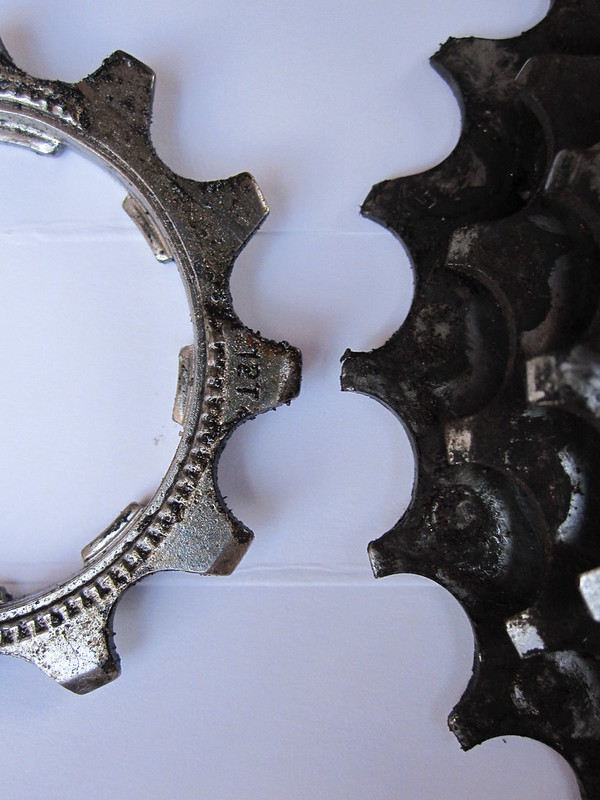 Thats a cassette thats been on my winter bike since at least 2011, with a bit of card behind the most worn sprocket (in the middle somewhere)
I'm in the habit of using a chain wear gauge which I'm told measures the "wrong sort" of chain wear, and i'm so extravagant that i throw chains away before the gauge reckons they are worn out. With the price of 8 speed chains, I can't be bothered to clean the things, but i reckon that i spend 10 times as much** on posh coffee than I do on chains. Never more than 2 chains a winter, and "summer bike" chains go on for a couple of summers, with no road salt.
A new chain has never skipped on that cassette (or on any other cassette that I have used like this).....but there is a lot of "wear" on the teeth. (on some sprockets)
So my question is......is that the "right sort" of wear?......
Because the cassette has never been run with a worn-out chain, is the tooth profile "right" despite the wear?....will my cassettes work until I wear the teeth right off?

531colin wrote:This thread chimes with something that i have wondered about occasionally over the years.

A new chain has never skipped on that cassette (or on any other cassette that I have used like this).....but there is a lot of "wear" on the teeth. (on some sprockets)
So my question is......is that the "right sort" of wear?......

...Because the cassette has never been run with a worn-out chain, is the tooth profile "right" despite the wear?....will my cassettes work until I wear the teeth right off?

yes I think so on both counts.

There is quite a lot of metal missing from the sprocket above but the tooth profile (on the loaded face of each tooth) still looks OK to me. I have offered new sprockets up behind 'worn' ones like that (that have never seen a very worn chain) and the tooth profiles look almost identical if aligned correctly.

By contrast teeth that have seen a more worn chain than that are no longer almost identical; they typically have a ramp at the base and a hook. Once the worn chain is a bit worse than is enough to cause a hook, the top of each tooth quickly gets spifflicated. To recover the tooth profile then becomes very difficult; lots of material needs to be removed from the tooth to get the right shape back again.

Interesting......
My summer bike has a 9 speed cassette made up from 2 cassettes (so i get intermediate ratios I'm happy with)
....so i could try your test of lining up the loaded faces of a worn sprocket and a similar new sprocket.
Theres probably less wear on the summer cassette, due to the absence of road salt.
Bike fitting D.I.Y. .....http://wheel-easy.org.uk/wp-content/uploads/bike-set-up-2017a.pdf
Tracks in the Dales etc...http://www.flickr.com/photos/52358536@N06/collections/
Top

An interesting experiment and I await the results, perhaps after Brucey has ridden 800 miles.

Incidentally, I rarely dispose of part-worn chains and now have a few of them, some single speed, some 6 speed, some 8 speed. The best way to store them is empty VHS cassette boxes, one chain per box. They're made of quite tough plastic and have a built in 'label window' on which you can write the width, length and wear. The label stays clean even when the box is handled with oily hands.
Cycling For Transport
Top

Any idea of the mileage?

I too wonder whether cleaning 8 speed chains is worth the hassle and expense of cleaning. As you note they don't cost much. I put on a new chain 1500 miles ago and at first it started slipping slightly on the 28 tooth sprocket (next largest). After a little mileage it seemed to "bed" down. According to my Park chain gauge I can't detect significant chain wear at the moment.

I've looked at the cassette, which has now been 8500 miles, and the sprockets don't look particularly worn or hooked, but maybe I need to look closer.
"It takes a genius to spot the obvious" - my old physics master
Top

Heres the corresponding summer bike cassette, again since 2011...compared to an un-used 8 speed sprocket the same tooth count, but black.... 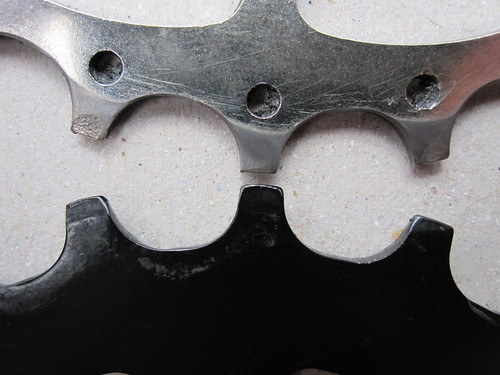 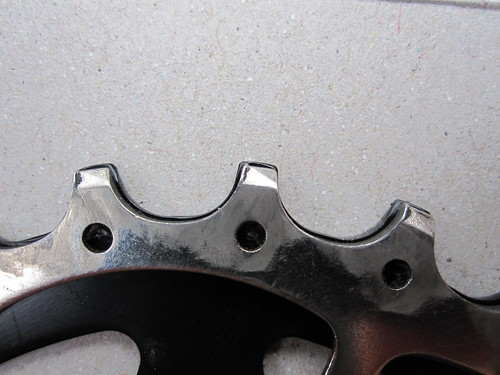 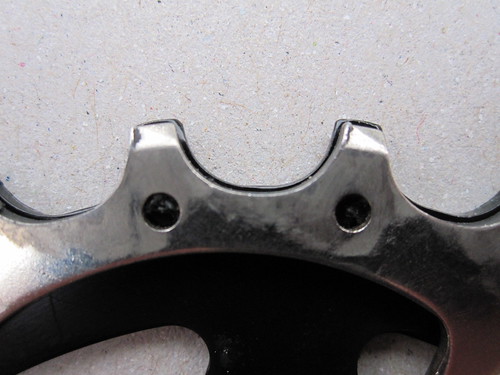 why has there never been a cassette made of carbon?
Top

It has been tried

but presumably the results were not encouraging enough for others to follow suit.

i would have thought that a pro rider would have tried one in an uphill TT by now but maybe they are that bad..! or maybe there hasn't been such a test.

it's not possible to have a screw thread in carbon i assume looking at the small sprockets there.

re. tooth wear. i did once wear out a 1/8th fixed sprocket. the quality was so poor that the teeth had started to twist along their length resulting in a strange trnasmission to say the least!
Top
Post Reply
44 posts