DIscuss anything relating to non-standard cycles and their equipment.
Post Reply
521 posts 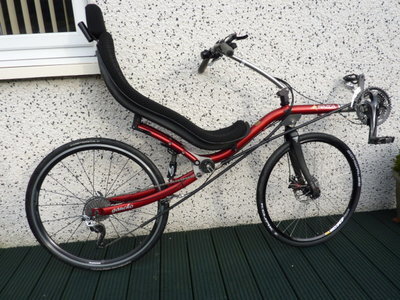 Here,s my Nazca Gaucho,recently acquired but I won,t be keeping it ;bents are not for me.Will be selling next week.
Top

Really? I would have thought that was one of the easiest all round bents to live with provided you are tall enough.
Top

After a month,I decided to manage my elbow problems by adapting my upright.To be honest,it was a relief to get back on it,particularly on hills.Yes,I know you need 5oo-1000mls to get conditioned but would knees be compromised,it felt like a possibility.Its "un-handiness",for want of a better word,was another small grouch.The only advantage was comfort over distance.I,ve satisfied curiosity but cutting the experiment short.
Top

The force is not strong in this one.

How much are you selling it for?

Not sure if I'm interested or not but if you're selling it then letting us know how much on here can't hurt. It certainly looks a nice bike.
Top

My first trike, I'd fancied one for a time so when this came up it was worth the long drive to test. Of course bought on the spot, so much fun.
As it was 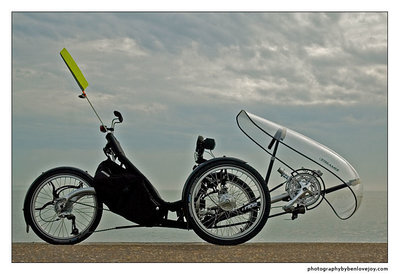 Nice, Front mudguards are a bit superfluous on a Q. Any crud coming off the tyres is going to miss you 99.9% of the time. I think I prefer the older gull wing swing arm suspension to the current ICE quadrilateral design.
Top 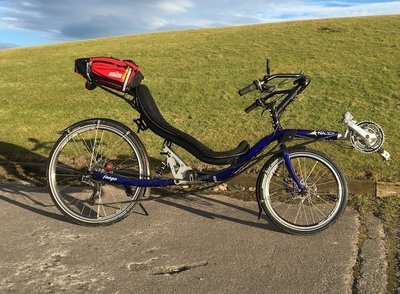 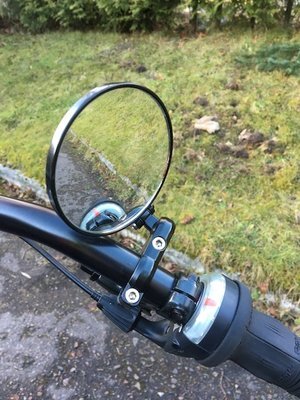 Looks good. I know someone else who made the same change a couple of months ago and has likewise gained much confidence with the bike. Tiller is handier when you need to transport a bent though.
Top

I swapped from uss to oss (with a home made stick riser and north road bars). It wasn't a change from tiller steering, so it didn't really affect anything in the riding/control experience. But, one advantage was in being able to walk alongside, for example when manoeuvring on pavements/parking situations in town or walking up steep passes on tour.
Top

My recumbent has the seat at just the right height for me to push on and it's easy to control the steering by tilting the bike. Feels like the bike was made for me to walk alongside pushing it! Very ergonomic!

Still I prefer to ride it.
Top 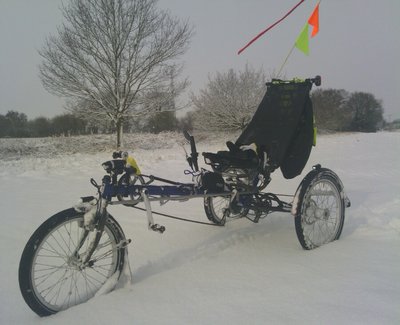 I've never ridden a trike in snow, but always wondered how well it'd grip. Well, today I had the opportunity, with our part of Suffolk getting a good few inches of crisp, dry snow. Here's my "Snow Hare" - a 20" Hase Lepus that is pretty much original spec. (circa 2003, I think). The seat coverings is probably the only proper modification - Hase original seat frame, but with Al tubing extensions at the top, and covered with a standard ICE mesh seat. I recently replaced both derailleurs with NOS versions (it has a 3-speed rear cassette, and a 9-speed intermediate cassette), new chains, and replaced the bearings for both drive and non-drive side rear axles. I'm pretty sure the reduced drag in the drivetrain made absolutely no difference today.
Top 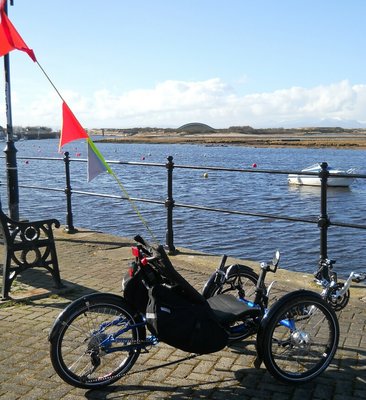 What's weird is I had called Ben the day before yesterday to find out if he stocked spare parts for ICE (I have a bent rear mech hanger).
Top

Well it didnt say 'current' so here is one from race day at Salt Ayre during Lancaster Cyclefest - many many moons ago!

Me [center] on my Vision R40 at the time and Mike Burrows on his Ratcatcher disappearing out of frame right during "Devil Takes the Hindmost" [indeed!]
Sometimes in life things happen for a reason. And sometimes that reason is because you are stupid and make bad decisions!
Top
Post Reply
521 posts