I’ve wintered sheep very close to that house. Up Whittle lane and to Parbold.
Whatever I am, wherever I am, this is me. This is my life

I buy a fat bike and a week later it snows, coincidence? It's deeper now, if it's still there when I wake up I'll pop out for a ride. 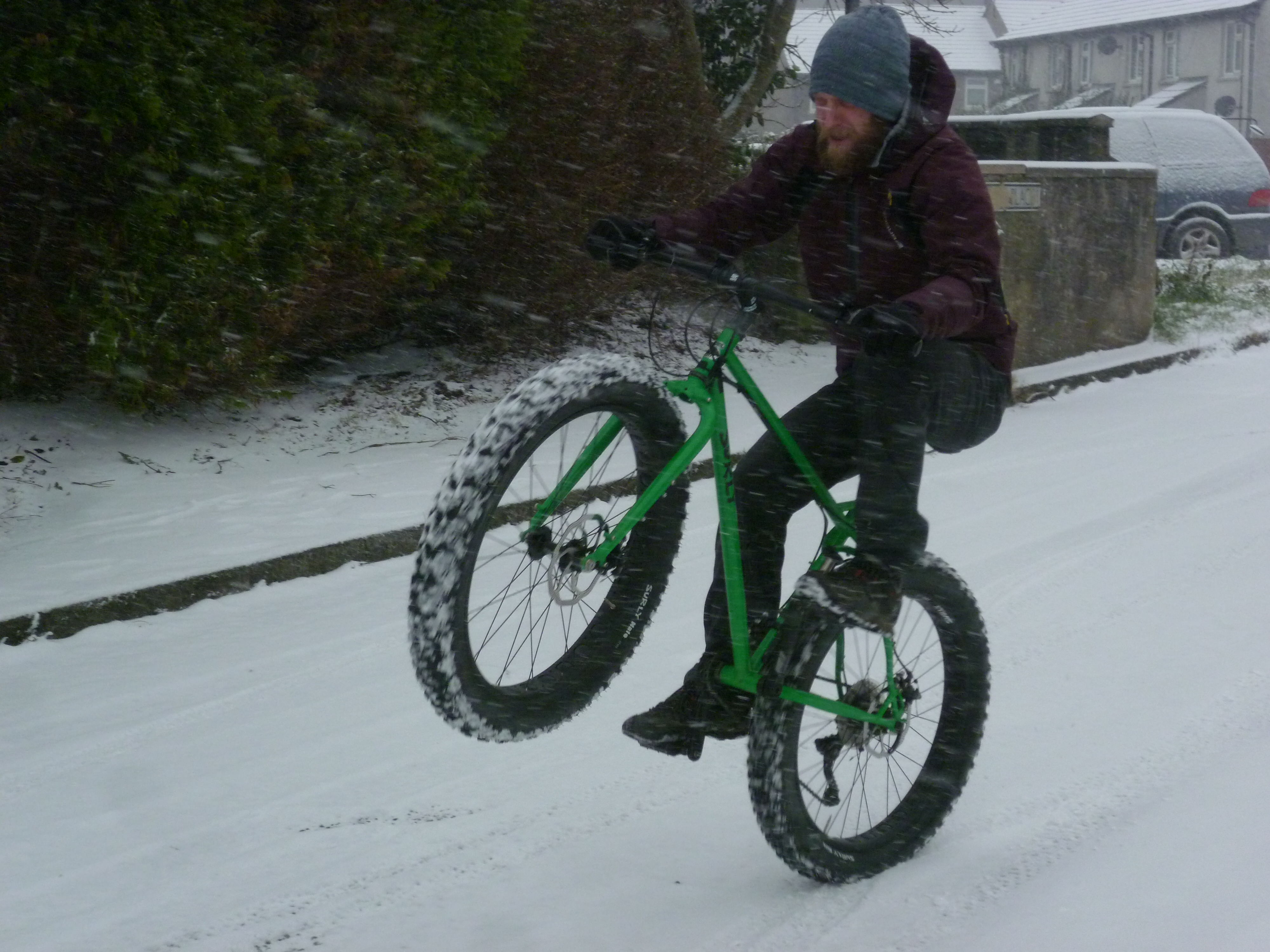 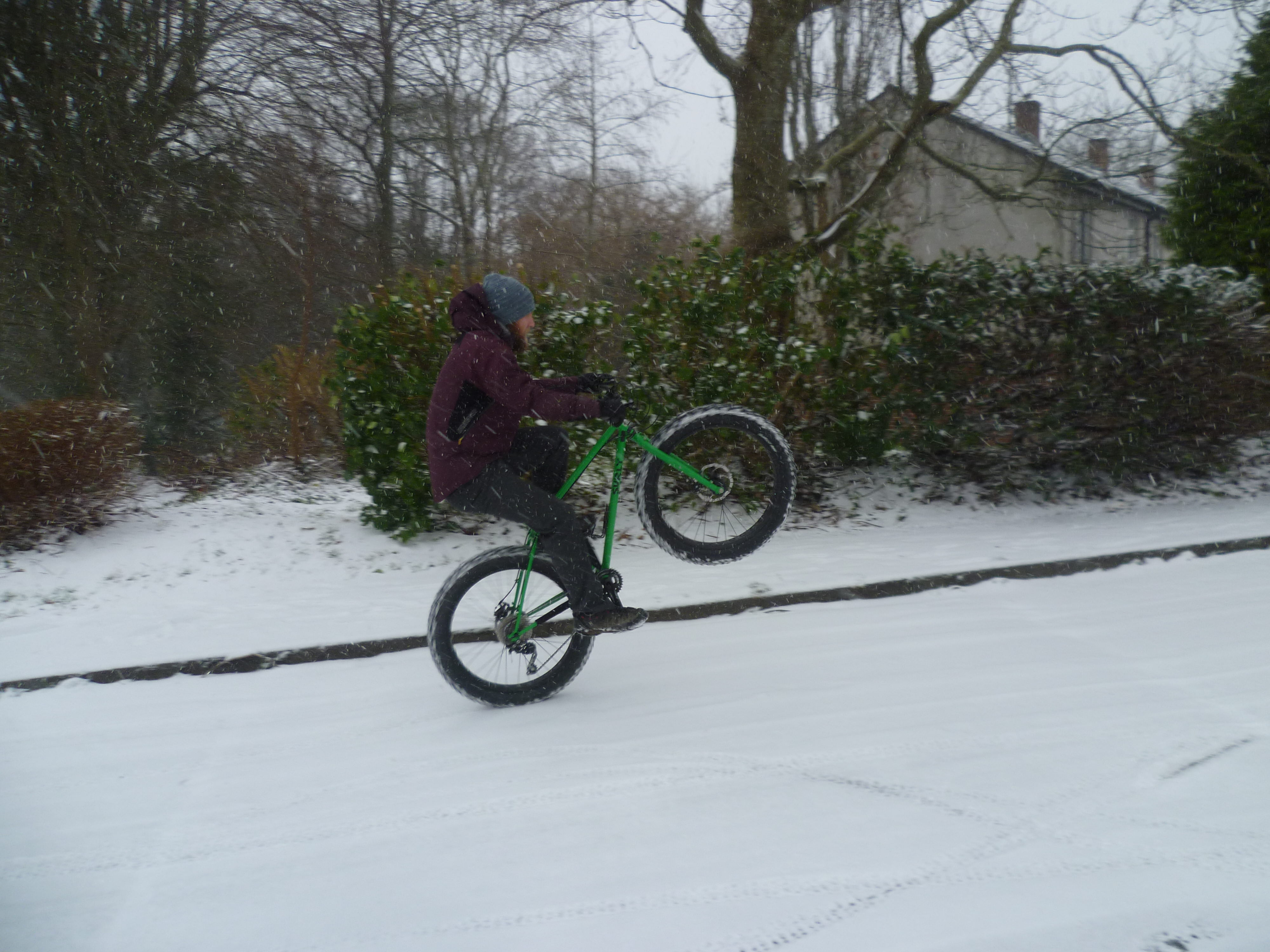 Well todays commute came about because a couple of my neighbours needed "vital" suppllies nappys, milk,beer, etc. - and various 4x4's were blocking the route. I chose to use my MTB bike ( Dawes Durango - otherwise known as my "shopping trolley") for this due to the conditions.

It was a 14mile round trip to Rhayader by the quickest way but over 17 the way I chose. I went over the "bouncy bridge" at the confluence of the Avon Elan and Wye rivers, and various other lanes.

I wonder has anyone else gone on a bike commute lately because it is the only viable method in the conditions?

Have to get off the internet again right now due to lack of electric. 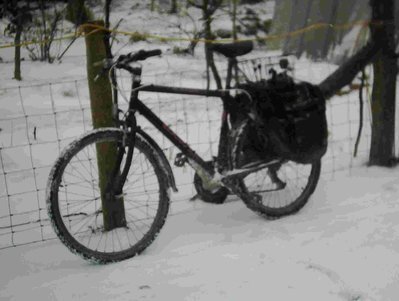 Far too much helium in your front tyre.
Top

The bike just makes you act like an idiot. Some of the most fun I have had cycling in a long time. This morning I used it on the coast.
Top

I have been walking everywhere because there is too much snow to cycle, did 14 km on Tuesday, 8 km today, don't mind, that is plenty of exercise
Walking is slowest but most reliable, no tyres to p******e

You must live somewhere near Llanwrthwl or Doldowlod (two of my favourite Welsh placenames)
Entertainer, intellectual, idealist, PoB, 30120
Cycling-of course, but it is far better on a Gillott
We love safety cameras, we hate bullies
Top

rmurphy195 wrote:
No way would I get the bike out on these surfaces,

No way would I get the car out on these surfaces.
When the pestilence strikes from the East, go far and breathe the cold air deeply. Ignore the sage, stay not indoors. Ho Ri Zon 12th Century Chinese philosopher
Top

Tuesday's commute in to work was in a joy, the towpath that forms most of my commute is virtually traffic free. There are potholes hiding under the snow but I know they're there and I wasn't going fast enough for the unexpected ones to be an issue. Coming home was not quite so simple, although as the office closed early I was able to make the journey in daylight. Some icy ruts to contend with on the roads which made me rather nervy even with studded tyres. I chose the quietest climb back home, totally ungritted but still a good choice.

Milepost on the Narnian Cycle Network

Wednesday was a more challenging experience. Going in to work cars climbing the first hill I was going down were wheelspinning and even giving up and turning around. I had issues with crushed and rutted ice invisible beneath fresh snow. The office stayed open all day so the return was in dusk and darkness. It was also eastbound straight into the wind blowing off of the Thames bringing freshly falling and drifting snow. Oddly the ride home felt warmer than the ride out. For the final climb I chose a different route, somewhat slushy from the greater volume of motor traffic. It was probably a good choice as the quieter road from the previous day was under a few feet of drifted snow this morning.

No work today, I've stayed in the warm. Tomorrow sees a trip to the dentist and I need to go into town for some shopping. Undecided whether I'll walk or cycle, about four miles each way.
He's got Bette Davis knees.
Top

Left work early cause of the bad weather and rode home in the snow on the same 25c I've used for the last few years but after dropping the bike twice within 100yards of home I fitted the studded tyres tonight.
Tried riding in the tyre tracks but found them too narrow and resorted to riding in the fresh snow where there were no tyre tracks and had no major problems. I was stopped at a red light behind a car and left it behind when the driver tried pulling away in first gear when they should have used second gear as the use of first gear caused wheel spin, also passed a motorcyclist skiing up the road at 6mph struggling for traction and balance.
My Youtube library.
Top

We moved there in '61(?) from Standish.
Robin House was originally a shop with the front door and shop front on Highmoor Lane. The place was owned by my dad's mother. When we bought it, the people running the shop had wanted to retire, so it all fitted in well. Mum and Dad had internal walls knocked down and a modern kitchen installed. Both front and back doors were onto Robin Hood Lane, so we had an address change from 2, Highmoor Lane, to Robin House, Robin Hood Lane. This was in the days before postcodes of course.

I left Lancashire (Blackburn) when I was 8 and gradually moved down the country (Burton/Leicester/Southend/Cornwall). I've now lived in Cornwall for 13years and don't plan on moving.
Top

Fossala
It would've been cheaper to buy a fat unicycle

Well the trip to the dentist was a little easier than expected. Only the minor residential roads around home presented any trouble, compacted snow and ice.
Parked up outside the dentist I forgot to cover the saddle. The freezing rain had turned the Nidd into a Calder, fortunately I noticed the unusual texture before I sat down and scraped the layer of ice off. The bar tape had similarly iced over, nothing I could do about that.

Down to the shops and then back onto minor residential roads. Very icy, studded tyres proved their worth once again.

This is the photo I thought I would never see - snow in Looe (the first in about ten years): 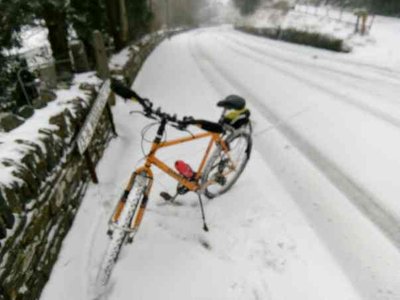 And yes the road to Polperro was easy to cycle up and down - on a bike!
When the pestilence strikes from the East, go far and breathe the cold air deeply. Ignore the sage, stay not indoors. Ho Ri Zon 12th Century Chinese philosopher
Top
Post Reply
65 posts