Specific board for this popular undertaking.
Post Reply
35 posts

Enjoy your trip, let us all know how you got on please!
Top

Thanks for the good wishes!

First impression is be aware you are staying at Abington on 575 not Abingdon.
You can take a different route through Penrith to avoid a climb but you’ve probably chose that for simplicity.
Your route around Kendal is awful , horrible bit of road to cycle on. Consider Sedgwick, Natland.
Whatever I am, wherever I am, this is me. This is my life

Thanks v much for the advice.

Good luck , enjoy the ride , hope the weathers kind for you !
Top 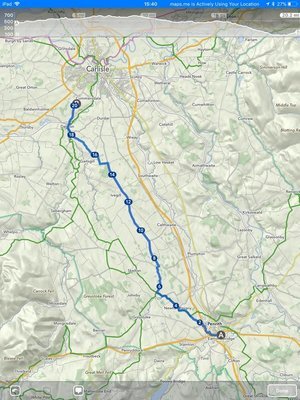 All mileages as per your route.
At mile 318 we (Wimps) are going through Shrewsbury to A528, then to Wem & through Whitchurch to pickup A49 at 343.5 M.
The A49 is a major road and carries a fare bit of traffic and lorries. It's worth a detour just to get away from it for a while.
Obviously you don't want any extra climbing or miles.
At mile 367 you seem to have a detour so wonder why not use the more direct route on the A533?
At mile 413 the route goes back on itself and the A59 up to this point is not very nice.
At mile 439 that is the wrong bridge as against the traffic.

The previous bridge is the correct one when going north.
Alternatively, at the rear of Sainsbury's, there is a cycle track /Millennium bridge that is better to take.
Personally - Just after mile 450 I would take left to Holme - Ackenthwaite - Hincaster - Sedgewick - Natland into Kendal. Much more pleasant than A65. (Although if you do take the A65 then stay on it into Kendal.)
See:- https://ridewithgps.com/routes/27068485
You'll never know if you don't try it.
Top

I guess you are now very busily preparing for the off. So follow your route and enjoy the ride. A further look and I see many aspects of your route which I personally would have altered but your requirements might be a lot different to mine. We don’t know your priorities I don’t know how much time and research you’ve put into it and why you’ve decided on some choices.
You don’t want to know I’ve just looked at your route north of Abington and through Glasgow. When you get there and your nose tells you different to your gps then maybe question your gps. Especially when you see the cycleway beside the Clyde it might look a lot more attractive than battling around some of the roads you’ve chosen.
Good luck and as you come through my patch on the 28th I’ll keep a look out.
Whatever I am, wherever I am, this is me. This is my life

All great advice! Thanks very much both of you.

i have a 5 hour train journey to Penzance tomorrow so will study your advice and make tweaks.
Top

I reckon I passed James today ( I was in car

) I’d guess he’ll be settled in at Abington by 6pm.
Whatever I am, wherever I am, this is me. This is my life

Entertainer, idealist, intellectual, PoB, 30120
Cycling-of course, but it is far better on a Gillott
We love safety cameras, we hate bullies
Top

Hi, yes you must have! I arrived in Abbington at 6.45. Bit slow on the last hill up here - struggling today with some stiffness.

Will try to follow my nose as you suggest tomorrow. Particularly as I’m going 6 miles less to Tyndrum instead of Bridge of Orchy. More options for accommodation.
Top

Cycleruk thx for the tips. I haven’t followed my planned route all that much. I used G Maps a lot for better options. Will post what I actually did once back.
Top
Post Reply
35 posts