For discussions about bikes and equipment.
Post Reply
14 posts • Page 1 of 1

Yesterday, I was riding happily along when I heard an odd rattle and felt some resistance. Checks revealed that 4 chainring bolts had ejected themselves at some point and my inner chainring was hanging on by one bolt. The chainset is an FSA Tempo Adventure 46/30 double and I only installed it 3 months ago. I have been doing a lot of offroading recently and had a slow motion crash the other day which likely contributed to the bolts falling out. They're not something I regularly check. They could have gone at any time I suppose.

The threads on the inside of the spider now do not line up with the bolt holes on the chainring. I can get 2 bolts in but all of the other threads are offset by a couple of mm and the bolt won't align with the thread. I have tried every rotational permutation and according to the documentation it's correctly aligned. Photo attached to explain. 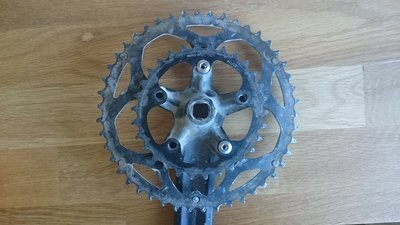 Could I have distorted the chainring? It's not obviously bent or out of shape and seems to spin and ride OK. 2 bolts isn't ideal I know!

Any ideas on what I'm doing wrong or what I can do to rectify this? Obtaining a replacement 80bcd 5 arm 30 tooth ring doesn't appear to be easy...

Thanks in advance.
Top

The chainrings could have been distorted by the heat or by pedalling forces when they were only held by two bolts
Entertainer, juvenile, curmudgeon, PoB, 30120
Cycling-of course, but it is far better on a Gillott
We love safety cameras, we hate bullies
Top

Given that it has a very unusual BCD, it may be a new chainset job. Maybe pick one with the more common 74mm inside BCD so that the inner can be easily replaced when it wears. And check the bolts after a short period of use to make sure they are all still done up properly.
Top

Some judicious filing to carefully enlarge the bolt holes in the chainring should allow the bolts to engage with the threads again.

The chainring will still be distorted, which may or may not be noticeable in use.
Top

Almost certainly you can make the chainring round enough to fit again, if you want.
I would suggest that if you use two pieces of wood (soft enough to embed the chainring teeth into so that you can apply a fair load radially) and then measure across nearly opposite chainring bolt holes, you may well be able to identify how it is distorted and then make it round again by careful use of the hammer.

Note that if the bolt heads sit in counterbored holes, this will limit how much filing can be done before the bolt heads don't fit properly any more.

BTW I agree with a post above, I think the 'FSA tempo adventure' is 110/80 BCD, and that 80mm BCD chainrings can be had without too much difficulty. [edit; you can buy the same chainset but the chainrings are not so easy.... a 110/74 one would be a much better idea...]

Just a thought - when you tried refitting, did you fully tighten the two bolts before trying the next bolt? Would they all fit if you just engaged the thread rather than immediately tightening down? I've had this on a brake rotor for example. Might save £20 and or some cussing!
Convention? what's that then?
Airnimal Chameleon touring, Orbit Pro hack, Orbit Photon audax, Focus Mares AX tour, Peugeot Carbon sportive, Owen Blower vintage race - all running Tulio's finest!
Top

Yes, just fit the bolts loosely and tighten them bit by bit in turn diagonally
And check them regularly, in case they fall out again

Thanks for all the replies.

I've tried gradually doing up the bolts, with no success.

The Cycletourist chainring is 8 speed but I'm running 10 speed. Research tells me this isn't a problem. But it's silver...

I'll have a go with a hammer and a file tomorrow and get the Cycletourist if it doesn't work.

You've all been helpful, as ever. I'll hopefully remember to check the bolts occasionally from now.
Top

I wouldn't go for the cyclotourist offering, it is for a 6 arm spider, yours is 5!! Don't think that's going to fit.
Top

SimonCelsa wrote:I wouldn't go for the cyclotourist offering, it is for a 6 arm spider, yours is 5!! Don't think that's going to fit.

GPWM I've had another look and I have changed my mind; whilst the chainset is listed (but not in stock....

the correct chainrings for the inner position are nowhere to be found. Maybe they can be ordered from FSA; the chainset design is only about eighteen months old.

Write to FSA and complain about them deciding to invent a new, unobtainable, chainring size rather than using the common 74 size.
There's a chance they might send you a replacement
Top

So after riding some 20 miles, with the ring only secured by 2 bolts, it has changed shape sufficiently so that I can get 4 out of 5 bolts back in. Strange stuff. Will borrow a needle file to get the remaining bolt in.

I have written to FSA UK asking where to obtain a replacement.

You may be able to use a short lever to prise inner ring into a position to enable the last bolt to be inserted. A length of broom handle or similar may suffice.