I live in the BEST place for cycling. Milton Keynes The Redways system is Great never need to go near any roads really HOWEVER, they are rather badly maintained so everyone goes on the roads the really FAST roads :O except me but aside from being lumpy and bumpy they are actually Brilliant cycling system

I grew up nearby. The redways were lovely flat. I've noticed on recent drives through an increase in road bike riders on the grid roads, so maybe bad maintenance is why.

If so, MK Council deserve serious abuse for wasting this resource they inherited from CNT and MKDC.
MJR, mostly pedalling 3-speed roadsters. KL+West Norfolk BUG incl social easy rides http://www.klwnbug.co.uk
All the above is CC-By-SA and no other implied copyright license to Cycle magazine.
Top

I've cycled through MK on many an occasion on my way to Bedford and back to Daughter2.
Never seen the town as I just ride through on the main roads.

This is the last time I was there on my way west. I have gone on Monk's Way before. 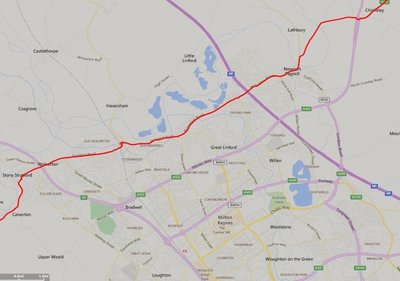 I did a route through MK (in both directions) which went:

I would be very interested to hear if anyone at MK knows of a route that could (or could in the future) be classified as a cycle super-highway that went through MK in an E-W ish direction. Main attributes:

Mick F wrote:I've cycled through MK on many an occasion on my way to Bedford and back to Daughter2.
Never seen the town as I just ride through on the main roads.

This is the last time I was there on my way west. I have gone on Monk's Way before.Milton Keynes.jpg

If you'd turned left into Station Road in Newport Pagnell, you'd have gone along the Newport Nobby rail trail which used to and avoided loads of annoying junctions through the Bradwells and arrived near the centre of Wolverton by its station for just 0.2miles longer, or less if you took a different route out west.

atlas_shrugged wrote:I would be very interested to hear if anyone at MK knows of a route that could (or could in the future) be classified as a cycle super-highway that went through MK in an E-W ish direction. Main attributes:

I doubt there is one. The reason is that the original redways were fitted in around the roads and houses which took priority, so aren't direct, while the 1990s grid redways are direct but were done on the cheap so give way to most turnings off the grid roads and some grid-grid junctions.

I wouldn't be too harsh on the planners who put in the original redways because they were doing that in the 1960s, before the Netherlands even, but for the 1990s cheapskate routes, the gutting of the New Towns authorities by Thatcher and Major don't get the criticism they deserve, while MK Council has never removed the crossings or even changed the priorities in favour of cycling since they took over.
MJR, mostly pedalling 3-speed roadsters. KL+West Norfolk BUG incl social easy rides http://www.klwnbug.co.uk
All the above is CC-By-SA and no other implied copyright license to Cycle magazine.
Top

The latest Redway map (2018) for the first time identifies Redway Super Routes. These go horizontally and vertically (as the grid roads) rather than diagonally. A Redway map is really essential and even then the links to and from the surrounding countryside are not shown very clearly. Local cyclists know these routes but they are complicated. Give me your details and I will put a Redway map in the post.
Top

That's interesting pga. Do you know if they've done any work on the grid redways to make them Super?

Where can I get the map from in MK? I'll be passing through soon. Central Library? Council office? TIC somewhere?
MJR, mostly pedalling 3-speed roadsters. KL+West Norfolk BUG incl social easy rides http://www.klwnbug.co.uk
All the above is CC-By-SA and no other implied copyright license to Cycle magazine.
Top

I live near Telford , also a newtown , but a little different from MK in that half of it pre dates the new town and its not flat , hence we do not have a grid system . More of a series of communities with ring roads around each and all of the original town centres were pedestrianised and bypassed, Its a sad story really because they did build quite a few cycle paths , but in general they are not sign posted and not maintained, with the exception of one old railway line named the Silkin Way which is about 5 miles long and travels to the town centre from the South , there is little to the North, Nearby Shrewsbury which got a cycling city grant is probably better mainly becasue again two old railway lines and the river are cycle paths and they are actually sign posted . How much do sign posts cost?
Top

The Super Redways have received no special treatment. NCN route 51 now diverted away from the City Centre.
We don't cyclists getting in the way of our car driving shoppers do we? Of course none of us were consulted. Were Sustrans?

The Gilligan Report on cycling in Cambridge/MK/Oxford is very radical proposing cycling czars for each city and also paid workers in local campaigning cycling groups to monitor local authority planning and transport policies as they affect cycling. Far too radical I suspect for all three cities, but compulsory reading for all who care for the future of cycling in all three cities and points between. We are in changing times - air pollution awareness is increasing as are other problems. We cannot carry on as usual although Mrs May has not got the message, eg her further delay of the fuel tax.

By the way the only way to get the Report is to download it - hard copies not available for MK Cycling UK- such is our democracy. Have all MK Councillors received a hard copy to study at leisure? Sorry I sound so cynical but I have been around politics far too long not to think otherwise.
Top

Don't complaint too loudly. As flawed as it is the network is an idyllic dream land compared to the cycling infrastructure in most towns. Some of it is poositively lovely.
https://themediocrecyclist.home.blog
Self employed MIAS L5.B Instructor.
Warwickshire Lowland Rescue Bike lead.
IPMBA certified member.
Cyctech C2 hammer and crowbar bodger.
Lapsed CTC Ride Leader, amateur hour stuff from the fun old days.
Top

This fits with my experience as an occasional visitor. MK is pretty much the far end of a day ride for me. When I have visited, I've tended to ride on the roads.

First time I went, I tried to use the Redways to get across town from the south east to Phil Corley's in the north west. It was hopeless. The paths in themselves were OK, but all the signs were to local "villages" that I'd never heard of, and I was getting dumped in local shopping centres and play parks with no onward route. Trying to follow paths alongside the V and H roads helped a bit, but you could never guarantee that the path wouldn't veer off to take you alongside some particularly pretty lake, and then go on to somewhere you'd no idea of.

Planning officers should be compelled to set up exchange partnerships with colleagues in towns they have never visited, and go and use their paths to visit places that are not in the relevant town centres. If they can't find them, the host officer gets fired

Mind you, most road signs would fail that test

If MK set up major routes and do it well, that will be a great step forward. The way that people really navigate across town is to look for signs to Aylesbury or whatever, until they get close. Same as, when driving to Rugby from Watford, you look for signs to The North, not for signs to Kings Langley! So major routes, clearly marked with "long-distance" destinations, are essential for a navigable system.

Stevenage, which is much closer to home, has the same problem on a smaller scale. The older paths, broadly in the industrial area, are quite well built, except for some line-of-sight problems in a few areas. However, it took me years to find my way around, and I still have to think about the town centre, which is approached by a few secret paths, and obstructs cross-town travel quite badly. The outer paths are newer, and were laid by people who didn't really get it, so they aren't that useful.
Top

I was there last week. It makes me weep to see that fabulous inheritance from MKDC and CNT being left to rot. It still goes reasonably close to almost everywhere, but that's its main distinguisher now. The rough patchwork surfaces, intermittent signs and encroaching vegetation is just like so many former cycling cities.
MJR, mostly pedalling 3-speed roadsters. KL+West Norfolk BUG incl social easy rides http://www.klwnbug.co.uk
All the above is CC-By-SA and no other implied copyright license to Cycle magazine.
Top
Post Reply
12 posts • Page 1 of 1