Use this board for general non-cycling-related chat, or to introduce yourself to the forum.
Post Reply
135 posts

you would have thought they could have found some yellow vests in French?

or maybe it some brexit-eers stirring it over the water? 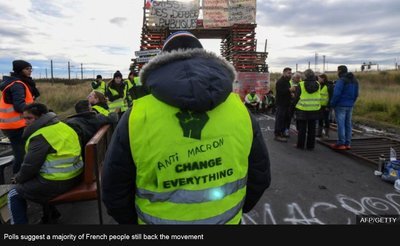 And its pretty evident journalistic twaddle like this should always be ignored.

Though to be fair if there wasn't this type of fancy opinion piece we'd have far fewer topics on Tea Shop!
Top

The Grauniad has an interesting article about the protests that started in la France profonde, the yellow vests represent an obligation by the state, there have been like protests in many other countries including the French-speaking part of Belgium
In Germany both the far left and the far right organised yellow-jersey protests

Cycling-of course, but it is far better in a gilet

Entertainer, idealist, intellectual, PoB, 30120
Cycling-of course, but it is far better on a Gillott
We love safety cameras, we hate bullies
Top

The mass protests in Barcelona today are also echoing the sentiments of the GJ's. In fact yellow is the Catalan national colour so they're quids in already! There are several observers and advisors from the French GJ today in Barcelona, and watching some of the video footage the police violence and brutality far outweighs anything seen by the protestor. I've got friends in the city and they say they'll be out tonight for the 6 o'clock protest along with most everyone in their street. Very few people are at work today.

Some political commentators say a Europe wide revolution is definitely on the cards. Its been a long time coming ('68). There's such a groundswell of antipathy towards the current administration in France that its only the temporary respite of Xmas and the festivities keeping them one more battle on the barricades away from being ousted from power.

You never know, if Brexit rolls into an expected cocked hat, and no deal cliff fall is looming you might see the GJ on the streets of Britain. The British government were terrified it might spread to the UK in '68 and I don't think the deployment of 3500 troops on the streets in 2019 is entirely coincidental. The phrase 'perfect storm ' springs to mind.

We live in interesting times.

Just for a bit of balance in the mainstream media reportage, heres a video of the real protest in France. You'll notice the protestors quite justified response to sustained provocation and brutal attacks from the police, including (but not limited to) water cannon, full on baton charge, punching, kicking, CS gas, pepper spray, stun grenades and dragging by the hair along the street.

Unfortunately all this has so far achieved is the entrenchment of the movement and a determination to kick start it all again after Christmas. One more weekend on the barricades and they will get rid of Macron and his globalist ambitions for France. When public order breaks down and the confidence ebbs to maintain it any government is finished.

well maybe solved the rat problem in Paris, all that tear gas?
Top

so what? thats hardly old. And the sheer length of it is astonishing? I hadnt seen it before and find it all surprising, the cops seemed so in ept
Top

What's a month got to do with it? I'm simply providing balance to the skewed mainstream media.

The police are actively provoking peaceful protestors as the above footage shows. Macron is history by February. With any luck the movement will spread to these shores. Though I doubt the British public have the same balls asr the French do when it comes to standing up to a corrupt, globalist agenda government. And they are all the poorer for it.

In the US they have enshrined the constitution the right to bear arms against a corrupt and oppressive government. They took their lead from the French...
Top

Fortunately or unfortunately the British are carnivorous sheep, like the Germans

The French have a more passionate way, they block the TdF too, but what have such protests really achieved?

@Canuk
Your view (hope?) that MacRon will go, do others seriously share it, what do the media think? I thought he saved us from LePen

Who might take over if he goes? La France insoumise? New elections? A coalition or GNU, government of national unity?

reohn2 wrote:I'm not arguing against or for the protest,only noting that protests tend to reach a crescendo then tail off.
Is this one any different or will or persist until change is wrought?

The protestors are still manning the barricades and the roundabouts all over France even though Xmas is upon us. The French take 'les fetes' very seriously. I expect an absolute fury of protest come the first Saturday next year.

I'm not quite old enough to remember the 'dans le rue' protest of 1968, but that was by an order of magnitude more violent and serious than what we've seen so far. Changed politics and policy in France for a generation.

Mark my words, when the rule of law fails (and many police are with the Gilet Jaune), then your man McRon is but one weekend away from being ousted.
Last edited by Canuk on 23 Dec 2018, 2:04pm, edited 2 times in total.
Top

Cyril Haearn wrote:Fortunately or unfortunately the British are carnivorous sheep, like the Germans

The French have a more passionate way, they block the TdF too, but what have such protests really achieved?

@Canuk
Your view (hope?) that MacRon will go, do others seriously share it, what do the media think? I thought he saved us from LePen

Who might take over if he goes? La France insoumise? New elections? A coalition or GNU, government of national unity?

I'm pretty certain a National coalition is on the cards. If Paris goes into flames and 300,000 on he streets just one more time McRon is done for. The groundswell of antipathy towards this administration is incredible. Everyone, everywhere is talking about it. But the French don't just like to talk, they like to revolt.

Yes, the people, the plebes are revolting!
Top

Plus One for Canuk, our correspondent on the ground
Entertainer, idealist, intellectual, PoB, 30120
Cycling-of course, but it is far better on a Gillott
We love safety cameras, we hate bullies
Top

I don't make any pretentions to the reasoning behind the GJ, but it seems obvious like the movement of 68 they are intent on overthrowing an administration that no longer represents the will of the people.