For all discussions about this "lively" subject. All topics that are substantially about helmet usage will be moved here.
Post Reply
46 posts

Lance Dopestrong wrote:When I were a lad I climbed trees, played unsupervised with a bow and arrow, and used to entertain myself by sticking bullets in my Dad's vice and lighting them off with a hammer (ammo from the war and the likes was still in circulation-a-plenty back then), all before I was double digit age. I also had some horrific bike accidents and managed to damage just about every part of my body...other than my head!

How we survived to become adults without cycle helmets is a mystery to me.

Ha ha - here is an undeniable truth from vast seas of evidence held in the memories of most from their time as a small boy or girl learning proprioception. I too banged and scraped everytrhing except my head when riding the bicycle.

Why, then, have the safe-spacers not insisted we all wear full body armour when cycling? I often feel a twinge in the sacroilliac joint that rekindles my yearning for a protector of that sensitive area from the dangers of sliding sideways on them diesel slicks left by the careless on various badly-cambered corners. These days the slightest whiff of diesel when I'm on the bike induces an immediate paranoia.

How many and which bones have CUK forumators broke in their yoof? I can't be sure but I believe mine reached a dozen bones - from fingers to toes - before I came to grips with body-steering about the world. Even the head got a concussion (but no break) from ice-skating as a novice + an evil push from behind by an immediately ex (well, later when I woke up) girlfriend! Why didn't they issue a helmet with the boots?

Cugel, too brittle for falling over now.
Top

Anecdotal data is pointless from a research point but it's fun to share stories.

Was going down a hill and a car pulled out Infront of me. Broke my clavicle (surgery with plate), left wrist (cast), right middle finger (surgery, pins) and three broken ribs. Head fine other than biting down on the inside of my mouth resulting in lots of blood and scaring inside my mouth.

Came off three times due to surface conditions. Each time just scrapes on elbows and knees.

One time was I going down a hill on a dark foggy morning. Hit Harris fencing bending it around me, had to climb out of it. Broken finger. Yet again no head injury. Picture included. 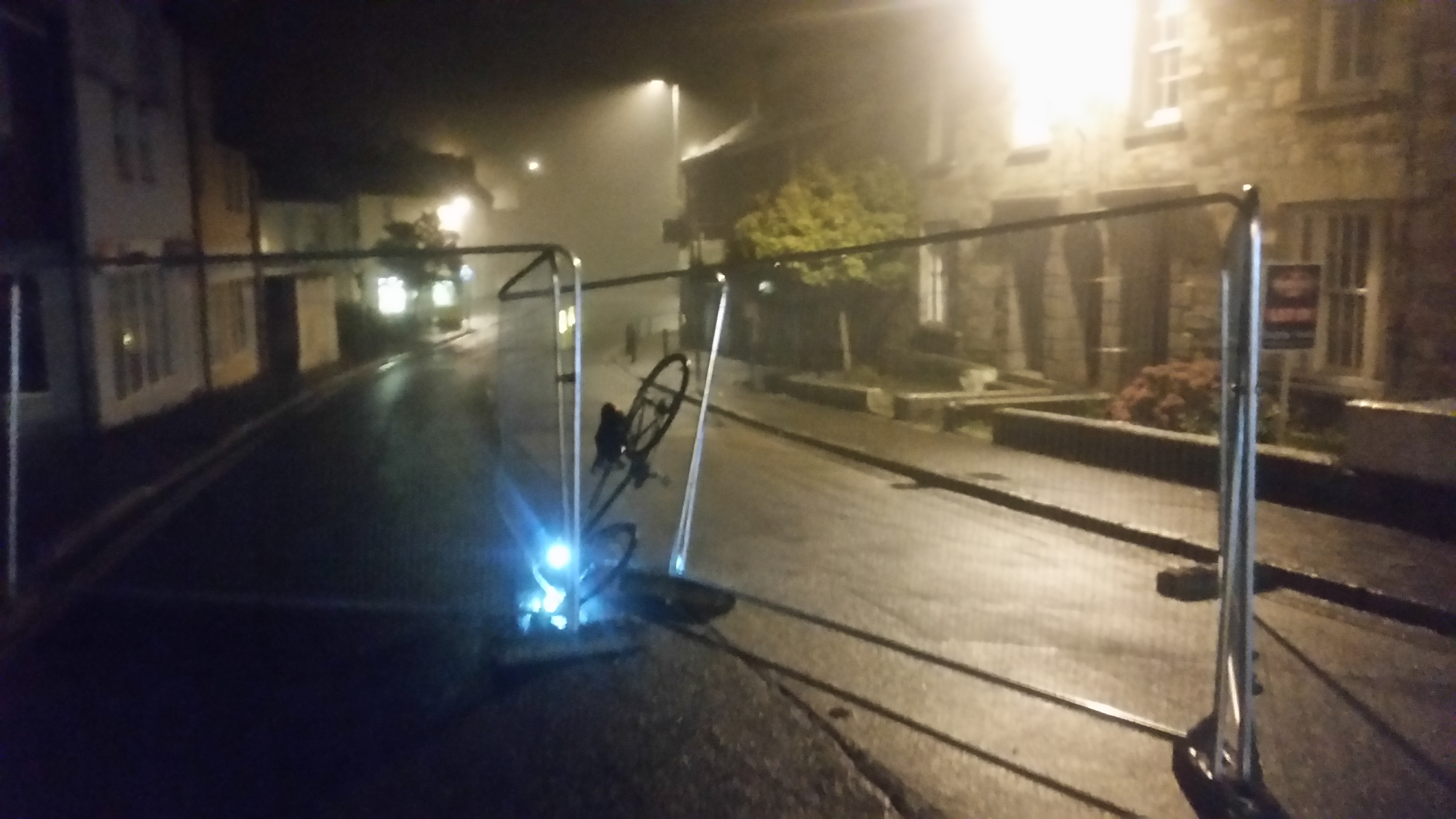 You can see how hard I hit the fence as I was on the left of the road and have pushed it right around 8ft and back the same!
Top

I've been watching some World Cup cricket games. Most of the time, only 3 of the 15 people on pitch are wearing helmets.

Have you seen how fast the ball travels, and how hard it is?? I'd want an "I've been brave" sticker just for fielding in slip!
Top

The utility cyclist wrote:As I said a while back, the website was festooned with hi-vis/helmets and yet some insist that I'm being oversensitive when I say that CUK are part of the problem when they promote helmets in this way by using images way too often showing all the groups we want to encourage into cycling wearing them. For every one photo sans helmets, there are plenty more with and each one with is targeted at women, children, new people into cycling. It's sickening and yet CUK won't admit or simply don't see the damage they are doing.

The reality on the ground is that much cycle training, down to and including balance bikes in benign places, has a lot of helmets. This isn't because CUK are pushing them, but because those involved (carers, schools, LAs) think that's the right thing to do, and that is in spite of what CUK say rather than because of what they do.

And it is natural for photographs to get taken of these things because people want to publicise what they're doing. So CUK can refuse to show their own members riding as they tend to ride, or they can reflect reality.

Bikeability Scotland has no helmet requirement. the National Standards for Cycle Training which Bikeability Scotland aims to deliver have no helmet requirement. If I try and teach Bikeability Scotland with no helmet there is no local authority in the country that is willing to let me. Back when I did I had complaints from parents that I was setting a bad example. If you insist on a helmet free environment you won't get anywhere. If you don't insist on that then you are entirely likely to get a lot of helmets, because the cultural impact of helmets in the UK amongst carers keen on cycle training is far more powerful than CUKs helmet briefing. So you can do it in a sub-optimal way, or you can not do it at all.

For the umpteenth time, it's not as black and white as you persist in making it.

Patrickpioneer wrote:I few days ago I was passing two ladies and a group of children, all in HI VIZ and helmets. Thinking they where doing some cycle training I slowed to say hello, they where training to cross the road not a bike in sight. Never seen this before is it common?

They might have had some form of balance or stability problem. It's common for kids with eg epilepsy to be given helmets.
Top

I have the same problem. I can't get insurance to teach unless my delegates all wear lids. To be fair though, I also teach off road skills, defensive tactics etc, so the chances of a blow to the noggin are much higher, so in the eyes if the insurers the risk is so much the greater.
https://themediocrecyclist.home.blog
Self employed MIAS L5.B Instructor.
Warwickshire Lowland Rescue Bike lead.
IPMBA certified member.
Cyctech C2 hammer and crowbar bodger.
Lapsed CTC Ride Leader, amateur hour stuff from the fun old days.
Top

Sometimes it seems to me that there are only two varieties of cyclists left unlidded.
There are, of course, those few die hards, some of whom post here, who do not accept that they are any use, and have a case against them that they have thought about.
And there are those who don't give a tinker 's cuss for the law and any accepted ideas. I mean those who ride on the pavement, through pedestrian areas, through red lights etc, and don't bother about maintenance either. I mean the POBs.
This is by observation.
Club cyclists wear plastic.
Nice middle class greens on hybrids wear plastic.
Tourists wear plastic.
Commuters wear plastic.
Top

Something which ISN'T LAW, and also has no evidence to suggest it's "accepted ideas" apart from mass-media and those who don't ride bikes - But hey, you carry on with your blinkered view. Crikey - wish I'd not turned the computer on!
Top

Ok on club cyclists. Only a minority of the rest do here. Only crazy British tourists do. And the Americans but there are few of them.
MJR, mostly pedalling 3-speed roadsters. KL+West Norfolk BUG incl social easy rides http://www.klwnbug.co.uk
All the above is CC-By-SA and no other implied copyright license to Cycle magazine.
Top

Something which ISN'T LAW, and also has no evidence to suggest it's "accepted ideas" apart from mass-media and those who don't ride bikes - But hey, you carry on with your blinkered view. Crikey - wish I'd not turned the computer on!

I did not suggest helmets are mandatory, but that the POBs who don't wear them don't care for the law, any road law.
I would suggest most cyclists these days believe that helmets should be worn.
I wrote "by observation" because I wanted to say that this is what I observe.
Perhaps it would mollify your indignation and comfort you a little if I say that I am included in the die hards. Even if a law is enacted I will not wear a lid.
Last edited by Mike Sales on 31 May 2019, 7:29pm, edited 1 time in total.
Top

Ok on club cyclists. Only a minority of the rest do here. Only crazy British tourists do. And the Americans but there are few of them.

Not what I see.
Top

Is there any reason why folk simply don't just live and let live? Some wear helmets, believing they are beneficial whilst others take the opposite view. Why not each to their own?
John
Top

Oldjohnw wrote:Is there any reason why folk simply don't just live and let live? Some wear helmets, believing they are beneficial whilst others take the opposite view. Why not each to their own?

Indeed. When I was secretary of an informal club helmets were optional. Unfortunately my local clubs in this area mandate helmets, as so many organised rides do. I have never heard of a club or ride which banned helmets.
Top
Post Reply
46 posts