Booked Air Canada on a whim - there was no info on this forum and others offered little or no help. Anyway, I would thoroughly recommend traveling with them. At neither end did they weigh or measure my box, and I just packed my bike and camping gear in an old cardboard box I picked up, which works every time for me. You basically pay 50CAD at the airport to waive overweight and oversize baggage charges (up to 32 kg), a nice little loophole to carry loads of stuff with you basically for free. All was very streamlined - used the self service machine at Heathrow and the check in desk at Vancouver - both worked fine. I've started taking photos of my baggage since BA once lost my bike and the oversize baggage people took very unkindly to this - saying they'd 'call security on me' and refused to accept my bike whilst my camera phone was in my hand. Anyway, brief grumpy people experience aside and again this is a good airline to travel with. Amusingly on my way home I decided to ride to the airport with my box strapped to the back of my bike - it worked but the windy viaduct to the airport was quite sketchy! 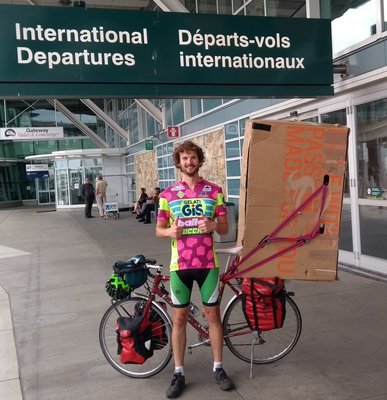 Anyway that's where the good stuff generally stopped. Vancouver has invested a lot in its cycling network and broadly it's very very good. Which is good, because the driving standards over there are probably the worst I have ever encountered - worse than the USA and Eastern Europe/Turkey/Morocco. Not agressive, but just careless. Any road would be largely terrifying with people turning right across you or not stopping at stop signs. The roads are also incredibly busy as there are relatively few of them and it's the home holiday season so there are RVs everywhere and most were driven by people clearly not used to manoeuvring large vehicles. Helmet use is mandatory in BC (although maybe 50% didn't). Mine stayed firmly on. Around Vancouver itself there's a big road cycling culture and I met many other tourers on most days. Most were pretty friendly. I did warmshowers maybe half my nights and it was relatively easy to find hosts - although disappointingly nobody in Vancouver bothered to respond to my requests. Like in the USA everybody is very friendly and welcoming - don't think I had a single negative experience with any local whilst out there. The local wildlife on the other hand... I didn't buy any bear spray but fortunately only saw one (black) who was just crossing the road and didn't seem phased by my presence. Other cyclists I met said they'd never had problems with them. The mosquitoes though we're a royal pain in the buttock and were largely present all day, every day. Stop for a tinkle and you'd see them all landing on you and I currently look like a smallpox victim with bites. The country is also incredibly hilly - I did a bit of analysis before leaving but the climbs were truly merciless in reality. Riding to Banff and back I had maybe two days of largely flat riding. Nothing above 10% but don't fall into the trap of thinking a road is flat because it follows a railway or river! Weather pretty variable too. It rained to some extent every single day although in the Penticton area it is extremely hot - this is an arid wine growing region. Food was good and I was never without access to water. Largely no wind although I obviously found a way to whinge about every ride having a 'mega headwind'. Camping is the silly US system where you have to stay in a designated spot - so I had to pay to get an RV site some evenings - but there were lots of places to stay and were all good enough. My biggest gripe though was how awful the rail trails were. They are heavily marketed at something fund to do but they are in a painful state of disrepair and I had to curtail my trip by a couple of days as the Kettle Valley Trail was literally impassable unless you had a mountain bike. The glitzy tourist board photos are sadly a long way from the actual situation which is a great shame.

Anyway, phone-written monologue over. I didn't take my photos but here are some that may hopefully be of interest: 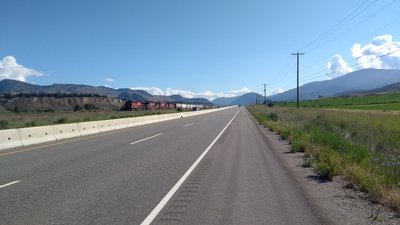 A beautiful day riding on the flat out of Kamloops. Nice, clean shoulder. Unfortunately not many roads were like this, unlike in the USA where they are more common. 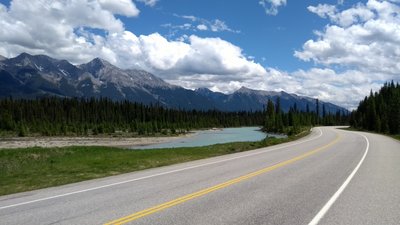 Riding through the Kootenay national park South of Lake Louise. A stunning road, it was like this for 70 miles or so. 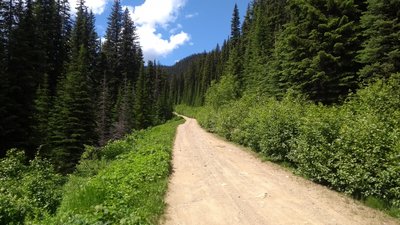 Gray's Creek Pass. Maybe 50 miles on unsurfaced forestry track. A nightmare on a road bike but I gave this a go deliberately because I knew it would be tough. Technically challenging although the website makes it sound worse than it is. 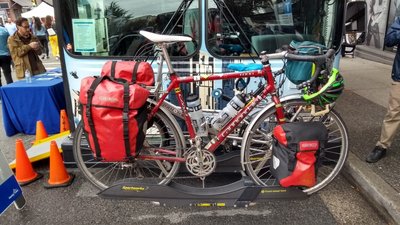 Had a go on one of those bus bike carriers they have over there. Never seen one outside of North America before... but it managed to fit my tourer without much problem!

Anyway, in summary Canada was a little disappointing. The weather is very 'English' and the roads are tough. It's also very expensive. If you're considering it I'd try and persuade you to go to the USA instead - there's a bit more variety and the cycling infrastructure is a little bit better.
Top

Interesting as we rode across Canada 2 summers ago and the only province that had really bad drivers was Ontario.
So how far did you ride with that box on your bike?
Top

Only ten miles from the hostel to the airport. Not meaning to be cynical or anything but the bike lanes were a lot better than those in London. Actually seemed to be designed for... bikes.
Top

Crossed Canada last year, and as has been said, Ontario was the worst experience, as it took a few weeks to cross it had to be. Some of it was great. tho new Brunswick gives it a a good go too.! Crap drivers mainly. Overall I loved it. As you say different from USA. Not so bike friendly.
Top

I am from Summerland just out of Pentiction. Sorry to have missed you, when you were on tour. I I’m not on warm showers but I frequently host touring cyclists and would have been happy to have you. I have read your comments on the rail trail conditions and couldn’t agree more.

Thanks
Jed Maddock
Summerland BC
Top

Thanks so much for this. I'm currently in California, heading north to fly Vancouver to England this October. I haven't booked my flight yet, so if I'm reading correctly, you say I just buy a normal seat/air ticket, then pay $50 when I arrive at the airport with a bicycle packed in a bike box?
Top

Jedmaddock wrote:I am from Summerland just out of Pentiction. Sorry to have missed you, when you were on tour. I I’m not on warm showers but I frequently host touring cyclists and would have been happy to have you. I have read your comments on the rail trail conditions and couldn’t agree more.

Thanks
Jed Maddock
Summerland BC

Please do! All the locals I met out there had a whinge too. I've done a lot of the America's rail trails and they've all been fab - so naturally I was very disappointed. I have no idea how your tourist board can even get away with marketing that they are rideable.
Top
Post Reply
7 posts • Page 1 of 1