Use this board for general non-cycling-related chat, or to introduce yourself to the forum.
Post Reply
327 posts

mercalia wrote:Sir David said last year: “If you’re a film cameraman you are trained, as it were, to be the observer, a non-participant. That’s very important.”

It's that attitude that is morally questionable?

Scientists, observers and the folks who bring their work to the public have learned through previous errors to avoid interference.

It has nothing to do with morality. Watching an animal get run over by car when it could have been prevented is morally questionable. Watching one get caught by a lion is not.

Its every thing to do with morality. Maybe in my original case since nothing could be done to save the antelope, the right thing would be to NOT film it and certainly not to show it for entertainment - The BBC made a profit I assume form the films? I cannt say I learnt much from watching that part

Once you start to observe the natural cycle as you put it, it ceases to be the same natural cycle before you started observing it. You cannt justify non action by reference to genetics as we dont put crippled or defective or moronic humans out to die like the Spartins did etc Might be a good idea but that would be eugenics.

As far as I can see there would be nothing to gain from not helping the turtles even if they hadnt been upset by human interventions. Sir Davids attitude is a throwback to the time when we used to think we were special and not part of nature, wrapped up in bogus science. The detached observer is a fiction

There was another case that the BBC crew went against SIrs dictums. It was filiming penquins. This large group had got trapped down a snow gully and try as much as they could they couldnt get out as they kept on sliding down the slippery snowy slope. It was certain death to stay where they were. SO the camera crew cut steps in the snow slope and the penquins one by one managed to get out of their certain deadly situation.Sir David would have left them there to perish I assume as they clearly have poor genes to have got in the situation in the first place.
Top

mercalia wrote:Its every thing to do with morality. Maybe in my original case since nothing could be done to save the antelope, the right thing would be to NOT film it and certainly not to show it for entertainment - The BBC made a profit I assume form the films?

That's a bizarre conclusion.
Exposure to nature is to my mind a fairly important thing, without exposure we'd be far more ignorant of the harm we as humans do - and we're ignorant enough as is.

The turtle episode showed us both how amazing nature is and how vulnerable it is to our meddling, that series was responsible for a decent shift in attitudes to plastic.

If you don't like nature programs and the fact they portray such things why watch them?
They're not meant to be an easy watch, but they are fascinating.

Sir Davids attitude is a throwback to the time when we used to think we were special and not part of nature, wrapped up in bogus science

I'd say exactly the opposite, we've gone from thinking we're special and we should interfere to realising that our interference is by no means a good thing.

As for bogus science - care to give an example of why you think it's bogus?

How do you work out that observing something changes it? This is nature, not quantum physics.

And the penguin thing - had there been nobody filming they'd have died anyway. You appreciate billions of creatures are dying right now in preventable ways too!

Just out of interest do you know how many chickens, pigs, cows etc live pretty appalling lives and die fairly nasty deaths suffocating in CO2, having their throats cut or being smacked on the back of the head?
I find it bizarre that a handful of creatures in a natural environment struggling to survive evoke such response when the really ugly stuff is hiding in plain sight and we try our best to ignore it.
Top

mercalia wrote:
Once you start to observe the natural cycle as you put it, it ceases to be the same natural cycle before you started observing it. You cannt justify non action by reference to genetics as we dont put crippled or defective humans out to die like the Spartins did etc Might be a good idea but that would be eugenics.

While it is true that observing the natural cycle may, by itself, influence it, if we start interfering, we have to decide which animals get to live, and which don't. That is far more disturbance to the natural cycle than merely observing. It is also morally questionable; more so, in my opinion than merely saving the deer from the lion.

Putting people out to die is the same sort of thing, only worse.
“In some ways, it is easier to be a dissident, for then one is without responsibility.”
― Nelson Mandela, Long Walk to Freedom
Top

In the social sciences there are various types of observation incl the type that David Attenborough advocates as the only one that should be adhered to. Naive at best. The examples of human participation in other animal lives that I mentioned shows that others are possible and if rejected tarnish our humanity. No need to try and justify them due to a nagging David Attenborough in the background. Even doing nothing is doing something. deciding not to interfere. so the "natural cycle" has been changed, to include the observers. I, a Martian, might want to study David Attenborough's group studying other animals., since they are all the same to me.

On another matter a Seagull got an unintended make over

Well every one will see him coming 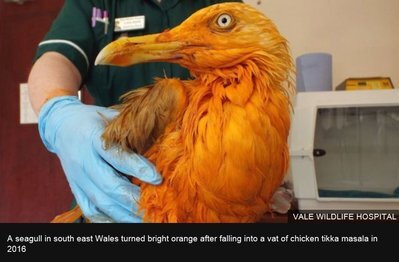 brynpoeth wrote:+1, the tortoise will outlive them all

Any chance of a picture?
Diolch

I am keen to put out images and possibly video of Charlie getting about with his new prosthesis because it is neater and more ergonomic that any other tortoise+wheel images I've seen. The wheel itself is a tiny plastic castor wheel, and the axle is a length of SKS stainless steel stay for a mudguard, which is just about bendable by me but not by the tortoise. The stay attaches to the underside of his shell by epoxy putty over a flat spiral of the axle material. He sometimes uses the wheel as if it were a leg, lifting it off the ground. But on smooth tiles he seems to intuitively know that he can roll it very easily and he keeps it in contact with the ground.

So I'll provide images at some point.

Bump!
We should be thinking of the birds in the snow too 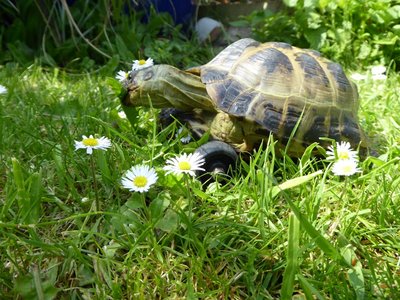 This is a pic of Charlie the tortoise who lost a leg after a rat attempted to eat him. Neighbours were feeding the birds carelessly and allowing a lot of seed to get on the floor, which is basically a rat magnet. I'm not saying don't feed the birds, but suggesting people take reasonable measures to minimise spill.

Charlie gets on fine with his wheel. He gets around the garden surprisingly quickly. The wheel is from a tiny caster, the axle is from a spare stainless steel SKS mudguard stay that spirals beneath the carapace, and it is fixed with epoxy putty. Because the wheel has no tyre he can turn on the spot with the wheel sliding sideways.
Top

Hi,
How many can you count, sparrow's. 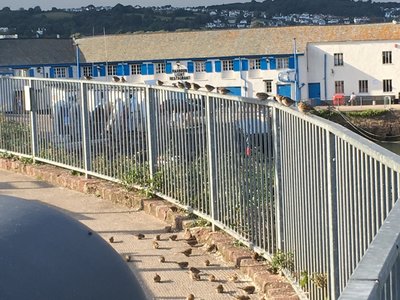 what ever they are they are very fat?
Top

Hi,
Well they might be fat, they are sparrows of course.
Down the beach near takeaways Holiday seaside town Paignton.
So many of them in several locations, near takeaways again, Had to sit and watch them as there are so many in one place, someone young calling to be fed, they always look bigger than their adults the feathers pluffed up.

They were pecking on the ground Including the concrete,
Having dust baths And frolicking around, Interesting and unusual go figure.
They were hiding in the bushes also. 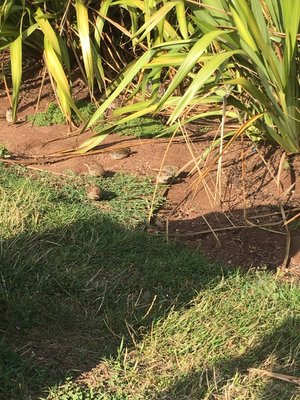 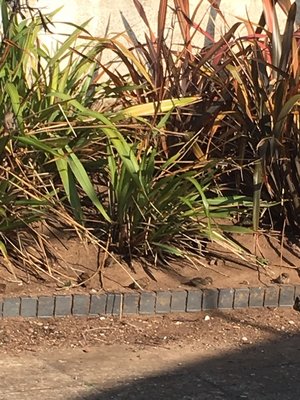 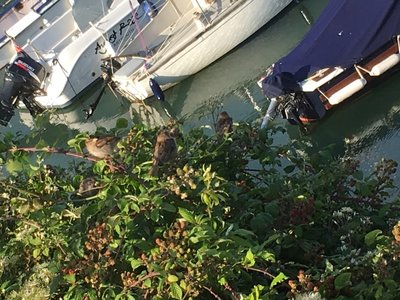 you must have all of them there as I dont have any , just lots of the tit family, blue/great/long tailed
Top

wow just saw a kestrel or some other bird of prey try and get one of my blue tits at the feeder. This is London. didnt know there were any around these abouts. It saw me, 6 feet away and scarpered. it didnt like my porcupine
Top

Out for the second time in my new location and riding along an off-road pathI disturbed a flock of approx 50 goldfinches. I know they flock but I have never seen more than about a dozen.
Current status report:
Back on two wheels in deepest Pastyland and loving every minute. Mission: to enjoy big, bad hills again.
Top
Post Reply
327 posts