For discussions about bikes and equipment.
Post Reply
96 posts

Is the SRAM single chainring set up, set for a dead end ?
Top

Oddly km2, ive just posted on another thread that the redshift shockstop could be a great
Top

shobo wrote:Is the SRAM single chainring set up, set for a dead end ?

There have always been bikes with 1x n setups, the differences lie in what they can do and what they are expected to do. I think that 1x transmissions are often an acceptable compromise, but are almost invariably bettered in some key respects by alternatives.

Oddly km2, ive just posted on another thread that the redshift shockstop could be a great

I was a fan of the parallelogram suspension stems, that they used to have on Bike Fridays.
Can’t remember what they were called, maybe... softride??
Better than a flex stem , probably better than a Specialized roubaix??
Top

bagpussctc wrote:You cannot beat a nice l/f hub imho. These have the spoke holes a bit to close to their edge,but the bearings as smooth as silk. 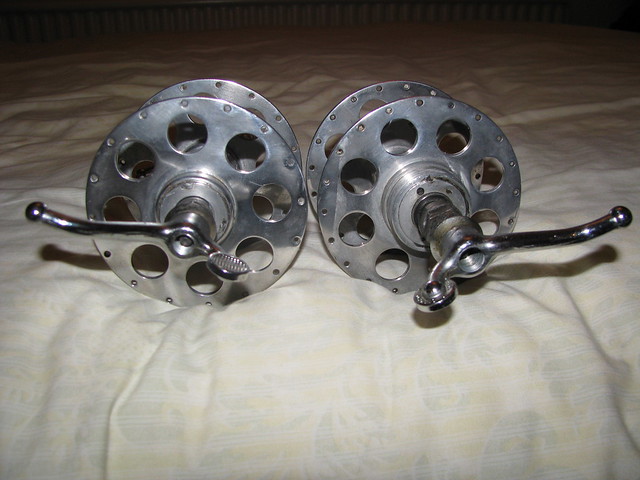 Otherwise, I think large flanges look great. Never owned any myself. There must be an upper limit though (for prettiness, I mean) - I suspect the ones I saw being ridden back in the 80s were *relatively* subtle.

What is the engineer's view? Are they a win?
Top

mattheus wrote:
What is the engineer's view? Are they a win?

They offer a better bracing angle for the spokes provided the wheel is built with fewer crossings than normal. However with flanges like those in the photo I wouldn't build them with fewer crossings than normal; I think it would soon break the flanges. In a typical wheel LF hubs are built 36x3 or 32x3 and there is no real advantage in bracing angle.

There is an appreciable advantage in torsional stiffness of the wheel. This can improve the performance of wheels that see the highest loadings (track, hillclimb etc) and ought to give an improved fatigue life (or simply less wear at the spoke crossings) in wheels that see a lot of hard use in low gears. Or it might permit the use of lighter gauge spokes.

If you build radial the weight of the spokes can be reduced because they are shorter, but the weight of the flanges is increased. The net result is usually no significant weight difference. Wheels with LF hubs built tangent are slightly heavier than wheels built with SF hubs; the spokes in a 36x3 wheel are likely to be about 5mm shorter in the LF case which amounts to about 5g net weight decrease if 14G spokes are used; the added weight in the flanges is quite a bit more than this.

With a very few forks the blades are shaped such that a SF hub will fit but a LF hub will not.

There are practical benefits to LF hubs. Spoke holes are (unless drilled too close to the edge) less likely to crack, and if cracks do occur they are likely to afflict one hole at a time. By contrast SF hubs are both more likely to crack and when there are cracks they tend to afflict several spoke holes at once. It is also possible to change DS spokes more easily on some wheels; for example if you are more likely to get the sprockets off a freewheel body than get the freewheel off the hub (mine were often like this) then spokes can be fitted with the freewheel body in place. The gap between the spokes through which the pump has to fit is liable to be larger in a LF hubbed wheel; the flip side to this is that the angle of the spokes into the nipples is likely to be worse; not every rim builds into a really good wheel if large flange hubs are used.

If you need to replace a spoke in LF wheel, an 'outside' spoke can often be fed through a flange hole (instead of a small gap in the spokes) and because the spoke crossings are set further away from the hub flange (for any given number of crossings), 'inside' spokes are often easier to squeeze between the crossings on the far side of the wheel, as is often required to bring the spoke into the correct position.

Note also that SF hubs nearly always differ in size front to rear. Even with x3 builds this often means that there are (strictly) three different spoke lengths required in a derailleur wheelset (although front and NDS rear lengths may be very close to one another). With large flange hubs it is more likely to be just two different spoke lengths in a wheelset; the flanges are almost invariably the same diameter front and rear, and front lengths are more likely to be exactly the same as NDS rear, (because of the separation of the flanges).

I quite like LF hubs simply because I prefer the look of them. To me, most SF hubs look bland and anonymous by comparison. Even a workaday set of 'Normandy' LF hubs seem a bit special, once they are polished up.

they just need a few minute's work with Solvol autosol