Not quite sure what the actual question I want to ask is, apart from: someone suggest how to solve my none specific problem!

Bought a bike a new year ago. Came with a compact double Tiagra chainset running a 10spd cassette (50/34 and 11-34). Thought I'd give it a go as it sounded better than 1x but am not getting on with it.

I seem to spend most of my time (95%+) in the small chain ring and the smaller sprockets...this I see as not great as it will wear the cassette out quicker. I spin the pedals at a reasonable rate, I'm not mashing. Virtually never in the big chainring - if I do go into it at my normal cruising speed then the chain ends up at an extreme angle to one of the larger sprockets.

Solutions seam to be:
1/ go back to a trusty touring triple. This would mean that I have the gears I want and that the middle chainring would mostly be running with the middle sprockets. BUT it would also mean that I have to buy a new crankset, new BB(?), new LH shifter, new front mech, etc.....not cheap!

2/ change the chain rings on the chainset. If the slightly larger one was mounted on to the outside and a really small (granny) ring was put on the inside then I would have the ideal gears - the larger one would be used most of the time with the middle sprockets when cruising, and the granny would be a bail out on uber steep hills. Two potential problems with this: the chainset is sat so that the inside chain ring is aligned on around the 7th biggest sprocket, so if in the big ring the chainline would start to get dodgy. Problem two: can i actually get a granny ring for my cranckset, I'm guessing the smallest will be 34t?

3/ my other thought would be to put a triple on and not use the big rig (either remove it or grind the teeth off to make a bashplate/trouser protector), thus not having to change the LH shifter

Sounds to me like you'd benefit from an alpine double chainset (and narrower bottom bracket). Something between a 38-44t large chainring and a 24-30t small one. Essentially used as a 1x chainset, plus a few bail out gears on the smaller chainring. 50t rings are pretty high if you are a spinner and/or not racing.

You should work out the gear inches of the combinations you spend most of your time in (e.g 34x14/16/18?) and buy the chainset around that.

Your questions:
1 = not cheap, nor really necessary
2 = almost certainly 34t lowest
3 = this or alpine double, if you have a triple chainset to hand it might be cheaper this way. You'll have to check the alignment of middle ring (ideally want it aligning with the middle of cassette).
Top

You could read this thread. The beginning is relevant to your problem.
viewtopic.php?f=5&t=131772
Cheapest might well be a Spa super compact double. That would mean a new chainset and a bottom bracket. You'd need to budget for a new BB which you 'd need to be sure would fit. As you know which gears you like you'd be able to choose suitable chain rings to minimise shifting on the front and hopefully provide a low enough bottom gear.
Top

Thanks for the replies, given me some inspiration. Think the best solution gear wise could be a mtb double like
https://www.chainreactioncycles.com/shimano-deore-m6000-10-speed-double-crankset/rp-prod161594?gs=1&sku=sku595807&pgrid=60711843258&ptaid=pla-424556597942&utm_source=google&utm_term=&utm_campaign=PLA+All+Products&utm_medium=base&utm_content=mkwid|sUcbk59Ly_dt|pcrid|309840119912|pkw||pmt||prd|595807UK&gclid=CjwKCAjw44jrBRAHEiwAZ9igKAfh_Ic4FD5d4Qicp4w0nSWBOurHWPZCsPyAVqCADW4pITxIh6ESIBoClnEQAvD_BwE

Si wrote:3/ my other thought would be to put a triple on and not use the big rig (either remove it or grind the teeth off to make a bashplate/trouser protector), thus not having to change the LH shifter

That's what I did when faced with a similar problem. The outer chainring was replaced by a 'bashguard' from Spa Cycles for about £10. I lowered the original front changer as much as possible without fouling the chainstay, but it sits a lot more than the recommended 2-3 mm above the outer (middle) ring. However, it still changes faultlessly, and the chain is in no danger of overshooting when changing up.

Incidentally, the original 'compact' chainset was Ultegra. The replacement Tiagra fitted into the Ultegra b/b perfectly. 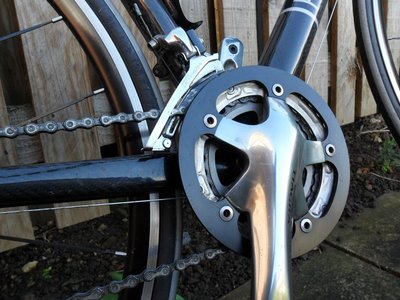 Two possible probs.
1. The mountain bike chainline probably won't suit your road front mech. and the external bearings make it hard to change. If this is not the case I expect someone will chip in soon and say so!
2. The tiny rings will not work very well with your front mech.

Are you able to fit a square BB? If so the Spa type double with say 40 or 42 teeth is probably safer and may well be OK with your road mech. Perhaps a good idea to tell everyone on here more about the bike.
Top

1. Hopefully others with more experience and knowledge can provide more definitive guidance regarding the MTB chainset, but the things that would concern me as potential issues:

- compatibility of your current front mech with the chainset not just in terms of chainline, but also the 10 teeth difference between the rings. I think Shimano road front mechs are designed for a larger tooth difference, e.g. like the 16 teeth gap between your current chainset's rings. Shimano's new GRX gravel chainset has a similarly large tooth difference, and it might be an option to consider. (It uses a 2.5mm wider chainline than the road groupsets, but you might still be able to get your current mech to work with it.

- would your LH STI be compatible with an MTB front mech if you were forced to change the front mech? (I know 10 speed MTB and road rear mechs are not compatible.)

- your front mech fouling the chainstay and/or tyre (or mudguard) if lowered sufficiently to work with a much smaller chainset.

2. My solution to this problem was to get a Spa Super Compact 40/24 plus a UN55 BB. It has a road chainline and the 16t difference that seems optimum for road mechs. I had to replace a Microshift front mech because it did hit the chainstay, and replaced it with a CX70 front mech which was designed for cyclocross 46/36 chainsets, so has a slightly better (smaller radius) curved cage which is also quite short (the Microshift was a long cage, which was why it hit the chainstay). Having looked at an Ultegra mech I think Shimano's road mechs are less likely to be a problem than Microshift's, and if necessary you could likewise get a CX70 (if you do be very careful not to order a top pull version. Bike Components and Rose Bikes still have downpull braze on versions in stock, but UK retailers are mostly selling the top pull version).

Si wrote:I seem to spend most of my time (95%+) in the small chain ring and the smaller sprockets

I suggest you use http://www.ritzelrechner.de to determine what those most frequently used gears are in inches, then see which Spa chainring combination would give the same gears with you using the middle sprockets and larger chainring.
Last edited by slowster on 25 Aug 2019, 9:04pm, edited 1 time in total.
Top

Ray,
Are you running with the triple chainline or is the RH crank moved out as it's now a double? I don't know anything about adjusting chainline with external bearings.
Top

I simply inserted the triple set into the original b/b. As the outer of the three rings is not used, I assume the chainline on the two remaining rings is more or less identical to the orginal compact double. It has run perfectly like that for several years.
Ray
The trouble with the world is that the stupid are cocksure and the intelligent are full of doubt - Bertrand Russell
Top

Shimano chainsets for 68mm (road) and 73mm (MTB) bottom bracket shells come with two 2.5mm spacers to be used when installing the chainset in a 68mm BB shell. One spacer goes on each side, so there is the scope to move the chainset outboard and increase the chainline by 2.5mm, by fitting both spacers on the drive side.

The diagram on page 11 of this tech doc shows how the spacers are normally fitted:

you could fit 33T inner chainring(from TA) and a 46T outer.

Gearing with current cassette and 33-46T compared with 34-50T

110BCD five arm? IRD Tripliser, BB length will come into play, as may budget and UK availability.
There'll be tarmac over, the white cliffs of Dover ...
Top

As Brucey says. With this set up there is less of a step when you change gear on the front making it more practical and increasing the chance if you wanting to use it.
Winter had arrived in the land of Kernow. Along with it came wet roads and cool winds.
“Oh, my wheels and coupling rods!” Peetee exclaimed.
Top

Thanks everyone. I think Slowster wins the mystery prize with the suggestion for the Spa super compact - looks like exactly what i want.
BNB Community Cycling
Top

That is pretty much what I have on my Roberts: 40t chainwheel aligned with cassette centre, 24t inner ring, 11-34t cassette. It works. I use outer ring on 13t to 30t sprockets most of the time.
Top
Post Reply
30 posts