Please be fair and thoughtful in your opinions. No rants please.
Post Reply
20 posts

I'm not sure whether it classes as trolling to post a review of this product on this forum, but anyway, here goes! 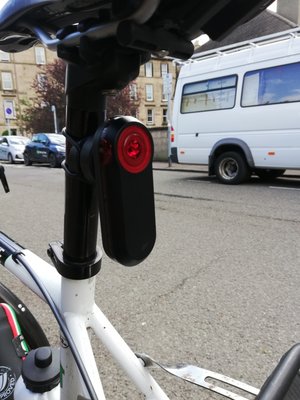 It's a rear light, with a built in radar to spot motor vehicles approaching from behind. When vehicles approach, the light flashes extra hard. In addition, the unit can be paired to a dedicated head unit, or to a compatible Garmin GPS, in order to provide an indication of what's behind.

The unit is USB rechargeable, and battery life is between 5 and 15 hours depending on the light mode.

The unit costs a little over £140, without a head unit.

Yes! I've been using it with a Garmin Edge 1000, and found that it reliably warns about approaching vehicles, showing how many there are, and how far away.

Paired with the Edge, you get a WiFi symbol at the top right if the screen, which means it has connected but there is no traffic. 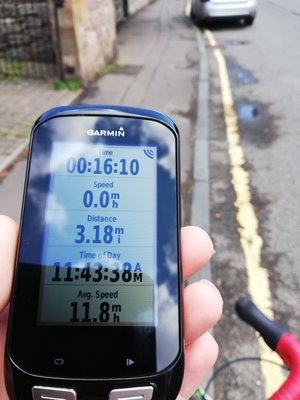 Once a car arrives on the scene, the Garmin beeps, and the right of the screen turns to a display where you are at the top right, and dots representing cars travel up the screen toward you. The following photos are taken with the head unit pointing backwards, so you can see both the display and the road. 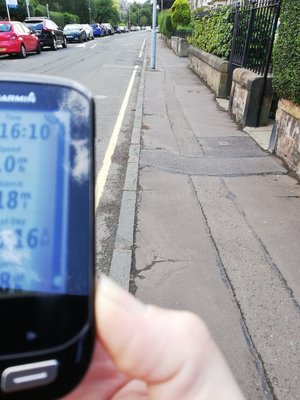 Just after being detected 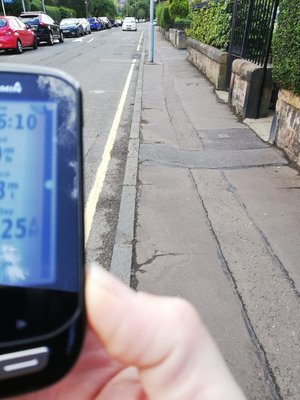 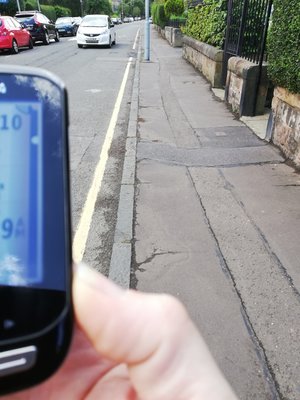 I do a lot of cycling on country lanes, and often ride two abreast. We single out to allow traffic to overtake, but I noticed recently that some friends had much better awareness of approaching traffic than I did, dropping back before I was aware that a car was present.

The radar has certainly helped with that specific problem; I'm now the first person to notice.

However, I've also found it enhancing my solo rides. I'm much happier taking the middle of the lane, with confidence that if a car does arrive I'll have plenty of time to position myself as appropriate. And because the display shows multiple targets at once, you can clearly see whether the overtake is going to be immediately followed by another.

Look, I know, it all seems like a bit of a daft, expensive gimmick, why don't I use a mirror or look behind me? I've never got on well with either of those approaches, and I've put it down to having strong prescription glasses which mean that glances tend to be distorted at best. This device has solved the problem for me, I feel much safer with the Varia watching my back.
Top

If it was £20 I might have bought one, but at that price......no chance! I too cycle mostly on lanes and I can always hear a car approaching from behind, it's going round a blind bend and facing an oncoming car that is my greatest hazard.
I've been hit twice from behind, the first time by a caravan and in 2015 by a hit and run, I just can't see how this gimmick would have prevented either of those incidents.
Top

There's clearly no way I can argue that having this would have prevented either of those collisions, though there's a possibility that having the frantically flashing light as the cars approached might have helped.

In terms of price, it is expensive, but I find that it enhances my cycling experience to a surprising degree, more so than fitting some slightly lighter or blingier components. So, though it's a luxury, it's not a purchase I regret.
Top

philvantwo wrote:If it was £20 I might have bought one, but at that price......no chance! I too cycle mostly on lanes and I can always hear a car approaching from behind, it's going round a blind bend and facing an oncoming car that is my greatest hazard.
I've been hit twice from behind, the first time by a caravan and in 2015 by a hit and run, I just can't see how this gimmick would have prevented either of those incidents.

I have been using the Garmin Varia Radar for a few years now and I rate it highly. It takes a lot of stress out of cycling as you are made aware of how many cars are approaching and how far away they are. Add a mirror to your bike with the Radar unit and it will be even better.

some cars (hybrid) make very little sound. The Radar unit won't stop a car from crashing into you though. If you are cycling on unknown roads and you know there are 3 cars fast approaching, you check the road ahead for potholes etc and you know it will be dangerous if you veer too much to the right.

Buy one .... you won't be dissapointed. All my mates who have been on weekend rides with me have bought one after seeing how effective they are
Top

Does it use much power from the Garmin unit you pair it with and if your in front of another cyclist does it still show approaching cars?
Thanks.
Top

I can't discern even a slight reduction in battery life of the head unit when I use the radar. Last time I used it, I eked out 12 hours from my Explore with a mix of normal and battery saver modes, which is as good as I'd expect without the radar. (NB the radar conked out after about 10 hours, which is the quoted life for my RTL511; IME Garmin's advertised battery times for recent devices seem to be somewhat more accurate than the fantasy figures they used to come out with.)

And I've not noticed any false negatives when someone's cycling behind, though I haven't extensively tested that, and certainly not yet in a tight paceline. I have tried it with some luggage partially obstructing its view, and that seemed to reduce its operating range (ie an approaching vehicle was closer when it first notified me); and in general it won't notify you of an approaching bicycle, but occasionally it will. In fact once when I'd parked a bike on a footbridge it piped up when a bloke with a dog walked up behind it.

The only false negatives I'm confident I've observed so far are motor vehicles behind other motor vehicles. Sometimes it'll spot them, often it'll spot them at closer range than a single/leading vehicle, others it won't really spot it at all, though it doesn't fail to notify for the first in line.
Top

My experience is that cyclists behind occasionally register, then disappear. But that's not much of an issue; a target that appears immediately behind while on a group ride is probably a cyclist, one a long way back will be a vehicle.

I was impressed when it was active on a railway platform; as a train approached it showed a solid target for each of the carriages.
Top

I decided to order a pair of Exposure trace lights, £48 from Chain Reaction, 2yr warranty, made of aluminium and in the UK. 24hr battery life and 99 lumens!
Top

Well my lights arrived roday and I'm well impressed with them, easy to fit and I noticed most cars seemed to give me a lot more room when overtaking. Supplied with 2 USB leads about 3ft long as opposed to garmins 4 inch ones!
Top

I had one of these but sold it as I gave up road cycling due to underlying health issues.
I found the unit exceptional... the only thing I should mention if a car comes up behind you, you'll get the warning... however when he comes up behind you and then matches your speed there's no "little dot" on the screen to show he's there... He may have turned off but he might still be there! Beware!
Top

I've seen that, but its not immediate. The car need to sit there are the same pace for a decent period before they virtually vanish. The only worry I ever have with that is it may indicate a driver who is nervous about overtaking.

I have the older square design for several years now and love it. The display does do a very impressive job of indicating the number and relative speed of the approaching cars. Yes, I can often hear them anyway, but now past 50 I'm also aware that I'm hearing them less and with electric cars around that will only get worse.

The units are also surprisingly good a car numbers, 'is it 1, 2 or 3', helping stop the accidental pull back out from the kerb that we all occasionally made. Obviously, once in a busy town centre its just a flashing light and the display not really adding anything you didn't already know.

Battery wise they are good but with one caveat. When linked to the Garmin, if the Garmin switches off the rear light goes into a standby mode waiting for the Garmin to reconnect. That draws more power though is shown by the charging light flashing blue. Easy when you've ended your ride to mistakenly leave it in that state rather than switching it fully off.
Top

Yes, the disappearing car feature is a bit annoying.

I can understand why it happens, as the standalone unit it doesn't know when you are moving, and it would be rubbish if when stationary it alerted you about every other feature in the environment that was also stationary.

However, it would have been nice if a paired head unit could inform the light about bike speed, so that relatively "stationary" targets could become interesting.

BTW, I'm still using mine on every ride, and finding it hugely valuable. The main value is for confirmation that there's nothing behind. This gives me more confidence to make a shoulder check, or use more of the road.
Top

And as Sizbut will confirm it picks up ebikes as well!
Top

I said on a previous post that I'd sold my Radar as I'd given up road cycling.
Well I really missed my trips out so I've treated myself to a Brompton Electric as I have one new knee and the other one has a displaced patella and requires "something to be done" but probably next year after Corona Virus.
I switch the electric power off on the Brompton if it's at all possible but have the power to switch back on when I need it on steep hills.
Anyway back to the plot...... I'm back on the road and treated myself to a new RTL510 set as I found it on offer at only £25 more than I sold the "old" model radar for!.... It has given me confidence once more to ride on the road again and am using it when I take my "daily exercise".... having said that the roads are beautifully quiet at the moment.
Top

I have just purchased one of these so will be interested to see how I get on with it.

Being a motorcyclist at heart, even when driving a car, I glance over my shoulder when a manoeuvre is performed.

I have a rear rack bag so had to jig up a mounting bracket but that's fairly easy.