For discussions about bikes and equipment.
Post Reply
19 posts

I would be grateful if you could name the models of the following gear mechs and levers - all believed to be ca 1991.
Also, some of you probably trade on eBay, or at jumbles, much more than I do. If you would care to suggest how much I might sell them for I would be grateful. I think they have had only a couple of thousand miles of use. 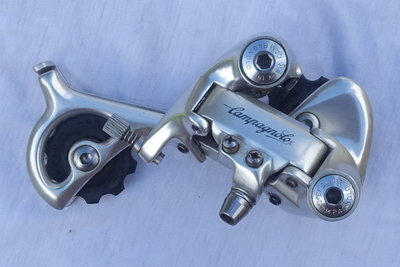 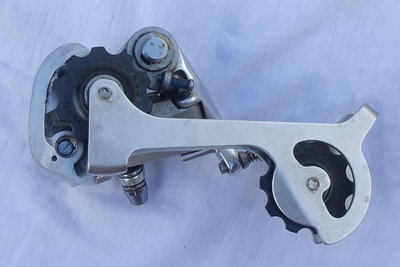 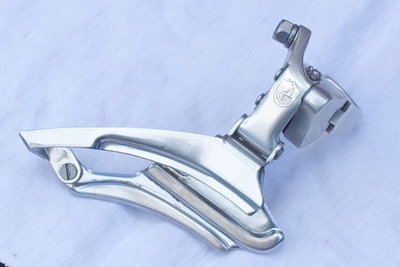 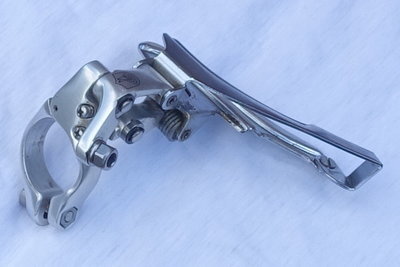 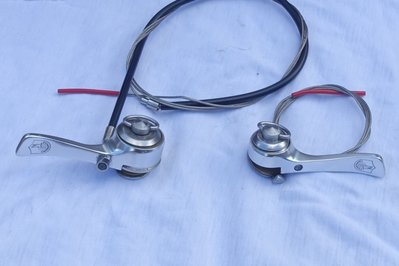 I would be grateful if you could name the model of this pair of hubs - believed to be ca 1991. 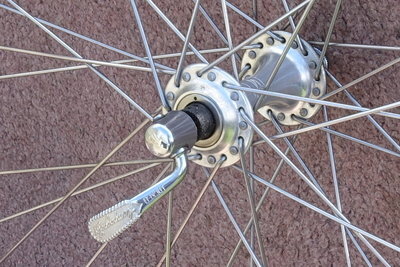 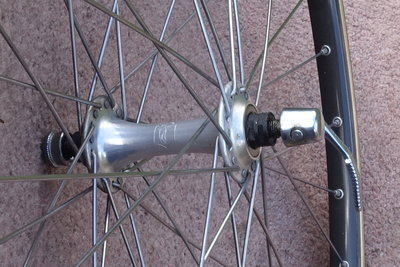 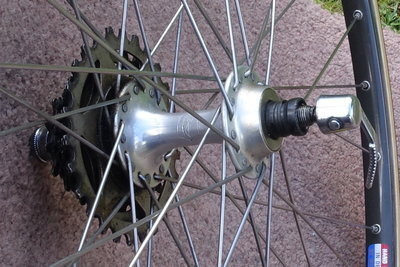 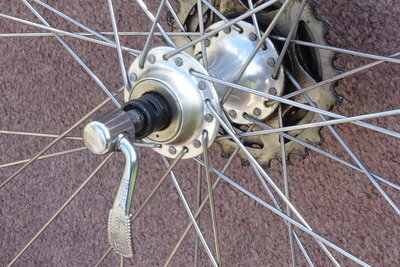 they look most like 'victory' hubs (for threaded freewheel) to me. A lot of their hubs look very similar but top end campag road hubs of the time had lube ports in the hub barrel, and the more basic ones had hexagonal locknuts and no vent drilling in the dustcaps.

You can compare with the photos in velobase to see if there are differences or not.

The mechs I am not so sure about but they are of a style that first appeared in about 1991 like you say. At a guess the RD is a centaur and the FD is meant for a triple but I am not 100% confident on this. 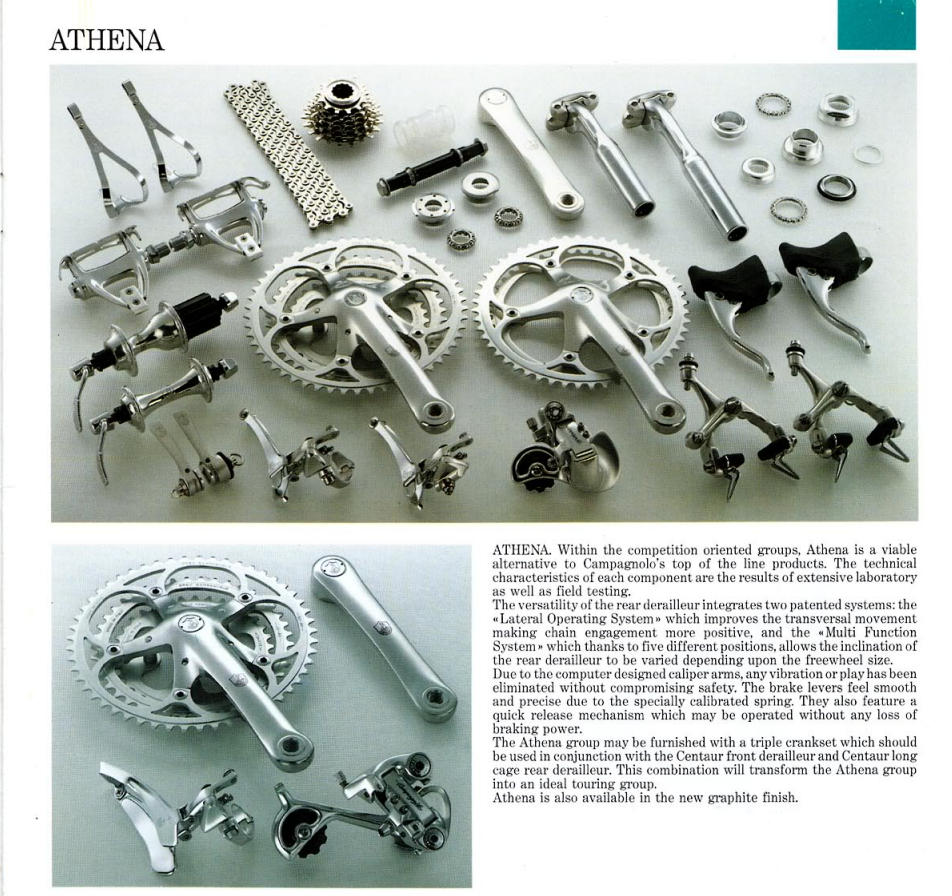 The RD resembles the one above (the barrel adjuster is different on different models) but the FD is not the same. The FD looks more like the one in the Record OR groupset 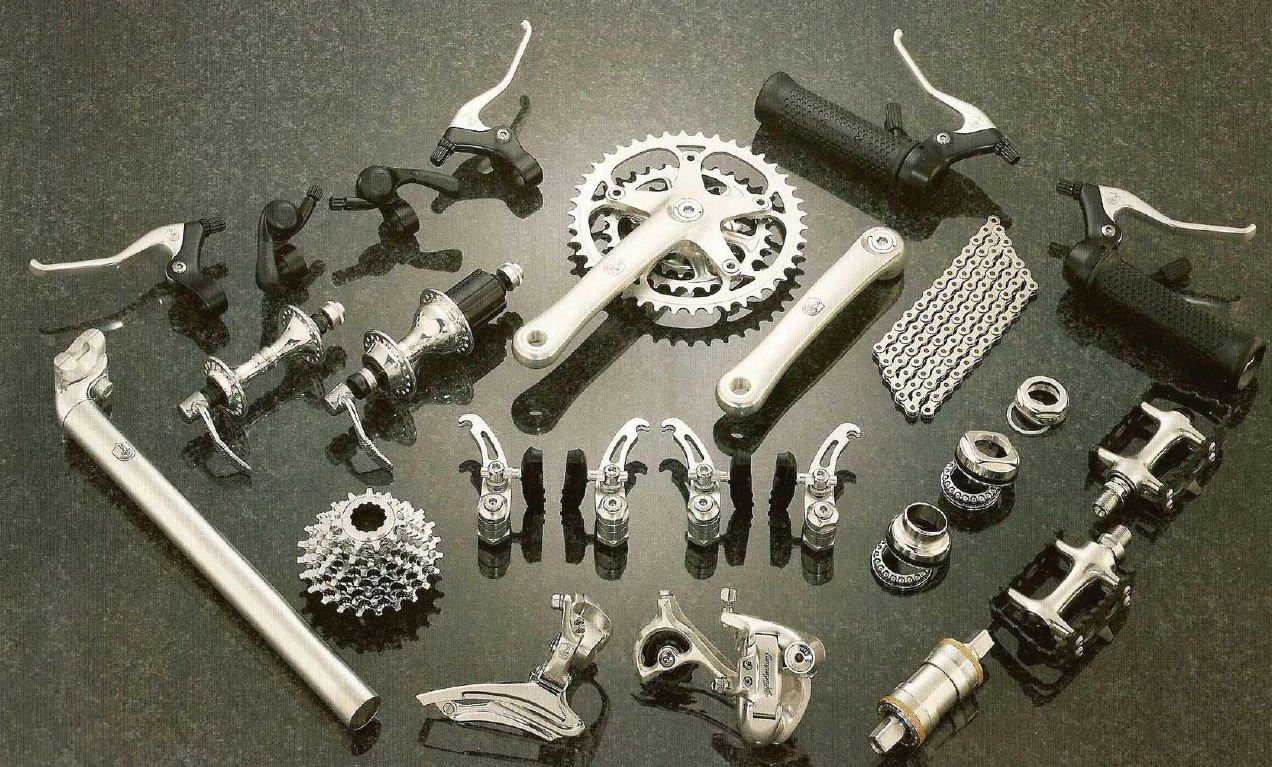 I think the gear levers are 'Synchro II' indexed shifters and most likely have an 8s insert in them (seven clicks, easy enough to check) but it could be different to that depending on the way the system was configured.

Value-wise you can see what they have been selling for on e-bay.

Agree with Brucey - FD looks identical to the Record i have floating about somewhere.

At the cycle jumble at York Rally last year there were a lot of similar vintage Campag mechs on offer in the £30-£40 region - the caveat with that is that they weren't selling so clearly overpriced which is often the case on Ebay too.
Convention? what's that then?
Airnimal Chameleon touring, Orbit Pro hack, Orbit Photon audax, Focus Mares AX tour, Peugeot Carbon sportive, Owen Blower vintage race - all running Tulio's finest!
Top

The rear mech could be Euclid or Centaur. I used one (I forget which model now) for many years. Of Euclid and Centaur, 1 model was the one with the 2 tension springs with the allen key slot visible (as per OP's photo and the Athena photo), and the other model had the lower tension spring hidden (smooth aluminium visible), as per the record photo (bottom photo), alas I forget which way round it was.
However, the OP's gear is one of the first versions - the index adjuster screws into a steel insert in the aluminium housing, on later models the index adjuster screwed straight into the aluminium housing.
It might be worth checking the design of the jockey wheels. The ones in the OP's photo look like standard plain bearing jockey wheels. The Euclid (and/or Centaur) mech I used had jockey wheels with loose balls in, the bearing was adjustable. Intestingly, the surfaces (aka"the cones") were a straight profile, not a curved profile as per you normal hub cone. I remember the side washers as chrome plated with a raised hexadon in the middle (for your spanner to adjust the bearing). Also the OP's photo of the back of the mech suggests plain jockey wheel bearings, on my mech, there was a small slot on the back plate stamping where the jockey wheel side plate engaged, so it didn't rotate as you adjusted the bearing on the other side.

Identifying Campag parts from this era to me is a nightmare, they usually didn't have the model written on them, nor did they have a model number stamped on them like Shimano alway do. If you clean them too much, the "Campagnolo" starts to wear off too!
Top

Gentlemen, many thanks for your helpful replies.
Brucey, particular thanks for directing me to velobase - I have spent some time exploring it.

These components were on a 'King of Mercia' I bought off the Veteran-Cycle Club about three years ago. It was described as 'unridden' but had in fact done a couple of thousand miles by my estimation, but obviously in superb condition. It has a '91' frame number and everything that should be greased had been greased. I guess it had been bequeathed to the VC-C. I bought it mainly for the frame because my Roberts is 35 years old and getting a bit tired. I have only ridden it a couple of hundred miles; the component set does not entirely suit me, e.g. overgeared with a 48-38-28 triple and a 12-25 7-speed freewheel; I prefer freehubs. I have now started pensioning off the Roberts and swapping parts to the Mercian.

Using your replies to narrow down my delving into velobase I concluded that the Campag parts are a mixture of Centaur and Record: RD - Centaur long cage; FD - Record OR; shifters - Record SL-01RE, because of the cable adjuster on top of the RH lever, with 7-speed Syncro II type indexing; hubs - Centaur Q300.

Your replies were really helpful - thanks again.
Top

Wow - classy stuff! I had a lovely 531 frame, which I built into an early hybrid type bike, before I switched to Moultons, which I fitted out with a Chorus groupset, of the same age. Happy memories

Those hubs are Chorus (Chorus hubs were the same as Athena except that Athena had a different nut on the end of the quick release).
Top

I think you are right. Mind you, Victory hubs do look very similar, even if they were not current in 1991. 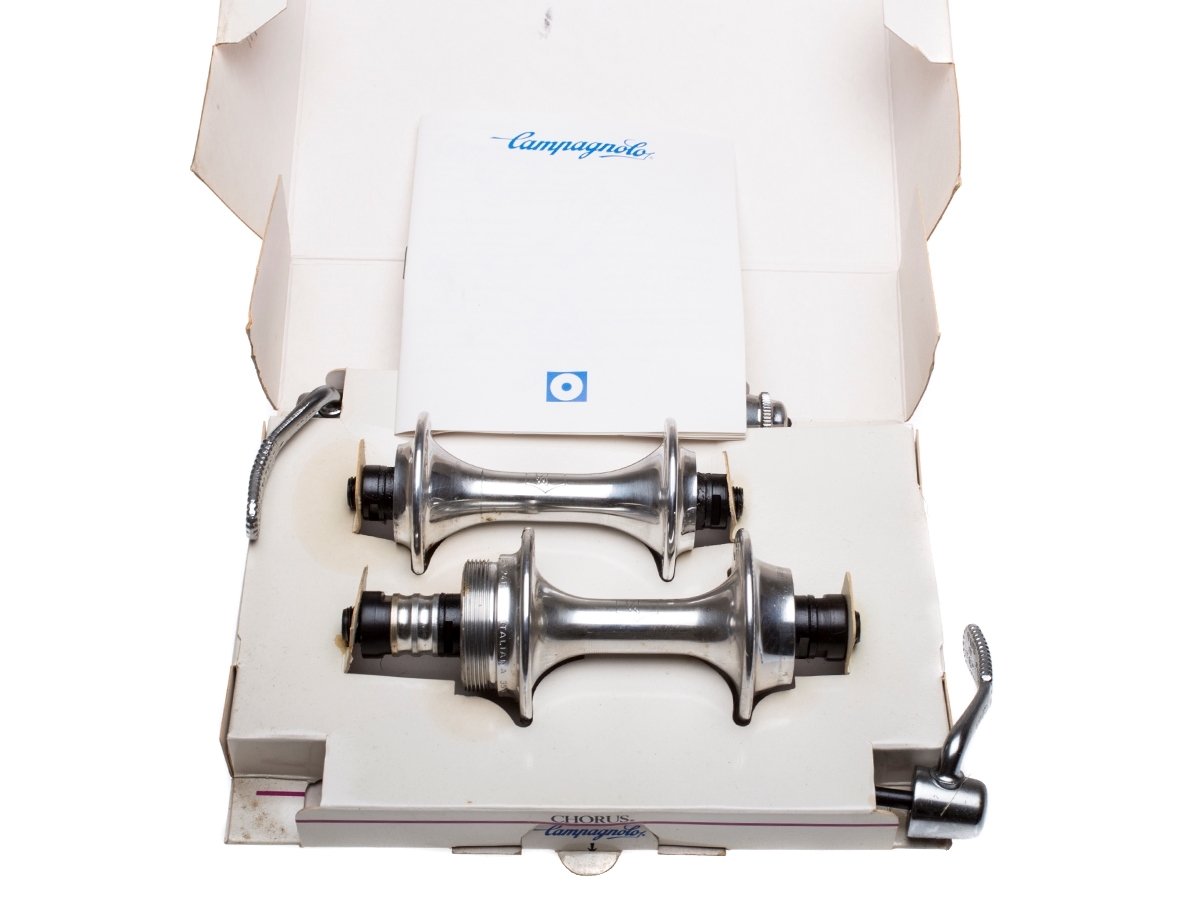 is there any difference in fact?

Yes, they look the same, I hadn’t appreciated that.

For what it’s worth and as I recall, the nuts on the Athena skewers around that time were like these. 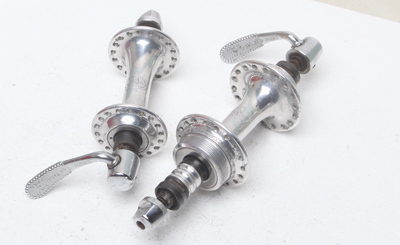 Mark S wrote:Yes, they look the same, I hadn’t appreciated that....

tbh neither had I.

Thank you for today's posts. I concluded Centaur because my hubs are 130mm OLN, whereas Velobase has non-freehub Athena and Chorus hubs being 126mm OLN, but maybe Velobase doesn't know everything. Velobase has Victory (a few years old in 1991) being 126 or 130mm OLN, so that's possible but maybe not likely.
So now I'm confused, but how much does that matter? They all look quite similar (from the internet photos), so were there significant differences in their specifications? Would their market values now be much different?
Top

I'd assume by 1991 Chorus would have been available in 130mm. I had a quick look earlier and I did find used hubs being advertised as chorus/victory which suggests that there is in fact no difference whatsoever. A campagnolo parts catalogue from the relevant years would make this clearer.

FWIW Victory was launched as a being second only to campagnolo Record, and when Chorus appeared, it was effectively a Victory replacement. No surprise then that some parts carried over. Victory arguably suffered from looking too much like Triomphe; often the parts look virtually identical, even if they are not under the skin. Chorus looked a lot like C-record in many respects, so most folk (myself included) saw it as a step up from Victory, even if it was similarly constructed under the skin.