After lurking on the outside peering into the world of laid back cycling for many years (having sampled a few times), I've taken the plunge and ordered a Street machine GTE - taking advantage of the cycle to work scheme.

Get and use a mirror
Don’t hold tight

You may have to learn to ride a bike again. Find a gentle downhill and scoot, then lift feet, then aim for one pedal, then the other...

A mirror is top of the list of extras at the moment.

I've been using a Garmin rear light with radar for about 18 months. Whilst I don't depend on technology, it's proven to be exceptionally useful in knowing what is behind. I thought it would be a bit of gimmick, but works pretty well - although I never completely rely on it, especially when turning right.

Old and not so bold!
Top

You do need to be somewhat bold, to make up for the dithering/interest that a bent can induce in motorists.

But not so bold that you miss out on being old.

Practice before you commute - you need to be reasonably confident before you *need* everything to work together.
A shortcut has to be a challenge, otherwise it would just be the way. No situation is so dire that panic cannot make it worse.
There are two kinds of people in this world: those can extrapolate from incomplete data.
Top

steve6854 wrote:After lurking on the outside peering into the world of laid back cycling for many years (having sampled a few times), I've taken the plunge and ordered a Street machine GTE - taking advantage of the cycle to work scheme. 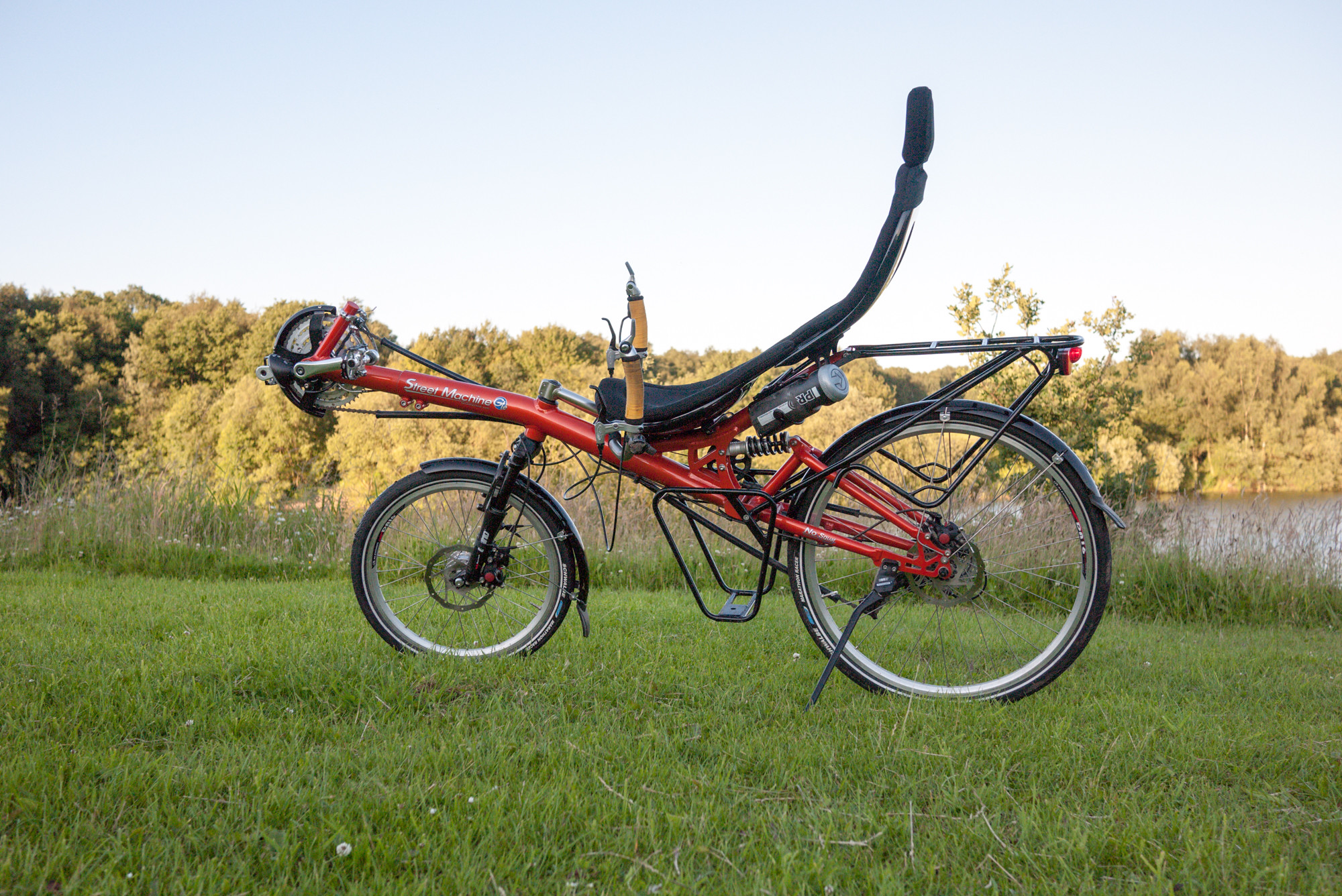 hp (1) by mark tilley, on Flickr
Congratulations Steve, whereabouts in the country are you?
I have just got mine,but its a lightly used s/h one, after pondering for 18 months. Only had it 2 weeks, still getting used to it tbh, and it is a wonderful thing, and supremely comfortable, but quite heavy, most noticeable up hill, but it's not supposed to be fast, as its a tourer. My avg speed on my df tourer was around 19.6 km/h, now, after nearly 400 km, on a usual 60km flatish loop, I'm up to 22.1 km/h. Mirror is an essential I would say, but mine had one. Setting the boom will take a wee while, as where you think it should be, will probably not be enough, as when you get comfy, into a ride, you settle into the seat, and then you'll see the boom isn't quite right.. The muscles above the knees are were I feel it most at the moment, and after a spirited ride, when I stand up, I feel a bit drunk, my legs are some one elses. bearing in miind I've only been rididng it 2 weeks, others will have a lot more 'useful' input. When will it arrive? What drive train did you choose? 9x3? Rollhof?
Top

I'm not sure when it will arrive. I think about 6 weeks. The Cycle to Work application needs to be approved before it can be ordered, I'm at the mercy of my HR for that.

I've gone for the 9x3, I'd love a Rohloff but I wanted to keep the bike under the £3k cycle to work limit.

I accept the SMGTE is a bit heavy - seen them referred to as the PanzerFiet! But I'm looking for comfort and enjoyment - not a razor sharp twitchy ride.
Top

For under seat steering I was using a Zefal 95293 Spy Double Adjustment Bike Mirror on my Speedmachine and Scorpion.

As far as muscles go, it’s my quadriceps that are feeling the pain the most when I’m on a recumbent. It helps to spin up the hills and I’ve used Sunrace wide range cassettes successfully on both recumbents. I had to fit an extender on the hanger to get a 40t cassette to work with the X4 mech on my Speedmachine. That’s a 3 x 8 dual drive but I get enough spread with a 39t on the front and a 40-11 cassette.

As has been said, don’t hang onto the bars too tightly and I know my bikes are pretty sensitive to where the C of G is when you adjust the boom, seat angle and sag on the suspension. Too far back for me makes things a bit nervy, but I’m super tall so it’s unavoidable really.

Welcome to a pretty exclusive club. Don’t think you’ll see many, if any, other recumbents when you’re out. I know I don’t.
Top

My experience was that it took me years to crack it, but then I was time limited (just had twins).

It's all about balance, so roll-downs aplenty and then when you can pedal in a straight line start practicing circles, then figures of eight.
What surprised me is that I managed to learn in very short (10 min) sessions even when they were massively spaced out (months).
If I had a baby elephant, it would point out that there is no evidence for planing. Then it would eat all my bananas.
Top

Hill starts! - find yourself a nice, long, steady uphill - start then stop, repeat until you reach the top, then enjoy the coast down as your reward. Repeat until confident...

Angled junctions / slotting into traffic - IME that's where the mirror comes in, so you can wait for a gap whilst still in the riding position for a quick start.

Fast stops (1) - beware lifting / locking the rear wheel (I think the suspension contributes)
Fast stops (2) - you put a foot down as you stop, then the suspension unloads whilst you down leg remains in the same position = increased angle of lean = oops!

Thank you to all for your comments and observations. It looks like my StreetMachine will be with me in early July now that I have all the bureaucracy that is the Cycle to Work scheme out of the way.

I've got a suitable hill in mind on a quiet country lane, dead straight for ½ a mile and gradually increases in steepness. Should be good for practicing hill starts

Just got to find somewhere suitable to practice slow riding, circles and figure of 8s. Limited choice of car parks in this privatised world, but let's not get into the politic of the privatisation of public space...

BTW, I'm based in West Berkshire - anyone near here?
Top

Mirrors, lights and a flag improve visibility and awareness of other vehicles. Being laid back develops different muscle groups which will soon become normal for you.

Welcome to the ‘new normal’ ! Hopefully the unusual sight will garner a fascinating respect from other road vehicles and pedestrians. Keep smiling!

Mirrors and lights yes, I’ve never seen a flag before the rider. I have had people look straight at 6 feet of 2” rainbow streamers and then carry on anyway...


From behind they tend to be edge on...
A shortcut has to be a challenge, otherwise it would just be the way. No situation is so dire that panic cannot make it worse.
There are two kinds of people in this world: those can extrapolate from incomplete data.
Top

Just had an 'upright' friend explore my stable of recumbents (Kettwiesel trike, Speedmachine, Bacchetta Strada, BikeE). He loved them all but especially the Strada which he found very stable and fast.

His spontaneous comments were:

"You can really feel the different leg muscles you need to use" I agreed, I remember hills felt like cycling through treacle at first, full hill climbing strength took me a good 6 months to obtain.

"It's like learning to ride a bike again" On his first 'push off' he went straight on into a kerb. After a bit of 'sit up and scooting' and my calls to 'relax and the bike will look after itself' he was fine.

"This is serious fun" - enough said - and on getting back on his upright, "blimey this is high"

In my experience it is those with motorcycling experience who most rapidly adapt to recumbents. Like a motorbike a recumbent only balances whilst moving and cornering requires a motorcycle level of countersteering - what you do naturally on an upright bike (steer left into a RH corner to make the bike fall right before you can turn right) has to be a little more pronounced on a recumbent because you can't lean your body.

Slow speed maneuvering can be a little challenging so unclip before junctions; also when going very slowly apply a little back brake and pedal against it - not sure how this works but it does increase stability remarkably (remember, a recumbent has a 'stall' speed, think aeroplanes!)
Top

Great points to note there

) and have ridden motorbikes fro over 40 years, so counter steering is completely intuitive to me.

My SMGTE should be with me mid-July. Just in time for the autumn weather - it's been a strange year so far!
Top

I found it difficult to lean into the turn at first.
It just didn't feel right, to be laid back and leaning.

Felt like I was falling backwards.
Even though I'd been riding bikes since I was 4yrs old!!! (56yr old now).

If you 'Relax" & practice,
It soon becomes 'normal' to your senses.

Have fun and keep