For discussions about bikes and equipment.
Post Reply
40 posts

Certainly others have been successful with Shimano 10 speed mid cage with a 36T sprocket viewtopic.php?t=106448, avoids the more agricultural looking MTB mechs though appreciate if that's only option you go with what works.
A bonus though if it works with Campagnolo but still doesn't avoid the look.

I haven't tried it personally with the 5700 GS as I run a triple with so have only need for a 30T large on that bike, but when I ran a 6700 short cage, it worked easily with the 30T that Shimano said was it's max sprocket, reckon there was room to do 32T and so would be worth trying with the 10 speed GS variants with a 36T if not already done so.

In terms of later stuff, currently run Dura Ace and Ultegra 9000/6800 short cage RDs and both work with a 32T without any issues (It will do 50/32 very smoothly should I forget which ring I'm in), add to that a 33T inner I can get up some of the steeper stuff on my 'gravel' bike.

I measured the spacing on my 10x Chorus shifter, R7000 105 rear mech setup. Used to have a GRX mech on there until I wrecked it, R7000 was a stopgap that has persisted! It's actually a Campagnolo freehub/cassette, Hope RS4 hub.
1-2 and 2-3 are one piece, effective spacing 4.2mm, 1.8mm sprocket and 2.4mm spacer.
All of the following loose sprockets were 1.8mm thick
Spacer 3-4 = 2.8mm
Spacer 4-5 = 2.8mm
The rest of the spacers were 2.4mm.
Giving a total sprocket+spacer stack of 40.4mm
This only just fits on the Campagnolo freehub body - it has splines to the end of the freehub and I'm not convinced the 11t would make enough contact with the truncated splines of a Shimano freehub to work
Indexing is completely acceptable for me with this spacing/combination of parts. It indexes ok with half a turn of the barrel adjuster either way, it's not proven finnicky in use.
The effective spacing I ended up with is 4.2mm for gears 1-3, then 4.6mm for 3-5, then 4.2mm for the rest
Top

Pic of the bike, it's done 5k miles so far with this Shimergo setup including 2 tours of Ireland, Dirty Reiver and the Dunoon Dirt Dash 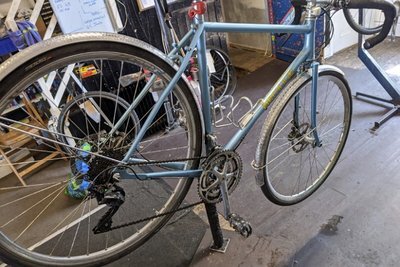 CJ wrote:I think the probable reason it works so well is the way Ergopower shifts. It was very noticeable during my measurements that there's a large over-travel on the downshift - much larger than with Shimano shifting. With this , the mech goes a good 2mm further before the shifter clicks – and then settles back. The settling back may leave it 1mm out, but the 2mm overshift has already carried the chain onto the sprocket – and apparently there are enough chain links between the guide pulley and the sprocket to accommodate the odd millimetre of residual misalignment without complaint.
.

The overshift may well explain why it is more tolerant than might otherwise be expected. I also note that chains and sprockets just keep getting better and better too; they seem to increasingly either run relatively smoothly or shift, with less of that 'will I won't I' chittering and clattering inbetween.

Years ago overshift was something that was useful in pre-index systems too; using suntour powershift levers and suntour RD with a standard spaced block there were about four clicks per shift which meant that you could overshift a little (anything up to just less than one click); the downshift would go better and the alignment would still be perfect after the shift. Once click too many didn't always run sweetly after the shift though. I had one set of (cheap) shimano friction levers that had built-in overshift, i.e. there was some deliberate (I assumed) backlash in the RH lever between the lever itself and the friction clutch. With many setups this meant less post-downshift trimming than normal. However it presumably also meant that the RD was pulled hard into the limit screw every time bottom gear was selected, which I can't think was a good thing.

Related to all this is 'float' in the guide pulley. Without any float there is less tolerance to running whilst misaligned, and faster wear in the guide pulley teeth should this occur. There is presumably an interplay between 'float' and any sticking friction/stretch in the cable, as well as how abruptly the shift is made too, all of which would be expected to affect how well aligned everything is during and after the shift; however I wouldn't claim to understand how this all works exactly. However I do note that modern mech designs increasingly have little or no float in them; maybe this means that they shift well for longer as the mech wears in the pivots etc; it certainly requires that the indexing is more accurate if silent running in gear is to be achieved when everything is new; maybe some shimergo-type setups can only be expected to work well if there is 'float' present...?. Occasionally I've extracted 'the last five minutes' out of a worn RD in an accurate indexed system by replacing the guide pulley for one with no float in it. More often it has been 'wear vs float' when trying to get a system set up right and I suppose once a RD gets a bit worn an imperfect indexing system will be more likely to start to behave badly.

AndyA wrote: ...It indexes ok with half a turn of the barrel adjuster either way, it's not proven finnicky in use....


overshift or not, that is about as good as you can expect it to be, comparable with the tolerance seen in a system with all new matched parts, and (IME) more likely to keep working even when the RD gets a bit worn and the cables start to get a bit sticky.

Will Chris's mod work with my triple?
Top

Ah, thanks Brucey I'll work that out because I currently use 11-32 which is adequate for my needs.
Top

You can ALWAYS have a bigger front difference. You just don't have to mind that the chain dangles loosely in the little ring and the two or three smallest sprocket combinations you never need anyway. That dangling never, ever does any harm in my very long experience (there was even a bunch of 1930s Frenchies used to ride like that all the time, search 'flottantistes'), just makes a bit of noise to remind you that it's high time you shifted to big ring and some sprocket bigger.
Chris Juden
One lady owner, never raced or jumped.
Top

P.S. Recently went for a ride, only 20 miles but 700m of climbing, so lots of shifting. Still works a treat. And note: this is a chain and cassette that are half worn out already, so I think I know that this isn't an 'only works when new' phenomenon.
Chris Juden
One lady owner, never raced or jumped.
Top

CJ wrote:You just don't have to mind that the chain dangles loosely in the little ring and the two or three smallest sprocket combinations you never need anyway. That dangling never, ever does any harm in my very long experience (there was even a bunch of 1930s Frenchies used to ride like that all the time, search 'flottantistes'), just makes a bit of noise...