On a couple of recent threads https://forum.cyclinguk.org/viewtopic.php?f=49&t=138678&start=15,https://forum.cyclinguk.org/viewtopic.php?f=5&t=137784&hilit=Trig&start=30, "Trigger" has mentioned his problems with comfort on the bike, so we thought we might have a go at doing a bike fit through these pages.
We made a bit of a start on the first thread I linked, but for completeness I will do it all from the beginning here.
Exercise 1.
I have never seen Trig. on or off his bike (as far as I'm aware) so I'm assuming when he is riding on the hoods, he looks a bit like me here... 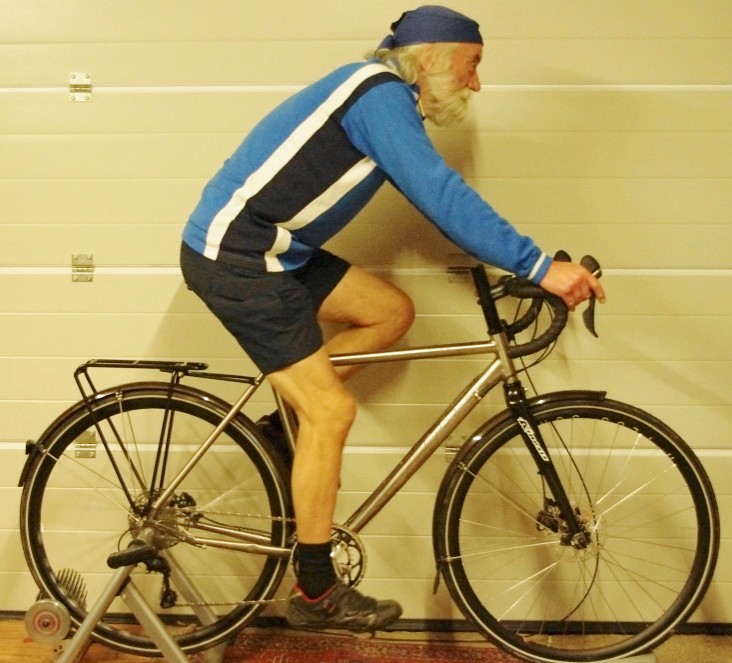 foot level on bottom pedal by 531colin, on Flickr
That's about whats recommended for recreational/touring riders, to have your back and arms at about 45 degrees to horizontal.
The next picture 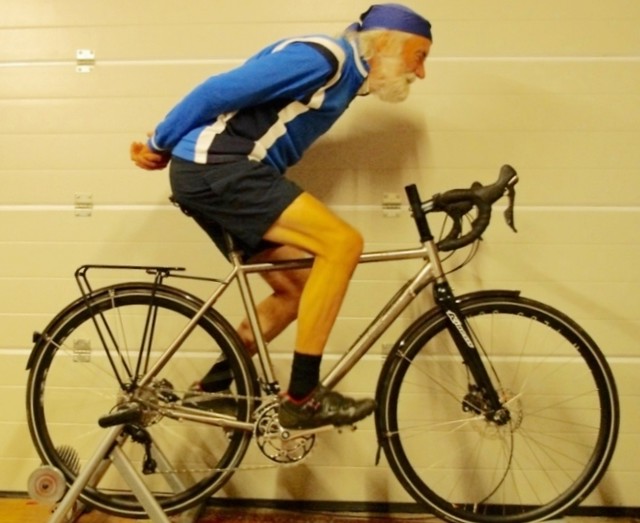 Balanced position by 531colin, on Flickr
shows me with my back at the same angle not supported by my arms. I'm on the turbo, so I'm not going to fall off, and I can carry on pedalling. Anybody following this who doesn't have a turbo, you can do much the same riding along with just your thumbs on the hoods 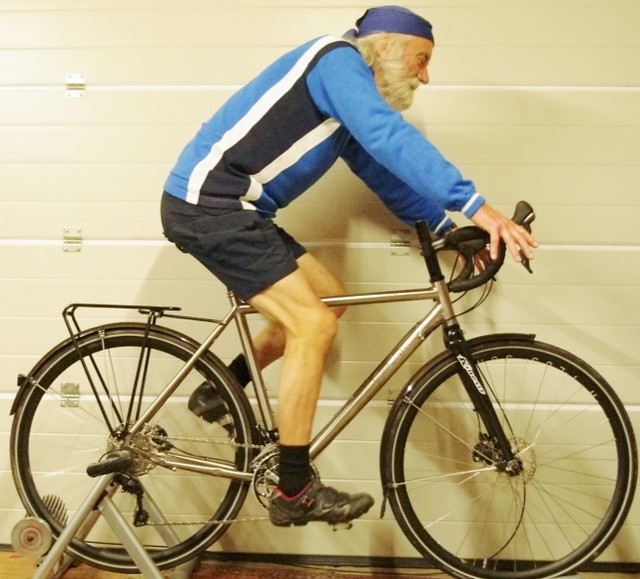 one digit test by 531colin, on Flickr
or by fleetingly holding your hands just above the bars. (or riding no hands, if you like, but without sitting up)
Now I know from the previous thread that Trig. can hold his "hoods" position not supported by his arms on the turbo, but the question is do you need to pedal to support your torso? If you need to pedal, then how hard? Its difficult to communicate how hard you are pedalling, but for example; an effort you can hold for half an hour? or ten minutes? or five minutes? or a maximal effort you can hold for two minutes?
Bike fitting D.I.Y. .....http://wheel-easy.org.uk/wp-content/uploads/bike-set-up-2017a.pdf
Tracks in the Dales etc...http://www.flickr.com/photos/52358536@N06/collections/
Top

Exercise 2.
On the turbo (or just riding along) with your hands on the hoods you should expect to have just about enough weight on your hands so that you can steer the bike without curling your fingers round the bars. Now ride at slowly increasing effort, on the turbo or for example on a rising road. At some level of effort you will find you no longer have any weight on your hands at all, but you are pulling up and back with your hands to resist pedalling forces.
Same question; is this a level of effort which you can keep up for half an hour, or ten, five, or two minutes?
(Hint; if a "ten minute effort" takes your weight off your hands, then when you are out riding any sort of a hill will mean you don't have any weight on your hands, and this will happen very frequently during your rides, giving your arms/shoulders/etc. a change.)
Bike fitting D.I.Y. .....http://wheel-easy.org.uk/wp-content/uploads/bike-set-up-2017a.pdf
Tracks in the Dales etc...http://www.flickr.com/photos/52358536@N06/collections/
Top

Thanks Col. I have a sore back and it's far too hot to start this evening, I will have a go tomorrow and see if I can somehow prop up the phone to capture my efforts.

I can put my hands behind my back with or without pedalling, even lower my torso down further than the riding angle. I can keep weight off my hands and lightly hold the bars with a conscious effort, but it isn't sustainable over many hours, a bit like lying on your back on the floor legs straight and holding your heels off the ground by a couple of inches, you can do it for a while but it's just natural that you will put your legs back down.
Top