I have just measured the shell width as 64.5mm on my CF conversion. I was expecting 68mm. Is 64 or 65 an old Raleigh standard? I can't find much about this on the web. I know I can always use S-A sprocket spacers as BB washers to get close to what ever I want and adjust the chain line, but I'm puzzled as to the origins of this width.
Top

IME it is not uncommon for 1960's bikes to have BB shells a few mm less than 68mm. ~66mm is quite common. I have never seen this documented anywhere.

Can't remember the width of the Raleigh Chopper, but it was "old Raleigh".
I fitted a double chainset so needed a square taper BB long enough ............. couldn't be found.
So I bought a standard BB spindle, cut it in half and used a sleeve to "telescope" it to the correct length.

Brucey wrote:IME it is not uncommon for 1960's bikes to have BB shells a few mm less than 68mm. ~66mm is quite common. I have never seen this documented anywhere.

Mick F wrote:...So I bought a standard BB spindle, cut it in half and used a sleeve to "telescope" it to the correct length.

I sold the BB spindle as there's a ready market for fitting modern ST chainsets onto old Raleigh bikes.

Much of the discussion about my Raleigh Chopper modifications is on here, but on the previous incarnation of the forum. It can all be found if you have the desire.
Some of the threads were about different subjects to do with the bike, but it's all there ......... somewhere.

I did a blog about my JOGLE on it, but not much about the run-up to it.
http://jogleonachopper.blogspot.com

First rode the bike in summer of 2009 having been given the thing some months before.
Looking at my records, I rode it three times in 2009.
22 August, 20 September, and 17 December totalling 26miles.

By January 2010, I rode it to the exclusion of anything else, and towed a trailer with a concrete block in it. The block weighed 44lbs and added to the weight of the gas-pipe bike plus the trailer it was the very devil to get up the hills, but boy was I fit and JOGLE was a doddle!

Over the past few months, my Chopper has undergone quite some modification. The basic three-speed Sturmey Archer gears aren't enough to take me up and down the hills and the length of the country pulling and carrying my stuff and luggage, so extra gears had to be fitted. I spent a while thinking about this, and with the help of a friend was able to squeeze a double sprocket system onto the hub. This produced an increase in ratios up to six speeds, but this still wasn't enough. I fitted a double chainset too, and then the six speeds were doubled to twelve! It's not just the amount of ratios that counts, it's the range that I needed, so I ended up with a super-low gear for the hills, and a reasonable high ratio for whizzing along the flat bits - superb!

I think the Moulton MK3 is around 73-4mm. Plus it had 26 tpi threads. This model was under the wing of Raleigh. Perhaps a similar affair to the Chopper shell?

garygkn wrote:I think the Moulton MK3 is around 73-4mm. Plus it had 26 tpi threads. This model was under the wing of Raleigh. Perhaps a similar affair to the Chopper shell?

This is what I was illustrating.

It isn't just the width, but the threads too. It's a fairly recent development to standardise BB shells and threads in general. When I was a kid, I knew that "bicycle threads" were very different to normal ones. Even normal spanners wouldn't fit a bike, but they do now.
Mick F. Cornwall
Top

Thinking about it, I knew about Raleigh BB being a different tpi compared to the "normal" British BB. It was used on the MK3 only though, AFAIK.

Anyway back to the problem in hand, If I want to fit a hollowtech crankset and bb bearings to a Mk1, 64 mm bb shell. How close to 68 mm do I have to get with my spacers? - or do I have to go to 73mm? How can I tell if I have achieved a width such that the preload thing-emy works properly. If I don't have enough thread engaged in the shell, can I put spacers outboard of the bearings rather than between the bearings and the frame?
Top

Mick F wrote:….It's a fairly recent development to standardise BB shells and threads in general. When I was a kid, I knew that "bicycle threads" were very different to normal ones. Even normal spanners wouldn't fit a bike, but they do now.

'Normal spanners?' Recent standardisation? Not sure I agree with any of that.

British cycle threads have been standardised (BSC) for about a century. The reason your 'normal spanners' didn't fit bicycle parts is because there is no such thing as a 'normal spanner'. Spanners in BSW/BSF sizes (not AF, not metric ) also fit BSC threaded parts when they are made to standard. The standard covers axles, pedal threads, seat binder bolts etc as well as BB and headset threads. Most of this standard is no longer used, we are left with pedal, BB and headset threading, along with quill stem sizing and main tube sizes.

Raleigh's use of 26tpi bottom bracket and headset threading is viewed as a proprietary standard but it was arguably more in spirit with the rest of the BSC standard, in which 26tpi was the norm, not 24tpi. But 24tpi won the day for headsets and BBs (in BSC) and this is now the ISO thread pitch for bottom brackets and headset threading (unless it is 1-1/8" threaded in which case it is 26tpi again....

Arguably Raleigh abandoned the use of their own BB and headset threading in response to pressures of manufacturing cost. Faced with the choice of manufacturing their own parts (which were of excellent quality for a very long time) or buying commoditised (BSC, JIS etc) partsmanufactured in low wage economies they eventually chose the latter route. Interestingly they tried for a while to make 26tpi parts more cheaply, using a plasma nitriding process to make hard bearing surfaces. This was entirely inappropriate technology to use in highly loaded bearings because the bearing surfaces would quickly suffer subsurface fatigue.

Today every other 'designer' seems to fancy a go at a new BB or headset type, which they often have the brass neck to refer to as a 'standard'. Most of them are rubbish. Metric is the new 'normal' so most bike parts are made with metric sized hexagons etc on them, but this isn't necessarily part of any standard, whereas BITD those 'funny-sized spanners' were.

To fit a HT-II BB to a narrow BB shell, I recommend that you use a MTB type BB assy (which has longer cup threads and comes with spacers) and space those cups to suit the (road?) crankset you intend to use. NB you will probably have to do something with the centre sleeve to make it fit.

Ok, I'll yet again bow to your knowledge Brucey.

Spanners of AF Metric sizes now fit bikes.
They didn't before, and neither did Imperial AF sizes either.

"Normal" to me are Imperial AF and Metric AF.

SA track nuts have always been (notionally) the same size. The reason modern 15mm spanners seem to 'fit' older track nuts may be because modern spanners are mostly a bit crap, rather slack fitting. A really well made 15mm spanner will need to be forced onto a correctly made BSC sized track nut.

When I was a kid my father's toolbox contained a beautiful set of BSW/BSF sized 'King Dick' spanners. These used to fit everything on old bicycles perfectly, as intended, because BSC used the same size spanners. However it used to confuse the hell out of me, in that the spanners were marked with the intended thread sizes, which were (for historical reasons) different between BSW and BSF. Even today I am liable to get hold of the wrong spanner unless I'm thinking very carefully about it.

This chart shows what is going on; BSC uses the same size spanners as BSF I think. 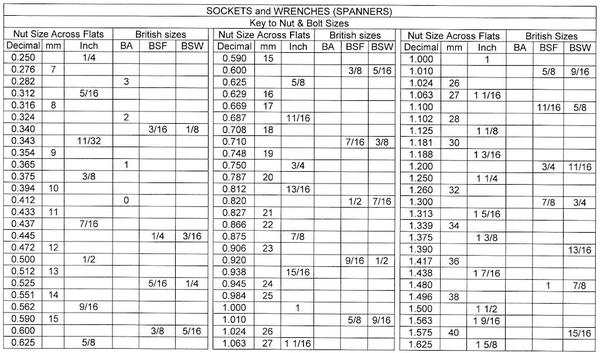 Yes, BSF and BSW spanners are the same.

As a yoof, I bought a set of Imperial AF spanners from Halfords in Wigan. Must have been mid to late 60s, and I still have them.
It was then, that I found out none of them would fit my bike.

The spanners all did sterling service when working on cars though. Ran Mini's and Imps for years, and before that a Sceptre and a Hunter, and it wasn't until we bought a Peugeot that my spanners were retired.
Mick F. Cornwall
Top
Post Reply
13 posts • Page 1 of 1