Recently I was sent (a link to) this route https://cycle.travel/map/journey/186994
In conversation with the sender, it transpires that I received a rather different route to the route which was sent. That sounds barmy, so I'll explain.
If you toggle the "Paths & roads" / "paved only" switch, you get quite different routes.
Now I would expect that switch to be locked for the individual route by the author of the route when they hit "save". Can it be that the route author set the switch to "paved only" but I received the route as "Paths & roads"....?
I think this is probably a question for Richard!
Bike fitting D.I.Y. .....http://wheel-easy.org.uk/wp-content/uploads/bike-set-up-2017a.pdf
Tracks in the Dales etc...http://www.flickr.com/photos/52358536@N06/collections/
Top

If I open one of my saved routes, it shows as it was when I created it.

As soon as I do anything, such as click the road/path toggle, it recalculates the whole route from scratch. based on the start, end, and via points as I entered then, and the OSM network and the routing parameters as they are now.
Top

andrew_s wrote:If I open one of my saved routes, it shows as it was when I created it.

As soon as I do anything, such as click the road/path toggle, it recalculates the whole route from scratch. based on the start, end, and via points as I entered then, and the OSM network and the routing parameters as they are now.

Yes, exactly. Thats what happens when you want to amend a route for any reason. (If I wanted to be extra pedantic, I would say the route is displayed in the form it was last saved.**) The amended route can be saved instead of or in addition to the original.
So I expected to receive a route exactly as it was saved. I didn't expect the road/path toggle to randomly change between the writer and me.......
IF that is what happened. ....??
I tend to ignore the road/path toggle, and just build a route slowly from point to point, using roads or paths as suits, so I'm not expert on the use of that damned toggle!
**EDIT....for example, if you saved a route as "road only" you wouldn't expect it to show as "path and road" when you open it.
If I open a route which starts or ends "off road" (eg black sail hostel, Skiddaw hostel) and try to change the toggle to "road" then I get an error message.....also with routes with a waypoint off road, it wants me to amend that waypoint if I want to change to road only.
Bike fitting D.I.Y. .....http://wheel-easy.org.uk/wp-content/uploads/bike-set-up-2017a.pdf
Tracks in the Dales etc...http://www.flickr.com/photos/52358536@N06/collections/
Top

When you save a route, cycle.travel saves the exact line of the route you planned. Loading that route again will get you the same route, exactly as you planned it.

If you then edit the route in any way, then it'll recalculate the route using the via points. That includes changing the paved toggle. If the underlying map has changed - for example, a bridge has closed, or a new path has opened - then cycle.travel might now find a slightly different route between your via points.

(Slight postscript: there are two things that also cause recalculation you might not expect. One is showing elevation, because the elevation comes from the routing server. The other is exporting to Garmin Connect, because that needs elevation too.)
cycle.travel - maps, journey-planner, route guides and city guides
Top

Hi Richard, thanks for responding.
Have a look at the route in my original post. Its quite different depending on how you set the road/path toggle.
The author of the route (intended to) send me the route as "road only".
I got a route which was "path & road".
So either the route altered in the sending, or the author saved (sent) the wrong copy (or multiple copies).

I'm guessing the road/path toggle is fixed for an individual route when you hit "save".
Bike fitting D.I.Y. .....http://wheel-easy.org.uk/wp-content/uploads/bike-set-up-2017a.pdf
Tracks in the Dales etc...http://www.flickr.com/photos/52358536@N06/collections/
Top

When I click that link, I get an on-road route, with "Paved only" set. See attached.

The link you gave is to one of your routes - is that what you meant to send? 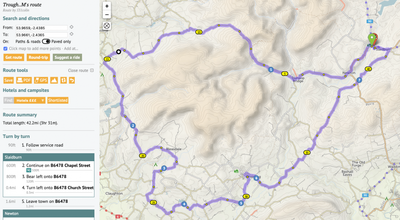 I really am confused now.
This is the original route https://cycle.travel/map/journey/186357. (we know about the blip at waypoint 2)
I now get it as a "road only".....which it should be.
I guess its possible I accidentally switched the road/path toggle? (its quite a small target!) I think I'm happier with that explanation rather than it somehow changed itself.