For discussions about bikes and equipment.
Post Reply
42 posts

Provided there is no slack in the outer cable the levers will work well - i've fitted to not just my own but a good number of customer bikes over the years.
Convention? what's that then?
Airnimal Chameleon touring, Orbit Pro hack, Orbit Photon audax, Focus Mares AX tour, Peugeot Carbon sportive, Owen Blower vintage race - all running Tulio's finest!
Top

Pretty sure it can be done, just the bar top levers will be "in parallel" rather "in series". Or "additional" rather than "interrupter".
Top

Parallel that would be a bit more trouble, would need another line , interupt type is used on rallye cars to break the main line to the rear brakes to enable a powerful handbrake action on the rear discs without annoying the rear circuit to the back brakes... back in the day we used the master cyclinder off a hillman imp .625 Girling from memory, in one end and out the other, but in those days it was working a big drum on a live axle in a car that had perhaps 120/150 bhp and weighed less than 1000kg , now days the weight is similar or tries to be.. now 200/300++ bhp is normal with 4 wheel drive..with 10'' plus discs on the rear axles.. will
Top

Shimano introduced them with GRX. I assume they’ll work with other Shimano hydraulic systems too, but I haven’t checked.
Top

Thanks..I Had a look, and at the dealer install procedures reckon i'll try one for a rear brake which i don't use much anyway... let you all know when I have it mastered..just ordered from Tweeks 48 home for a rear.. I have no room for a right side...pics later will
Top

Well, I removed the interupter levers and the brakes now work loads better....but not necessarily for that reason!

However, having said in the OP that I didn't ever use the interupter levers I now realise that I did.....not for stopping but rather when getting on the bike to hold it still on hills....was using them without realising it!
BNB Community Cycling
Top

another rider who has gotten used to using interrupter brake levers, really like having them.
As stated by others Si, the cable just runs through the setup, so no friction really. Ive replaced cables on the first bike that had them with cantis and rim brakes, and also installed them also on a touring bike I built up a few years ago with mech discs. 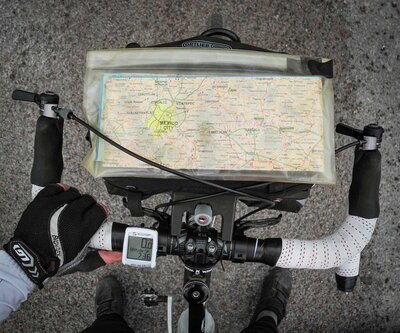 That certainly is a distinctive set up, Si! And yes, braking from above the hoods is never as powerful as from below.
Top

Elcani et al...So since that interesting comment about the availability of the hydro interrupter brake levers I ordered a left to place in the rear brakeline.. then I had to wait while a good friend who is a knowledgeable machanic cars m'cycle and cycles had occasion to call and we started to do the biz on these brakes, line cut after u had set where I wanted the lever to be, now my bars are 31.8 dia 50cm's designed for gravel use and allow me great access as I am running a Bafang motor with all the associated switches and display placed forward of the bars. that done we attached the hoses correctly fairly straightforward so far then we had to drop the bar, tilting it down until it was more or less parallel to the floor pull the hood of the 11sp left lever back to access the small nut which seals the master cyclinder, then attached the yellow shimano canister and fill with the red mineral oil, then lift and position the rear of the machine onto a chair to access the caliper and also to stop air getting trapped, and then because Shimano did away with bleed nipples and the new system is a bloody faff session, remove the caliper and have it swinging on the hose, no way is this a one man job, well thats how we feel... and then with the appropriate kit of syringe and tube attached start the bleeding process, David my assistant said it would be useful to have a small bleed nipple on the cross top m/cyclinder, none evident but yes there is a security torx and pin headed effort on the corner, we left it alone this time, bleeding up didn't do the job so we tried down that had more success and then when we had a decent lever I said lets go again and we lost the pressure and eventually got a decent but not perfect pressure at the bar and a sort of ok at the cross top lever.. as I was riding the next day I left it at that.. more to follow with pics..It was ok cycling today with the Sti lever less so with the addition. it braked but nowhere near as much power... will
Top

Reservations with respect to effective braking presumably do not apply to these "X-levers"...
byyeee,
SiE
Top

I might have been, but not with the bike. I had 1.3km of orange hazard fencing and associated road irons in the back!
BNB Community Cycling
Top
Post Reply
42 posts